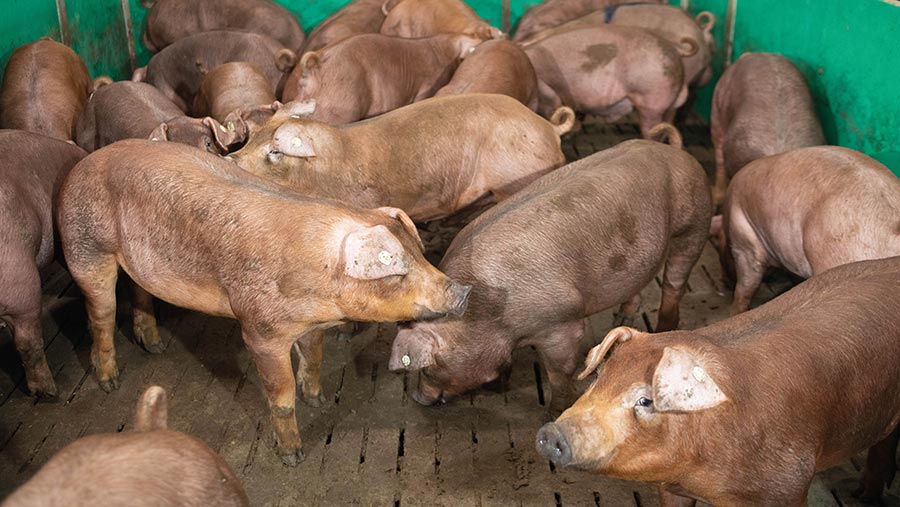 Aggression among grouped pigs can cause stress, growth checks, suppressed immunity, injury and even death.

On some farms the problem can escalate to affect whole herd performance, disrupting production.

At the same time, lowered immunity increases the likelihood of disease, explains Dr Turner, a senior researcher in animal behaviour.

Lesions, in pigs that have suffered sustained attacks, may fuse together to form large pink patches, each representing up to about 100 bite marks.

Other signs in victims include exhaustion and lameness.

The injuries suffered are presumably painful and the conflicts stressful, so it is a significant welfare issue for the animals involved, Dr Turner suggests.

Why does aggression occur?

Pigs fight to assert their dominance over other animals in the herd. When pigs are mixed in groups, there is no noticeable difference in the behaviour of the different genders.

However, trial work with two animals in a neutral pen has revealed different patterns of aggression, and that male pigs are several times more aggressive.

While males take longer to engage in an attack, once they do fight, they don’t back down and injuries sustained are more severe, says Dr Turner.

This pattern harks back to male breeding competition for females in wild herds, where significant bouts of combat occur to assert dominance and breeding rights.

Genetics also influence aggression levels. Studies have found that 20-40% of aggression in pigs is linked to genetics, with the remainder due to the environment.

Key environmental triggers within already stable groups include shortages of a resource such as space, feed, water, warmth, and dry or clean areas in the pen.

When does aggression occur?

Most attacks occur when a stable hierarchy changes. Therefore, most aggression is seen in the first 24-48 hours after groups have been mixed together and unfamiliar pigs come into contact for the first time, Ms Oldham says.

After this time the group generally settles.

However, SRUC has raised concerns over an emerging trend where extreme attacks are occurring in stable groups of pigs.

Seen worldwide, the attacks are typified by groups of pigs singling out an individual within a pen. The attacks are prolonged, ferocious and result in the death of the victim.

Why this has started to happen we don’t know – but it is a global phenomenon, Dr Turner says.

A recent SRUC survey showed that many UK herds had already seen incidences amid a rising trend.

The SRUC has launched an investigation and Dr Turner has urged any producers with experience of the issue to contact researchers.

How can farms reduce aggressive outbreaks?

Most farms mix litters of pigs into groups immediately after weaning.

This is where aggression can often first show up as pigs fight to regain dominance within the newly formed groups.

However, research has shown that aggression within established litters is low and levels remain suppressed up to weaning.

This behaviour provides an opportunity to limit fighting at mixing by introducing litters at about two weeks old while they are still on the sow.

Opening a piglet-sized hole in the barrier between two adjacent pens, allowing piglets to mingle, allows them to form stable groups before aggressive behaviour kicks in.

There is also evidence that early social mixing enhances social skills, which are retained. This means less aggression is seen even when early socialised pigs meet new, unfamiliar pigs.

Although regrouping pigs later in the cycle allows farmers to manage feeding regimes more accurately, it can lead to significant aggression and stress among batches, Dr Turner says.

It can also increase the risk of spreading disease, so ideally regrouping should be avoided. Where there is no alternative, pigs should be regrouped as young as possible.

Optimising space is extremely important – particularly at mixing. Pigs need enough space to be able to retreat from an aggressor.

With an area to escape into, any battles are more likely to be short-lived, allowing the hierarchy to establish with less stress and injury.

Barriers can also be included if a pen is large enough to give the beleaguered pig somewhere to retreat to. Boards or straw bales can significantly reduce injuries.

Further enrichment of the pen, to occupy pigs and distract them from fighting, can also help.

However, SRUC urges caution on what is supplied. Toys can be successful but can also become objects that pigs will fight over, says Ms Oldham.

It is better to offer something like straw that cannot be dominated by one or two aggressive pigs, she suggests. 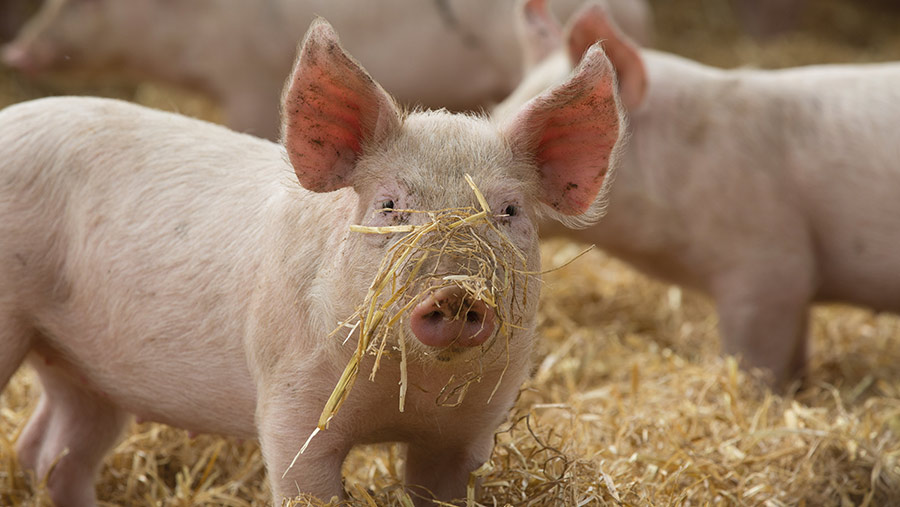 Any resource that can cause competition should be considered when looking to limit aggression.

Water bowls, feed or warm, dry areas are all potential flare points. Each of these must be provided at levels where one pig cannot dominate, and pigs do not have to fight to gain access.

Aggressiveness is a heritable trait and should be accounted for in a farm’s breeding policy.

The behaviour of potential replacements should be monitored carefully during rearing. SRUC suggests scoring aggressive behaviour in gilts, where a score of zero is non-aggressive and five is highly aggressive.

Any gilts with high scores should be considered carefully before they are taken into the breeding herd.

Lead researcher Lucy Oldham says: “A key aim of this study was to find out what being an aggressive pig is like for the pig – which is really important when it comes to solving the problem of aggression on farms.

“We wanted to know whether or not some pigs carry on being aggressive because they are less emotionally affected than others by the consequences of fighting.”

Scientists recorded the body language of the pigs to assess their emotional state in a dynamic social situation, especially when confronted with unfamiliar pigs.

Ear posture, direction of gaze, grunts and squeals were measured to estimate the impact of winning or losing a contest when paired with an unfamiliar pig.

Results showed that a fight influenced how the animals reacted when they were next put into an “unfamiliar pairs” situation.

Non-aggressive pigs were significantly more affected by winning or losing a conflict and learned from the encounter.

Rather than being fearless and over-confident, research showed highly aggressive pigs experienced more negative emotions than low-aggression animals when confronted with a strange pig. They were also less likely to have learned from past defeats.

“Overall, our results showed that the welfare of aggressive and non-aggressive pigs suffers,” says Ms Oldham.

“And this makes finding ways to reduce aggressiveness even more important on farms through providing social and physical environments that reduce hostile behaviour.”

The study was carried out in partnership with Queen’s University Belfast, University of Edinburgh and Polish Academy of Sciences.