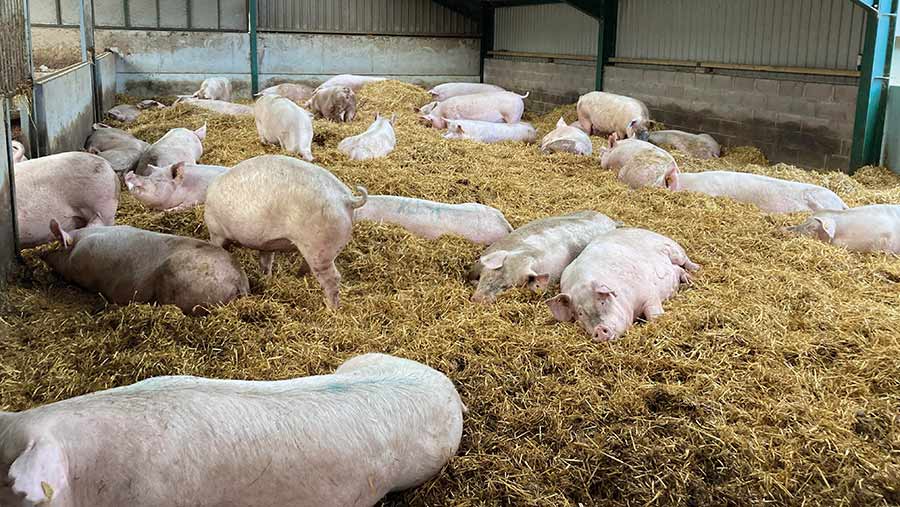 Adam Marshall, who farms alongside his father Adam and brother Charlie is committed to a future in pig farming. Together they are increasing their pig herd from 215 sows to a 280-sow indoor farrow-to-finish unit in the Scottish Borders, with an approach based on continual review and improvement and an openness to trying new ideas.

Overall aims are to improve efficiency, minimise risk and retain as much control as possible over production costs and margins. They prioritise pig health management as the foundation of the herd’s performance and add value by marketing a proportion of pigs through their own hog roast shops.

Close collaboration with neighbouring arable farmers helps to share costs and resources. The herd expansion has included investment in a freedom-style farrowing system to help further improve productivity and futureproof the business against changes in welfare legislation. 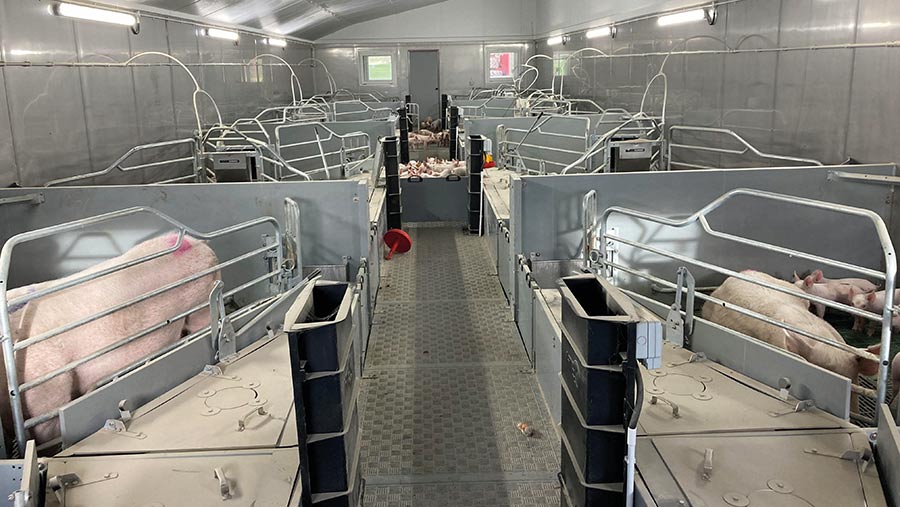 The pig unit is mainly slatted, with dry sows and gilts housed on straw. There are electronic sow feeders for the dry sows and gilts and an ad-lib system for all farrowing sows, while growing pigs are on a Schauer Spotmix phased wet/dry feeding system.

“We’re always thinking about where we can be more efficient and use technology, where we can, to help reduce labour,” says Mr Marshall.

Based on DanBred genetics, the breeding herd is achieving an average 17.6 piglets a litter born alive and 15.9 pigs weaned a sow, with a forecast of more than 32 pigs sold a sow a year to the end of 2021. 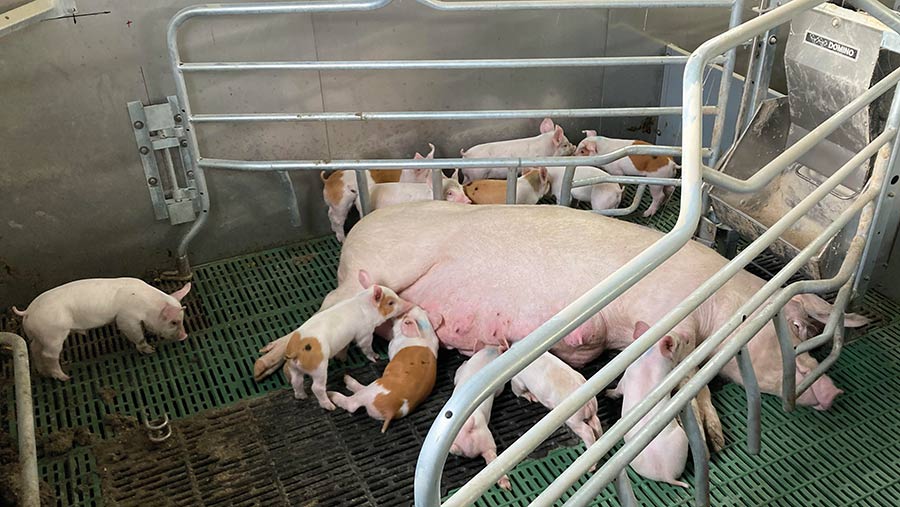 Protecting pig health is a key priority for the business, he says. “Disease issues can really affect financial performance, not only because of cost of treatment but because pigs are slower to grow and need feeding for longer.”

Strict vaccination and biosecurity measures are in place to prevent disease, following significant investment in new buildings across the unit and restocking with high-health pigs in 2012.

The family run an all-in all-out system, with rigorous cleaning and disinfection. Every farrowing room has a one-week break between batches to help reduce the risk of disease. A PTO-driven twin-lance pressure washer helps with a quick turnaround before disinfecting, allowing time for pens and equipment to dry properly.

They are also very careful about movement of vehicles. For example, the minerals lorry doesn’t come on-farm as deliveries are made at the entrance. No livestock lorries come on to the breeding unit as the farm has a trailer to move pigs to the separate finishing unit.

Boots are changed and disinfected between sheds and clean overalls are always worn when entering the pig unit.

Bought-in replacement gilts are quarantined for four-and-a-half weeks, well away from the Marshalls’ unit on a beef and sheep farm in the Lammermuir Hills, where they are health-tested before entering the sow herd.

Sows are given a combined vaccine for erysipelas, parvovirus and leptospirosis post-farrowing. This is also given to gilts on arrival. No other sow vaccines are used, and this minimal level of vaccination saves costs, says Mr Marshall, with each vaccine costing around £1 a pig.

Zinc was removed from post-weaning piglet diets seven years ago and, while they see a small amount of loose faeces, the situation is manageable. “The strength and weaning age of piglets is crucial and we regularly check the pH of water in the weaning pens and acidify it to maintain the right level,” he says.

Oedema disease and Lawsonia are the two main diseases that currently pose a problem and vaccinations are used successfully against both. The farm was one of the first in the UK to use the injectable Lawsonia vaccine in weaners 18 months ago, and it has proved more consistent than the oral vaccine used previously. 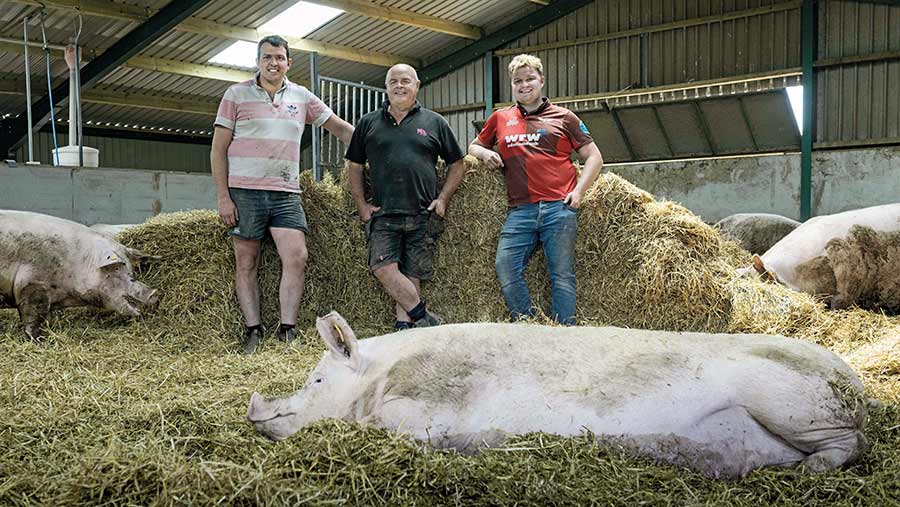 “With three of us needing to make a living from the 210 acres owned, collaboration and contract farming locally has helped make the business more sustainable,” says Mr Marshall.

Pigs are moved to a neighbouring arable farm for finishing, with two of the sheds owned by the Marshalls and the other two rented. They also share machinery and labour in a contract arable farming agreement with a neighbour, whose rotation includes rye and barley, which are fed to the pigs. Around 40% of the diets are made up of homegrown cereals and also include co-products from a local cereals mill.

The neighbour also benefits from spreading pig slurry from the finishing sheds on the arable ground.

In the late 1990s, when pig prices were very low, the family set up a farm shop in partnership with a good friend and sheep farmer, to diversify and add value, says Mr Marshall Snr. When foot and mouth made the farm shop unviable, they bought two existing butchers’ shops before going on to start Oink, their hog roast business, in 2013.

They now have three shops in Edinburgh and keep their offer simple, selling teas, coffees, beer and takeaway hog roast rolls. Currently, they are selling around 25 pigs a week through Oink – only around half the amount pre-pandemic – with tourism yet to recover.

A small number of pigs goes through their own butcher via meat boxes and the rest are sold through marketing co-operative Scotlean. They benefit from having more than one route to market, which helps balance risk.

The farm has 32 new freedom-style farrowing pens that allow the sow to be temporarily closed in to protect the piglets around farrowing time. The Marshalls limit this period to six days, from just before farrowing.

With good management, piglet mortality has been very similar so far to their conventional crates, Mr Marshall reports. Piglet weaning weights have improved by at least 500g on average; sows are lying more comfortably in the new farrowing pens and their feed intakes have increased.

While it has been a large financial investment, he believes it’s the right move in the longer term, improving both sow and piglet wellbeing and productivity. “You also see a difference in the pigs coming through to finishing, starting with a stronger piglet at weaning,” he says.

The family plan to build more grower accommodation when funds allow. It has always been important to them to fund investments themselves rather than borrowing, wherever possible, and they have also carried out a lot of their building work themselves.