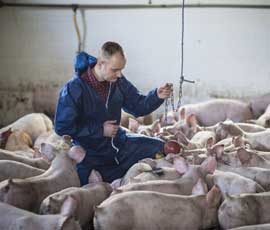 Changes have been made to BPEX’s Real Welfare Protocol which features in the Red Tractor standards with immediate effect.

The protocol which was introduced into Red Tractor standards for pigs on 1 April 2013 assesses pig welfare by looking at outcome based measurements such as body lesions and lameness levels.

The Real Welfare Protocol Review Group was set up to review the standards six months after introduction and have put forward recommendations which will take place with immediate effect.

The main change has been to suspend the “environmental enrichment” portion of the protocol.

Speaking to Farmers Weekly, Red Tractor technical manager Catherine Lehane, said: “Enrichment assessment required a vet to stand on the outside of the pen and assess use of enrichment. Often pigs would be jumping up or couldn’t be seen, so data was coming back that wasn’t valuable.

“Now BPEX and the review group are looking at redesigning the element which looks at what proportion of the pigs are using enrichment, so the data collected is valuable and meaningful. This element of the protocol will be suspended until February 2014,” she said.

The review group has also raised concerns over the difficulty measuring minor body lesions and will be considering the value of the extra information.