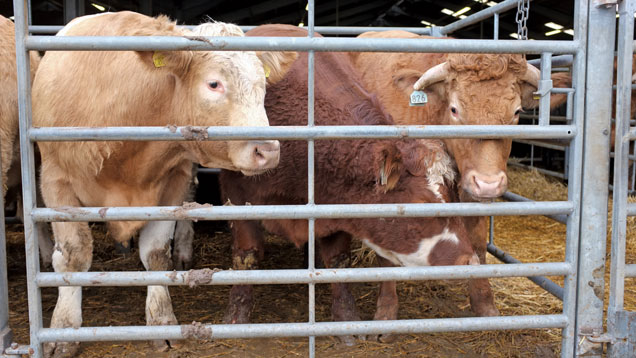 Like the curate’s egg, 2014 has been good in parts for some livestock producers, but others have had to cope with the significant price fluctuations of an unpredictable market.

Ample supplies of grass and forage were the pay-off for the long summer and balmy autumn, but worldwide market forces demonstrated the ever growing vulnerability of the UK livestock sector.

Milk producers set off on a high note, but ended the year with their milk price in a place no one had expected.

Sheep producers enjoyed a strong trade for hoggets sold in late spring – and even their spring-born lambs were ready earlier and sold well – but late season prime sheep prices were disappointing.

Suckled calf producers saw prices hold up in excess of expectations in the autumn and while beef finishers have struggled to make much of a margin all year, the end of year trade started to deliver a small but desperately needed upswing in returns.

Milk prices of 34p/litre and more certainly underpinned confidence among dairy farmers in the early part of 2014. And even when the milk market started to wobble there was only a marginal impact on the prices being paid for dairy cattle.

“Throughout most of the year the trade has been very strong with good quality calved heifers steadily making about £2,000 and even up to £2,500,” says Meg Elliott who sells up to 80 head every week at Leek Auction Mart and more than 100 head at the mart’s monthly pedigree sale.

Trade continued to be so keen for the top-end cattle for most of the year that some buyers weren’t able to keep pace – a situation that led to a sustained demand for second quality sorts.

The firm demand for dairystock during 2014, even with the weakening milk price, undoubtedly fired-up business for importers.

With good quality imported in-calf heifers available at about £1,500, it’s a route that was a clear favourite for thosebusy with larger herd expansions.

A late-November sale average at Leek Auction Mart saw the best 25 fresh calvers level at £1,900, but the autumn did bring the initial signs of hesitancy among milk producers. It meant the first significant dip in demand for for second and third quality dairy cattle.

The January hogget trade saw average prices at around 175p/kg but by mid-February demand had pushed up returns by about 20p/kg. By late March the market had improved even further.

“Things got very dear with big, heavy hoggets making up to £110-115 and even up to £120. Plenty of good Cheviot types were clearing £100 apiece,” says Harrison and Hetherington auctioneer Mark Richardson based at Kirkby Stephen, Cumbria.

And the high prices buyers had to pay for late season hoggets set the trend for the first spring lambs to hit the market. The good spring weather was a boon for sheep producers and lambs romped on with many coming ready for market several weeks earlier than usual.

On this lively trade a lot of lambs were making £2/kg and more at the start of the new season with increasing numbers of producers deciding to sell at lighter weights at about 36-38kg.

“Some of the 40kg lambs sold in late May and into June were making about £90, so it was tempting to sell earlier and at these lighter weights. And the best of these lambs were making more than that. It was a tremendous trade,” comments Mr Richardson.

Good weather and plenty of grass ensured markets were well supplied with big numbers of lambs in early summer and the trade held up surprisingly well.

The summer lamb trade produced its seasonal fall to take market averages to about 160-170p/kg; by September it was sticking at about 150-160p/kg or even less at some markets.

But late November saw the prime lamb trade show signs of firming and it climbed back to more than 170p/kg with numbers forward in the South being noticeably tighter at several markets. In particular buyers were commenting on shorter supplies of prime lambs coming out of Wales by late autumn.

Some markets saw prime lamb prices increase steadily during November, with values for commercial types – not just the top-notch export lambs -increasing by £5 a head every week at some centres as major buyers waded in to secure supplies well ahead of Christmas.

But there’s always been a good trade for the very best this year. When averages were at 160p/kg, those producers with top-quality lambs to sell could still make £2/kg.

The cast ewe trade has been one of the talking points of the year. While there were some minor fluctuations in returns there was no marked fall in prices all year. The best cast ewes have made up to £225 a head and even old tups have been nudging £150. Cull-ewe cash certainly helped reduce the bill on flock replacements this autumn

The mid-summer “barometer” sales of breeding sheep in the south west and Midlands sent a positive message back to hill producers who had North of England, Welsh and Scotch Mule lambs to sell in the autumn.

The lift of around £10 a head at some of the early season shearling sales in the south – and ample late summer grass – set the scene for some confident trading.

But the demand for running lambs created a real buzz during the autumn’s north fixtures with many sales seeing averages of about £85 a head. Averages at most gimmer lambs sales were on a par with the year before or marginally up with many centres leveling lambs at £100-105.

And even at the late autumn offerings of draft ewes there was plenty of demand to keep up prices. At one of the main sales of draft Swaledale females in Cumbria the average price paid for ewes and shearlings was up £43 a head compared with the year before.

Without doubt beef producers have had one of their most challenging years and while it was only in late autumn that the first signs of improvement were noticed, the prices being paid for store cattle and suckled calves have remained strong.

Auctioneer Paul Gentry has one of the biggest UK entries of prime cattle to sell every week at Newark Livestock Market. “The greatest worry is the future of the suckler cow herd in terms of maintaining a supply of cattle for finishers,” says Mr Gentry who has been selling about 500 head of cattle a week.

Clean cattle prices at Newark in late November averaged £2.20/kg with the better end of the trade at £2.40- £2.70. It was the result of a slow improvement over the previous six weeks of about 10-15p/kg a week.

Prime cattle prices started to dip in early 2014 with deadweight prices tumbling to as low as to £3.10/kg – that was about 80p/kg down on the year.

But the good summer could not have come at a better time for suckled calf producers who were heading into their main income earning period facing a weak prime cattle market.

Finishers showed great resilience and commitment and at many sales their determination to fill yards for the winter pushed prices up by £50-100 a head for the better calves.

At the big suckled calf sales in Scotland and the north prices held up well with calves looking as good and as well grown as they have for many years. Even at sales where prices were only marginally up, in terms of value for money these well grown calves were heavier and fitter.

Plenty of the best steer calves were making £1,000-1,200 at the major fixtures in northern England.

It hasn’t been an easy year for pig producers. In April the finished pig price increased for the first time since October last year to 163.47p/kg, but the market has had to cope with the impact of low-priced imported pork supplies even though volumes were only slightly higher than in 2013.

Eblex marketing statistics show that by May there was a further slow, but steady recovery in finished pig prices, which reached 164.23p/kg by the middle of the month. Prices rose during the summer but the fell again to 156p/kg in September and down to 152p/kg in October

Weaner prices hit their lowest level for over a year in September when they reached an average of £52.34 per head for 30kg pigs.