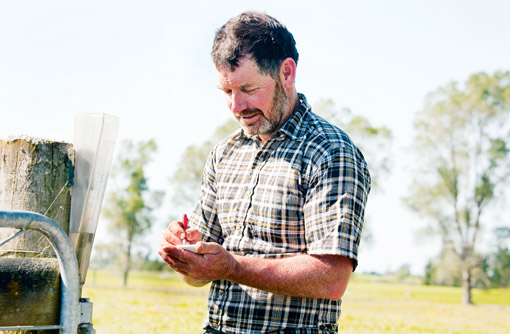 Soil temperature is three degrees below normal after low sunshine hours in February and cool nights. The organic maize crop is running three weeks late, which will mean late sowing of new grass.

The first grazing is now likely to be spring. Weeds in the maize crop have seriously reduced the yield and thought has been given to harvesting early and sub-optimally to get the paddock back into grass ASAP. The heat loving plants in the garden like tomatoes, beans and pumpkins have all called quits.

Cows are still milking well with Sharon’s herd producing low 1.8s of milk-solids, supplemented with PKE and Andy’s 1.7s supplemented with silage. Andy is achieving record low cell counts, which is pleasing as these can become a real issue towards drying-off organically. Grass growth has dropped away due to soil temperature and moisture. Both farms have received autumn fertiliser, composted chook manure on the organic farm and standard N and superphosphate mix conventionally.

Empty rates on both herds are disappointing given both herds cycled extremely well – 11.5% conventionally and 15% organically. Both these numbers are in keeping with previous years and it seems hard to achieve very high cow performance and high in-calf rates on grass alone.

Painting of the dairy is well under way on Sharon’s farm along with a new garage. We are waiting on a bulldozer to push out rhyolite rock for the races on Andy’s farm. In the meantime, the effluent pond has been pumped and fences upgraded.