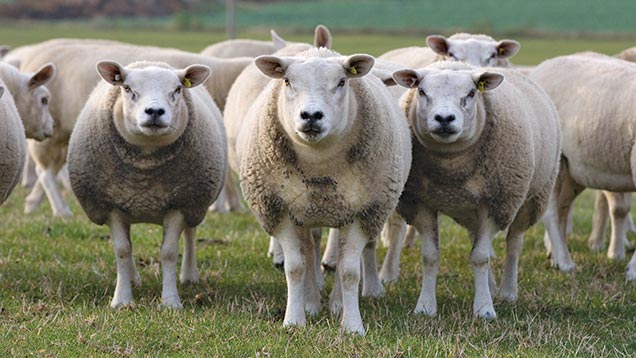 Plans to introduce a combined breed analysis in sheep in a similar manner to the dairy evaluation have been met with some reservation from the UK sheep industry.

UK genetic evaluations of sheep have traditionally been undertaken within purebred populations.

However, with a stratified sheep industry and more than half of ewes in the national flock cross-bred, requests for a cross-breed estimated breeding values (EBVs) from these cross-breeding flocks are increasing.

A combined breed analysis for terminal sires, which Signet breeding manager Sam Boon hopes will be implemented for the 2016 lamb crop, will see all terminal sire breeds analysed in one database for the first time. This is rather than each of the 12 breeds having its own analysis completed at regular intervals throughout the year.

The proposed benefits of combined-breed evaluations are:

Rates of genetic improvement can also be increased indirectly through the provision of a more efficient service.

Mr Boon adds: “The biggest potential gain from this is that we’ll be able to do a best linear unbiased prediction (Blup) run for all breeds possibly as often as once a fortnight.

“At the moment we do runs for individual breeds three or four times a year, which can cause bottle­necks, such as getting all the ultrasound scanning data collated in the necessary timeframe,” he explains.

However, while all Blup runs will be completed in the same analysis there would still be differences in the way the various indices are calculated for each breed, says Mr Boon.

“At this stage we’re not looking to use the same parameters for every breed as there are existing differences between the calculations used for different breeds which have been implemented at the request of breeding groups and for the benefit of the development of those breeds.”

Mr Boon says the main driver behind the change is a desire to increase the number of Blup runs available to breeders and give them more flexibility with data input.

“Additionally, to keep breeding indices realistic we need to rebase them this year and it makes sense to improve them while we’re rebasing,” he says.

The cross-breed analysis will also allow accurate EBVs to be calculated for the increasing number of cross-bred rams being produced, says Mr Boon.

“At the moment these animals are pulled out of the purebred data set and dealt with separately. However, by undertaking a combined breed analysis it will be possible to improve the quality of the EBVs available for these sheep by including the genetic data of their sire and dam, giving a true picture of their potential genetic merit.”

But, initially at least, the switch still won’t make it possible to compare between breeds, says Mr Boon. “That isn’t the aim at the moment and the lack of meaningful linkage between the various breed populations will limit the usefulness of any comparisons between breeds at the moment.

“The establishment of commercial progeny tests which we’re aiming to have up and running by tupping this year will help with this and also help feed more commercial information, including abattoir data, back in to the performance recording process,” he says.

And those fearful that cross-bred sheep could have inflated figures due to the benefit of hybrid vigour have nothing to fear, he adds. “The analysis will be able to strip this factor out of the data and give a true genetic evaluation of the animals.”

Mr Boon says cross-bred producers will only be able to access the data if they buy recorded rams in the first place. “I’d hope any current recorders would see the benefit of selling to cross-bred ram breeders as it could in time provide them with increased data accuracy, too.

Christow, Devon-based Suffolk, Texel and Exlana breeder Peter Baber believes the introduction of a cross-breed analysis could be a major step forward for the sheep industry.

“Once sufficient connectedness has been established between the relative breed populations it could be a very exciting time for the industry. Being able to compare key traits across breeds will help commercial buyers make far more informed decisions than at present.

“And provided the hybrid vigour effect can be excluded from the analy-­
sis of cross-bred animals then there shouldn’t be anything to fear from their inclusion in the analysis either.”

“A combined breed analysis could benefit everyone by accelerating genetic improvement and increasing the accuracy of EBVs. Additionally, it could allow more intense selection as the gene pool to choose the next generation can be substantially widened,” he says.

However, there are some concerns about a combined breed analysis.

He says: “Commercial buyers are used to the figures increasing year on year in a logical fashion. Suddenly pulling the figures back down again could be very confusing for them and potentially misleading, with major breeding companies currently marketing rams with high figures that are incomparable with those produced by Signet.

“Unfortunately, commercial buyers are largely unaware that these figures are incomparable, leaving our members at a potential disadvantage,” he explains.

Mr Yates is also concerned that the combined breed analysis will gift more than 25 years of private investment by breeders in performance recording to new breeders making little to no investment in long-term breeding programmes. He says this should be carefully managed.

He adds: “The fashion to produce cross-bred sires could have a significant detrimental affect on the desire for consistency in slaughter stock too, the benefits in this area offered by current terminal sires are clear.”

However, Mr Yates does welcome the potential for fortnightly Blup runs as he says it will be a major step forward and remove a significant hold up in the current system.

“With more than 16,000 lambs requiring ultrasound scanning every year in the Texel breed alone, removing any bottleneck in the system would be major advance.”

Biggar-based Texel breeder Robert Laird, who has been recording his family’s Cambwell flock since the early 1980s, says the move to a combined breed analysis needs to be done without hindering those already recording.

“So long as we can keep the parameters we have at the moment it won’t be an issue. But if it changes to a one-size-fits-all policy then it may be detrimental.

“The calculations required by different breeds and groups of breeders will always be unique due to the different issues affecting each breed.

“This is ably demonstrated by CT scanning, as certain breeds carry more internal fat than others. While ultrasound scanning of backfat levels has helped some breeds reduce fat cover, few can match the Texel for overall meat yield and meat:fat ratio due to the lower internal fat carried by the breed.”

Mr Laird says some breeders will also be concerned by cross-bred tup breeders suddenly having the benefit of the data they have built up over many years of recording. “We’re not in the business of proofing other people’s tups for them. We’ve invested heavily over the past 30 years and I wouldn’t want to see that hard work diluted.

“What I’d really like to see is the data easier to interpret for commercial buyers. If it can deliver that then there could be some benefits,” he adds.