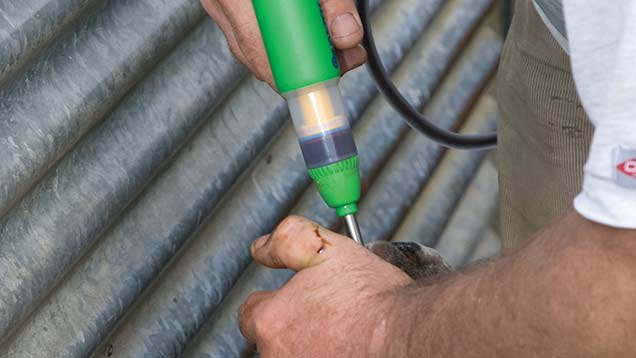 Experts are warning  farmers against routine drenching of sheep for worms due to ongoing resistance issues.

A good worming strategy is essential to prevent lamb deaths and production losses this spring. But a sharp rise in wormer resistance is changing the recommended approach to preventing worm infestation at this critical time of the year.

Sally Harmer, animal health specialist at Clynderwen and Cardiganshire Farmers, says faecal egg counts (FEC) will flag up if flocks need treating, while drench tests will identify which products are most effective.

“Worming strategies will vary from farm to farm. They can be affected by the weather and must take into account the very real issue of anthelmintics resistance in many UK flocks,’’ she says.

These can be done through your animal health advisor or vet. This should cover 10% of the flock – a minimum of eight to 10 sheep in every group of 100. Sheep should be healthy and have had full access to pasture and/or feed before sampling.

Collect 10 different samples of fresh faeces and keep cool in an airtight container or plastic bag. Deliver to a laboratory within 48 hours. The result will establish the extent and type of problem and may rule out the need for worming.

Use narrow spectrum products when possible and rotate drenches used. When buying-in sheep always use two different products to treat on arrival. Ms Harmer says one of these should be either Monepantel or Derquantel. “Quarantine the new arrivals for at least four weeks to avoid resistant worms being brought on to the farm,’’ she advises.

Read the data sheet, calibrate the drenching gun and dose to the weight of the heaviest animal in the group. Adhere to withdrawal periods if lambs are going for slaughter.

Step 4: Perform a drench test to establish if there is resistance

A quick indication of the efficacy of an anthelmintic can be gauged by laboratory testing faecal samples from 10 sheep following treatment. The time the test should be performed after treatment depends on the anthelmintic used:

“They can be a useful guide and therefore encourage changes in management that can help preserve the effectiveness of other anthelmintics,” says Ms Harmer.

Use low-risk pasture or clean grazing at the start of the grazing season and move to aftermaths mid-season as this can reduce the number of treatments needed.

Traditionally lambs are wormed at weaning and turned on to fresh pasture. Ms Harmer advises against treating every animal if dosing before turning on to aftermath.

“Leaving a percentage of the best conditioned lambs undrenched, 10% if possible, will slow development of resistance,’’ she says.

“A population of susceptible worms should be maintained to reduce the resistant worm population and the speed of anthelmintic resistance developing,’’ she adds.

Using an EID reader to record performance indicators such as growth rates can quickly indicate if there is an issue. “As a minimum you should be weighing and condition scoring the lambs regularly,’’ says Ms Harmer. Target growth rates – lambs should be doing a minimum of 200g/day.

Step 7: Get advice and a plan from a qualified animal health advisor or vet