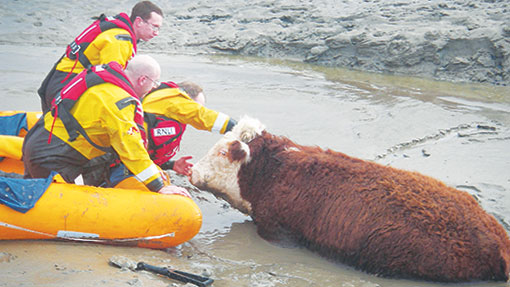 A Hereford cow has been rescued from the banks of the River Lune, Lancaster, after becoming stuck in thick muck following heavy wind and rain.

Morecambe’s RNLI Inshore rescue hovercraft was deployed to the scene to free the animal which had sunk deep into thick mud and was unable to move anything but its head.

The animal was eventually freed using the hovercraft’s mud lance together with water pumped into the mud from the hovercraft’s ballast tanks. The rescue took place just in time due to the rapidly rising tide.

Morecambe RNLI hovercraft crew member Colin Midwinter said: “This operation was an excellent example in demonstrating how the combined resources and expertise of the various rescue organisations can achieve successful outcomes under challenging circumstances.”