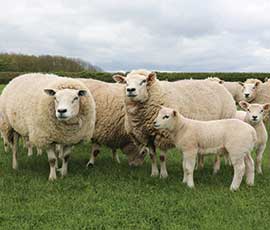 Results from the latest sheep breed survey, which was last conducted 10 years ago, shows significant changes to the type of ewes and rams being used.

Since the last survey in 2003 there has been a decline in purebred ewe numbers, an increase in crossbred ewes and a rise in the Texel as a terminal sire and as part of a crossbred ewe, at the expense of the Suffolk.

Explaining the results at last weekend’s Sheep Breeders’ Round Table, Geoff Pollott of the Royal Veterinary College, London said: “A big contributor to the pure-bred ewes is hill ewes and if we take hill ewes as a proportion of all ewes, then numbers have declined from 57% in 1971 to 31% in 2012.”

“In 1971, when the first breed survey was conducted, the Suffolk was the dominant terminal sire. But as the Texel has come in, it has been at the expense of the Suffolk.”
Geoff Pollott, Royal Veterinary College

Over the past 40 years there has also been a rise in the number of crossbred ewes, with 56% of ewes in the country crossbred. “We’ve seen a dramatic rise in the crossbred Texel, with about 2 million crossbred Texel ewes in the UK. In 1971, when the first breed survey was conducted, the Suffolk was the dominant terminal sire. But as the Texel has come in, it has been at the expense of the Suffolk.”

Dr Pollott believed the industry was moving towards more “efficient sheep” with a rise in the Lleyn.

Twelve composite breeds have also been introduced in the past 40 years with the Meatlinc the most enduring breed with 3,000 ewes and the EasyCare up and coming with 20,000 ewes. “A stratified breed structure is still found in the UK, but the balance is shifting towards more crossbreds,” he said.

On the ram side the Texel is still the most dominant breed with Beltex and Lleyns on the rise, explained Sam Boon of Signet.

“Suffolks have lost 58% of the market share in the last 16 years and crossbred rams now account for 5% of all sires with most crossbred sires consisting of a terminal sire with a bit of Beltex. A quarter of rams are also home-bred,” he added. The highest proportion of home-bred rams came from Ile de France (92%), the Lonk (78%), Beltex cross Suffolk (77%), Easycare (65%) and Exlana (61%).

Keep up to date with the latest sheep industry news