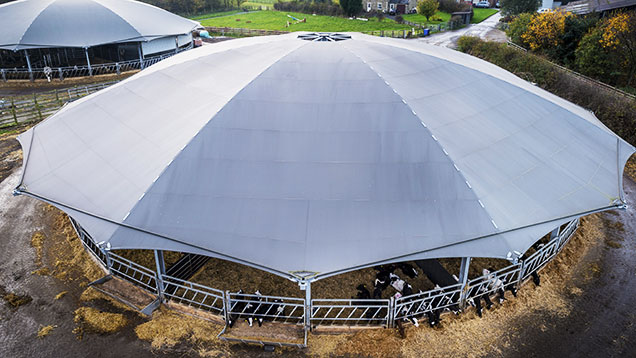 Chris McDonald from Bays Leap Farm in Newcastle says this housing is responsible for his homebred heifers joining the milking herd aged 23 months. This extra month’s milk production was worth £270 a heifer (30 litres at 30p/l).

The system consists of two separate Roundhouses. The first is used for calving and is unique in the UK with its integrated mini-parlour.

The calves are then moved to the second Roundhouse for rearing.

The shell of the building cost Mr McDonald £55,000, but with the additional handling system, electrics and concrete, total cost for the calf-rearing Roundhouse was £150,000.

See how the Roundhouse system works for rearing calves. Chris McDonald installed the first Roundhouse in 2011.

Yorkshire boarded panels can be added for extra protection against harsh weather.

The second Roundhouse was finished in March 2014 and is the only one in the UK to have an integrated milking parlour.

The second building houses dry cows through to one week post calving.

Calves are separated from their dams as soon as possible after calving. The cows are milked and colostrum is collected.

The colostrum is fed immediately to the calf.

Calves stay in the second Roundhouse and are fed freshly collected milk for the next five days.

At one week old calves are moved into the other Roundhouse, which has been modified to include a calf igloo.

The igloo creates a micro-climate which protects the youngest calves from draughts.

The calves quickly learn to use the automatic feeder under close supervision.

As the calves grow they are moved anti-clockwise around each section of the Roundhouse.

The central handling pen facilitates easy management of the calf groups, for example, veterinary checks or bedding up safely.

Can you improve your calf housing? Take our Winter Health Academy and earn valuable CPD points.