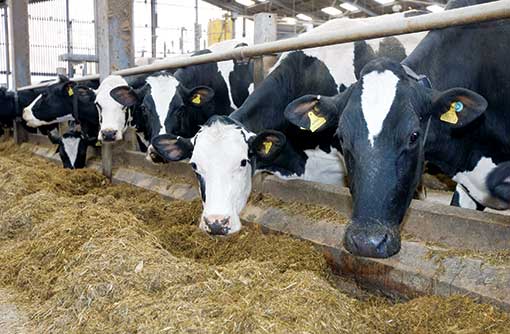 Growing a specific, low potash silage for dry cows could help prevent post-calving difficulties and get cows off to a flying start.

To ensure cows calve with minimal problems, grass silage used in dry cow rations should ideally have a potassium (potash) level of under 1.5%, with overall ration levels at less than 1.3%.

However, vet Richard Vecqueray of Evidence Based Veterinary Consultancy, says it is not uncommon for grass silage to analyse at two or three percent.

This can lead to an increase in retained placentas (RFM), more dirty cows and poor transition into lactation.

Ideally, less than 10% of cows should develop any problems at all after calving.

However, on farms feeding high-potash silage incidence could be as high as 20%, with possibly more than 15% suffering from RFMs alone.

To overcome this problem some producers will opt to go down a dietary cation anion balance (DCAB) route, by adding magnesium chloride to acidify the blood and overcome the potash blocking.

However, the addition of chloride can reduce ration palatability, affecting intakes at this crucial stage prior to calving.

“Farmers without access to low potash silage may also choose to dilute potash levels by adding maize. But doing so increases starch levels, which can be extremely detrimental to dry cows,” says Mr Vecqueray.

Dairy producer Bill Higgins of Wilderley Hall Farm, Pulverbatch, Shropshire, is in agreement. He says producing a low potash haylage for dry cows has “revolutionised” the dry cow period in the farm’s 330-cow herd, leading to a reduction in post-calving problems.

“Cutting a specific crop for dry cows, has got rid of a lot of nasty problems that were difficult to control,” says Mr Higgins, who farms in partnership with his brother Andrew and parents Bill and Margaret.

With 12,200 litres sold a cow a year, getting cows off to a good start after calving is crucial so they will sustain yields and get back in-calf.

“It all goes back to that crucial dry period – it’s the bedrock to the whole system,” says Mr Higgins.

About four-to-five years ago the farm was seeing problems with udder oedema pre-calving, as well as complicated milk fevers, which were leading to displaced abomasums.

Mineral analysis of the ration showed the grass silage was the weak link, with higher than ideal potash levels. The farm then decided to make a specific low potash haylage instead. This would provide good structural fibre, as well as the right potash levels.

“We had a field furthest away from the farm that never got enough muck on it. It had soil indices of zero and one (for NPK). I thought it would make sense to get silage off that.”

Cut once a year, this 6ha field produces enough baled haylage to feed the farm’s dry cows for the whole year.

The field only has slurry applied once in the autumn and is grazed by sheep over winter. About 80 units a acre of nitrogen fertiliser is applied in the spring.

“The haylage is cut in late June when the grass is in head and very stemmy. We want a strong, fibrous crop for the dry cows,” explains Mr Higgins. This year the crop has analysed at 1.14% potash.

Dry cows from the all year round calving herd are fed one ration over the six-to-eight week dry period.

Although fresh cow management has also improved over this time, Mr Higgins believes feeding a low potash haylage has helped reduce the incidence of udder oedema, retained cleansings and get left displaced abomasum incidence to less than 2%.

Mr Vecqueray says although cutting a specific crop may require an investment in time, it is well worth it. “It means you’ll spend less time and effort on the soul destroying work hoisting broken cows.”

He stresses the importance of feeding a consistent diet, assessing the quality of forage stocks and planning ahead. “If you’ve got a high potash forage you can then put a strategy in place to cope with it and avoid fiddling with the ration through the season,” he says.