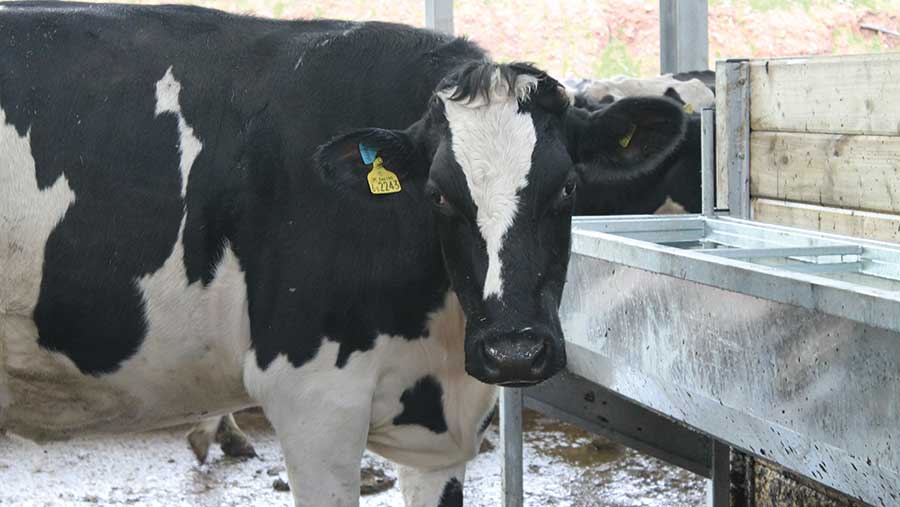 Water intake is a vital part of milk production – a cow has to drink at least three litres of water to produce one litre of milk. And yet identifying whether cows are drinking enough can be tricky.

However, Devon farmer Steve Middleton has discovered a way of ensuring optimum drinking behaviour with a temperature-monitoring bolus.

Initially, he expected that the bolus, which constantly measures body temperature and movement, would help to identify sickness, bulling and imminent calving, but he soon discovered it had other benefits.

Because of its location in the reticulum, the smaXtec bolus can pick up extremely small variations in temperature.

It then transmits this to a base station every 10 minutes, which uploads to a cloud system, sending alerts to the farmer’s computer and phone.

As a cow drinks, the temperature in the reticulum decreases, so if a cow is not drinking regularly enough, the bolus sends a warning to the farmer.

On two occasions it has alerted Mr Middleton to inadequate water intake.

The first alert Mr Middleton received was in March, when the devices flagged up that a smaller heifer was having too few drinking cycles each day.

“On inspection we realised that the drinking trough was too small and situated in the wrong part of the yard, so the heifer was being bullied away from it by older and stronger cows,” he says.

To solve the issue, he moved the trough away from the corner of the yard and increased its size. “The alerts really highlighted the issue of how important it is to have access to water troughs around the yard.”

As the first issue only involved one animal, the effect was quite minimal. However, on the second occasion Mr Middleton found a number of cows were not drinking enough.

“Over the summer I had a new shed put up, in which we were housing the low yielders. I had ordered a new water trough, but it arrived later than expected,” he explains.

The replacement for the trough that was too small © Melanie Jenkins

As a result, there was only one trough in the shed and Mr Middleton was being sent alerts every day flagging up too few drinking cycles from the cows with boluses.

“As soon as the new trough was installed, the alerts stopped,” he adds. “Over the few weeks the alerts were going off I think milk yields had been suppressed by a couple of litres per cow a day.”

Mr Middleton is using the calving, bulling and heat stress alerts from the boluses, but as they are currently only in his spring calvers, he is also using heat detection stickers.

“The bolus alerts and the stickers do tie in with one another, but the stickers have the disadvantage of having to be replaced after one reaction,” he says. “I would like to think that in the long term I will get boluses in all of the herd so I can jump on health problems quicker and avoid losing any yield.”

The importance of water

According to AHDB Dairy, lactating cows need at least 60 litres of water a day, with some high-yielding cattle needing up to 100 litres.

Trough location and size is critical. There should be enough space for at least 10% of the herd to drink at any one time, based on about 70cm of space a cow.

Ensure rapid water flow for refilling, and clean troughs regularly as cows will not drink tainted or dirty water.