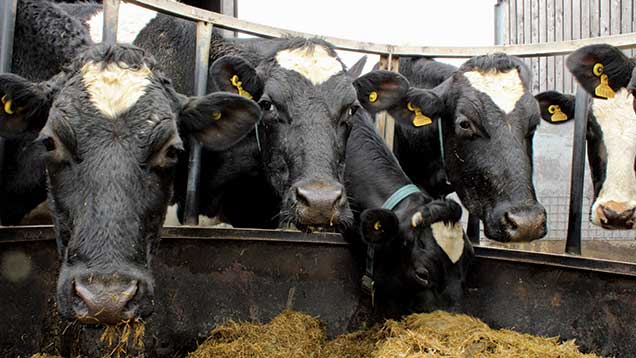 Consistency in routine has become one of the primary focuses for the team at Newlands Farm after rumen bolus data showed small deviations from the norm had significant effects on cow performance, even when cows showed no symptoms.

With the 200-cow herd receiving a simple diet of grass silage and/or grazed grass and concentrates, rumen acidosis had always been high on the list of potential risks.

Although acidosis had never been a problem, when their nutritionist Tom Mann of Three Counties Feeds first approached Sarah Haworth and David Luxton about getting involved in a rumen bolus trial, acidosis was one area they were keen to monitor. Overall, 12 farms in  south-west England took part.

However, regular rumen pH monitoring using the farmBolus from eCow showed small changes in feeding routine were having a greater effect on rumen health and yields.

Subsequent tweaks to routine both during housing and at grass, have resulted in significant yield increases.

The bolus automatically records rumen pH and temperature over a five-month period and is generally targeted at fresh calved cows as these are the animals under highest pressure.

The bolus is inserted into the rumen after calving and data can then be manually downloaded using a hand held device.

• farmBolus automatically records rumen pH and temperature every minute and averages every 15 minutes
• Put in one in every 25 or 30 early lactation cows
• Data can be manually downloaded using a hand held device then viewed on a PC
• Boluses last five months
• Can be used to monitor acidosis risk or effect of routine on rumen health
• Important to match bolus data with farm records to see why changes occurred
• Boluses cost £450 each and the reader £700.

The pedigree Holstein herd at Newlands Farm, Youlstone, Bude, calve all year round and yield 8,500 litres a cow a year. Cows are grazed for about five months from the end of April.

In May last year, boluses were put in four fresh calved cows. Data was then downloaded every two weeks by Mr Mann and used as a marker for patterns in herd health.

Jeremy Hamilton from Three Counties Feeds, who was involved in data analysis for the trial, says although you will always get a natural rise and fall in pH corresponding to feeding, the key is getting consistency in these patterns.

“Cows are creatures of habit so you want each day to be alike. They have natural rumen balancing mechanisms, but these need consistency to work.

“An irregular routine will mean they struggle to regulate feed intake and pH, meaning health and production will suffer.”

Monitoring and analysing rumen pH patterns have initiated significant changes to the winter routine worth an extra litre a cow a day.

Rumen pH was shown to dip at weekends – but still be within a healthy range – because of increased intakes.

“At the weekend I used to get up earlier and do the scraping and feeding routine a lot quicker. That meant cows were being held in the cubicles after milking for less time, so they had longer access to feed,” explains Mr Luxton.

“We’ve now changed the weekly routine so it’s the same as the weekend. That means cows have got an extra hour feeding rather than lying. By making a small tweak to routine and without spending any money, we’re getting one litre a cow a day more.”

The routine change also means cows have better access to out of parlour feeders which also helps maintain yields.

Mr Hamilton says getting order and consistency in routine can be a challenge on some dairy farms with so many jobs to do.

“The bolus data shows stable rumen pH is often as much about prioritising routine and timing of feeding, as what you are feeding. Feed access and cow comfort are also important, as these determine how a cow times her feeding behaviour.”

“When rumen pH rises (more alkaline) you know cows aren’t eating and if they eat less, they produce less milk. Cows were at grass when we first started using the boluses at Newlands Farm and one of the first things we noticed was a rise in pH in certain fields, on certain days.”

This corresponded to a period of rain and cows going onto poorer pasture. This meant they didn’t eat as much and in one example the milk tank was down 2.5 litres a cow a day.

“Although this observation was nothing new, the bolus data focused attention on areas of farm management that were limiting intakes – areas we might not have noticed before,” comments Mr Hamilton.

Mr Luxton says as a result of the bolus data pasture management will be addressed. “We always knew cows grazed some fields better than others, but looking at rumen pH data we were struck by just how much less cows ate in certain fields.

“We’ve done some soil samples off the back of this and will re-seed more proactively.”

Miss Haworth explains how keeping a good diary to link up rumen pH data to what’s happening on farm on a particular day is crucial to success.

“I do a daily diary and note down any significant events, as well as the weather or field changes. We can then interpret the pH data effectively.”

Deviation from normal pH rise and fall patterns also highlighted the effects of days when cows were prevented from going straight out to paddocks after milking, explains Mr Hamilton.

“We’d usually expect two drops in rumen pH after milking each day when cows are at grass. This corresponds to concentrate intakes in the parlour, followed by grass intakes. On some days we didn’t see this drop, so we asked why.”

Miss Haworth explains that as part of normal routine, cows were allowed to walk straight out to grass after they’d been milked. However, on some fields, the logistics of moving them meant they had to be held back until the end of milking.

“Cows would usually go straight into a field and start eating. However, because they were being held back for up to two hours, as soon as they went out to the field they laid down and didn’t graze. That was costing us about one litre a cow that day.”

Now, the high yielding cows are prioritised so waiting times are minimised and intakes maintained.

“The boluses have enabled us to make more money from milk just by changing routine and doing what we do better,” says Mr Luxton.

Three Counties Feeds are continuing to use the farmBolus as a nutritional tool on a number of farms in the South West.