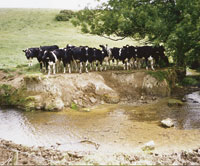 Having a closed herd may lull many into a false sense of security when its comes to disease control, but a Kent dairy producer has proved regular six-monthly testing, even in a perceived “low risk” system, is essential for controlling leptospirosis.

When it comes to leptospirosis, there are so many risk factors that could result in the herd becoming infected. Being closed does not always guarantee security, says vet Alex Walters, Westpoint Vet Group.

“Leptospirosis can be spread in the urine. As a result, the disease can be spread via run-off into watercourses, so stock grazed near streams could be at risk.” There is also evidence to suggest sheep have a part to play in spreading the disease.

And any of these factors could have caused the disease to outbreak at Field Farm, Ashford, where Miles Alexander farms 115 Holsteins – it was only through regular bulk milk sampling the problem was picked up early and control strategies put in place.

“We have always undertaken regular bulk milk sampling for leptospirosis, BVD and IBR, and had no serious indication of disease until routine testing in late 2008 coincided with a period of poor fertility and significant milk drop, and active leptospirosis infection was identified.”

And in a herd where the main aim is to produce a tight autumn calving block and yields of 10,500 litres a cow a year, this was not acceptable.

“We have always had good fertility rates, but suddenly our conception rates to first service dropped to less than 35% and sporadic milk drop was experienced in a number of cows.”

And because the herd is closed, with only some bulls bought in under strict testing and biosecurity measures, this came as a surprise to Mr Alexander. “In hindsight, I regret not testing one of the bulls we bought in a few years ago, as this potentially could have been a source of infection.”

After the disease was identified, heifers were vaccinated immediately with Leptavoid-H – the only vaccine licensed to protect cattle against the two strains of the disease threatening stock in the UK – to ensure they were protected before service, says Mr Walters.

“Unfortunately, most of the breeding season had already finished for the main herd, so despite vaccinating these animals in January 2009 fertility had already been hit hard.”

Since vaccinating, conception rates have improved significantly to about 42% to first service, but it will take us some time to get back up to previous standards, says Mr Alexander.

But the consequences of the disease could have been even worse if the disease had not been picked up as quickly. As a result, both Mr Alexander and Mr Walters strongly urge farmers to bulk milk test to ascertain disease status.

Initial figures from 91 dairy herds tested under Intervet/Schering-Plough’sDairyCheck scheme in 2010 have highlighted the ongoing importance of knowing the disease status of your herd.

The company’s Alasdair King gives us a run down of the figures and what they all mean.

*65% of herds had been exposed to Leptospirosis

“Because leptospirosis is more of an environmental disease compared to BVD and IBR, which are spread through animal contact, it is essential to limit risk of infection through a vaccination programme.”

“This is likely to be an underestimate of the level of disease in unvaccinated herds, and further emphasises the fact BVD is endemic in the national herd.”

“This figure is surprisingly high considering most believe PIs die before one year of age and never enter the main herd. It demonstrates how important it is to monitor and control disease in adults and prevent calves from becoming infected.”

*67% of herds were infected with IBR

“This is the highest incidence of any of the three main diseases. This may be because IBR is commonly overlooked; often the disease can circulate within a herd without any clinical signs, meaning farmers are unsure of how to deal with it.

For more information about the National Infectious Disease Check and to find out how farmers are tackling these key diseases, visit www.fwi.co.uk/diseasecheck