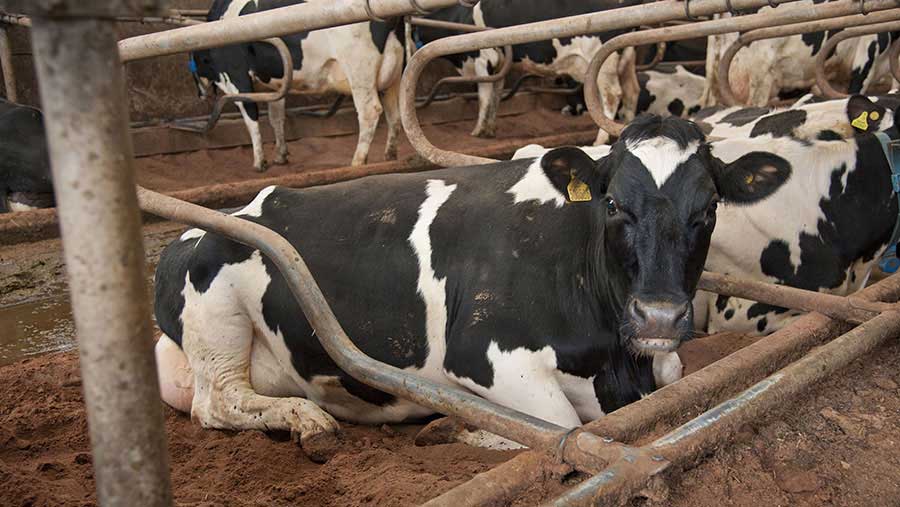 Dairy farmers will be exploring every way to reduce their costs of production this winter.

Bedding can be a considerable overhead, and there is often a temptation to reduce expenditure on dry cows in particular.

However, there are a number of hidden costs to using the wrong bedding, from cow health to machinery wear and labour.

So what are the most cost effective alternatives?

“Ultimately, dry cow bedding choice will be driven by its availability, cost, type of housing system (cubicle or loose yard) and how it will be handled by the existing slurry system,” says Jenny Gibbons, research and development manager at AHDB Dairy.

“While some materials have significant advantages over others, bedding routines are equally as important as the choice of material.”

On average, bedding accounts for 2% of total costs of production on a pence a litre basis.

“It is well worth investing in good-quality bedding. In the long run scrimping on bedding type and quantity will be twice as expensive in terms of the problems it could cause.”

“Once the cow starts to bag up it becomes more difficult for her to lie down so it is important to have a soft, well-cushioned lying area with sufficient grip.”

Hygiene is also critical at this time when the cow’s immunity is depressed. “Cows close to calving require clean and dry bedding to minimise the risks of mastitis and metritis, as well as potential disease transfer to the calf.”

See also: How to reduce your bedding costs this winter

Dry cows are the heaviest, widest cows on the farm and require more spacious lying areas than others. Cubicles for mature Holsteins should be at least 120cm wide, preferably 130-140cm.

Best practice guidelines At least 250kg of straw a cow should be used each month in housed systems.

Straw-bedded cubicles would normally be raked and conditioned at each milking, with fresh bedding applied twice a week.

Pros Straw is the most widely used dry cow bedding as it is comfortable, easy to source and compatible with most slurry systems.

“When clean, dry, and well stored under cover it can provide a decent bedding,” says Dr Gibbons.

Cons “If straw becomes soiled, particularly in deep-bedded yards, it can be the perfect medium for growing the bacteria responsible for mastitis,” she adds.

Straw yards can also be labour intensive, requiring daily top-ups and cleaning out every three to four weeks.

“Straw is expensive and farmers may be tempted to economise by using less of it, but that can increase the number of dry cow mastitis cases, resulting in cows calving down with either clinical infections or raised cell counts.”

Best practice guidelines Providing it is well managed and maintained, sand bedding can be left for up to six months, offering cushion, traction, and support at the time when the cow needs it most.

Cons “However, transport costs and the ability of the farm’s slurry system to handle sand will dictate whether it’s a suitable and economical bedding to use,” says Dr Gibbons.

Best practice guidelines Dr Gibbons advises farmers to steer away from shredded paper. “Shredded paper is not widely used on farms as it is not particularly absorbent, and cattle can appear dirty.”

Pros A variety of paper-based products are available, which can offer a disinfectant effect, helping to reduce bacterial growth.

Cons However, these products can be expensive. Paper pulp can also set hard, producing an undesirable uneven surface, and when wet it can heat up to provide good conditions for bugs to flourish.

It is only permitted in England and Scotland, and cannot be used for deep bedding in loose yards, says Dr Gibbons.

strong>ProsEnvironmentally friendly and compatible with all slurry systems, RMS can be used in cubicles, either as a layer on top of mattresses, or as a cubicle bed up to 15cm in depth.

Cons It should not be used in calving areas, due to the susceptibility of newborn calves to disease. It may also be a risky investment as it could be banned in 2016 if current research deems it unfit.

Best practice guidelines It is important to obtain clean, dry and consistent products, although the best kiln-dried material can be expensive, says Peter Shipton, senior technical manager at Kingshay.

Pros Easy to use and store, and compatible with most slurry systems.

Cons “Moisture content of fresh sawdust prior to use can range from 55% to 81%, leading to increased bacterial counts,” says Dr Shipton.

When it comes to cow hygiene it’s the management of bedding, both before and during use, that is more important than the choice of material in itself, says Dr Shipton.

Research by Kingshay in 2011 showed that bacterial burdens varied widely from one farm to another regardless of the bedding type, mainly due to different cubicle and building design, ventilation, and frequency of scraping and cubicle cleaning.

“Incorrect cubicle design can lead to milk, faeces and urine collecting towards the back of the cubicle contaminating bedding,” says Dr Shipton.

A 2011 Kingshay survey found straw in cubicles produced the highest bactoscan levels, averaging 27, with shavings the lowest at 16.

However, cell counts were highest for shavings, at 195, with paper the lowest at 149 (see table).

“However, much of the range in bacterial counts between farms which is related to management – so good management is more important than bedding type from a hygiene perspective.”

Ian Pye has tried various different bedding systems for his dry and calving cows, and feels he has now reached the best option for his farm.

So about five years ago he switched to sand. “There was an immediate difference in mastitis rates,” he says.

“But then we started hitting other problems – the calves were hitting the sand wet, and they weren’t suckling because the cows’ udders were sandy. We’d leave the calves on the cows for 24 hours and they just weren’t getting the colostrum they needed.”

Mr Pye has now returned to loose-straw bedding, but has adjusted his management to maximise hygiene.

“Previously we were removing the afterbirth and topping up with clean straw,” he says.

“With the sand we did the same, and just raked it over – but the level of cleanliness was subjective. Now we are all-in, all-out; after each calving we clean out all the straw and straw afresh, and post-calving mastitis rates have dropped by 80-90%. We just don’t have a problem now.”

However, he has kept the hospital pen on sand, as it is clean, provides good grip, and is the most sterile environment for potential surgical procedures.

Far off dry cows are kept at grass, with milking cows on sawdust and lime-topped mattresses. “It suits our slurry system, but it would be too expensive to use for dy cows.”

In the next year or so Mr Pye plans to build a new dry cow shed, with four straw calving pens and a rubber-matted hospital pen.

Financially, the straw is more expensive to use.

Although both sand and straw were costing Mr Pye about £50/t, he was using 2-3t of sand against 4-5t of straw a year.

“We were saving £100 in bedding and more in labour, but the bigger picture is that the calves were less healthy, and our mastitis rates are now really low. Hygiene is more about your management than the bedding.”

Andrew Brewer milks 650 crossbred cows at Ennis Barton, Fraddon, Cornwall, and last year changed from outwintering dry cows to loose housing them on Envirobed – a processed paper-based bedding. “We spread it 6-8in deep and stocked it at about 7.1sq m/cow,” he says. “We cultivated it every day with a spring tine, topped it up twice over the winter and only cleaned it out after spring turnout. The cows were very clean and the high pH kept the bacteria down.”

The composted paper is high in calcium, so acts as a decent soil conditioner – the only drawback is that it’s a bit dusty when being moved, adds Mr Brewer.

“The cows really like it though, and mastitis hasn’t been a problem.”

Although some cows will calve onto the Envirobed, he actually uses straw for his calving boxes. “The calves stay cleaner when they’re born onto straw, but you have to use a lot more so it’s more expensive in the end.”