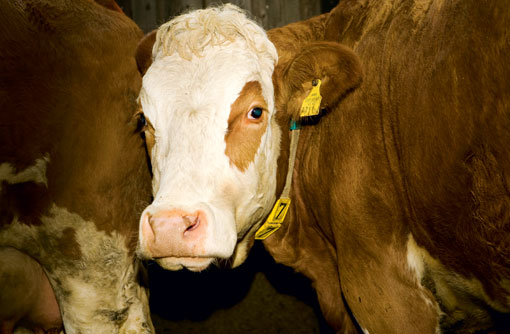 Breeding a cow to suit individual management systems has seen a surge in new dairy “buzz” breeds in the UK. Jeremy Hunt reports.

They have been around for quite some time, but the red and white dairy breeds from France, Switzerland and Scandinavia are enjoying a surge of interest from UK milk producers keen to acquire traits such as strength, wearability and better fertility – as well as putting plenty of high-quality milk into the tank.

Montbeliarde, Fleckvieh, Normande and Norwegian Red – as well as the new Viking Reds (a mixture of Swedish Red, Danish Red and Finnish Ayrshire) – are the targets of milk producers embarking upon a crossbreeding programme that doesn’t involved traditional British dairy breeds.

Geno UK, a company based in north Wales, has been set up to meet the growing UK demand for imported dairy genetics for use in crossbreeding.

Wes Bluhm, of Geno UK, believes there’s a deepening frustration among UK milk producers with the shortcomings of the mainstream dairy breeds. “Farmers tell us they are no longer relevant to their system and want to breed a type of cow that matches their management and nutrition – whether it’s a high- or low-input system,” he says.

But he urges farmers embarking upon crossbreeding to have a “plan and a structured approach” to ensure they exploit the full benefits of the range of imported genetics on offer – and that often involves a three-way crossing programme involving different breeds, each bringing its own specific traits.

“When used for crossbreeding, the genetics available across all the breeds we’re involved in marketing in the UK won’t lead to a loss of milk production when the resulting heifers are brought into the herd.

“Production is highly heritable and these breeds have made rapid strides in recent years. Their genetics enable production levels to be maintained, while still passing on traits for strength, constitution, health and fertility.

“Dairyness, in terms of a cow being angular, sharp and looking like three triangles, doesn’t automatically mean more milk. The crossbreds match the yields of their dams but are stronger, healthier and can hold their flesh – and that has a big impact on improved fertility.

Mr Bluhm believes we are all brain-washed into thinking that the more dairy-like a cow looks, the more milk she will give. “But commercial dairy farmers who are now milking crossbred cattle are proving exactly what the US trial work had convincingly shown us – that milk yield from the crossbred generation was similar to that of their pure Holstein herd contemporaries,” says Mr Bluhm.

The Montbeliarde is certainly one of the higher-profile breeds enjoying all this attention. When these powerful red and white cows arrived in the UK about 20 years ago there was a strong marketing campaign to kick-start interest, but it’s the more recent changes in attitudes towards milk production – and the type of cows best suited to doing the job most efficiently – that have been a real shot in the arm for this strong but milky French breed.

But as with all these red and white cattle, the biggest issue among milk producers has always been the risk of sacrificing production in the quest for harder-wearing cows of a stronger constitution.

West Cumbria milk producer Michael Wilson – who has a herd average of 8,200 litres – says it’s “total farm profit” that sums up the benefits he’s achieved by using Montbeliarde genetics in his own herd.

“It’s not just about how much milk is produced. Our pure-bred Montbeliarde cows are matching the remaining Holsteins to within 100 litres. Our British Blue cross Montbeliarde calves are making up to £400, cows have a high cull value and we have good fertility and longevity. Break that down into extra pence a litre of the milk we produce and it’s a significant amount,” says Mr Wilson, who is milking 110 pure-bred Montbeliarde alongside 115 Holsteins.

He’s just returned from a visit to herds in France and says the genomics now being applied within the breed is bringing through a new generation of sires to suit all types of milk production – either grass-based or higher-input systems.

Another breed fast attracting interest in the UK is the Normande – the third most popular dairy cow in France after the Holstein and the Montbeliarde. John Findlay, of Culgaith, Penrith, in Cumbria, has been involved in the breed for 15 years and now has 120 pure-bred Normande cows.

“A cow you can do anything with – that’s the Normande. We run a simple system of self-feed silage and cake in the parlour and have a herd average of 6,000 litres. But we’ve cows lasting up to 10 years and have just sold a cull at £1,300,” says Mr Findlay, who is on a compositional contract with First Milk earning 29p a litre and describes his Simmental cross Normande bulling heifers as selling “like hot cakes” to local suckler producers.

It’s surprising that the Fleckvieh – the second most numerically large dairy breed in the world – has taken so long to attract interest from UK dairy farmers looking for alternative milking breeds. Derived from the Simmental – it’s often referred to as the “milking Simmental” – the traits of the Fleckvieh are finally being recognised for their ability to bring strength and vigour to a crossbreeding programme.

Better fertility, stronger constitution, less mastitis, higher milk solids and no reduction in yield – that’s how dairy farmer Keith Birkett and his son Mark, of White Lund, near Morecambe in Lancashire, sum up the benefits of using Swedish Red and Montbeliarde genetics in a crossbreeding programme across their 250-cow Holstein herd.

“Six years ago we started using Swedish Red semen on our Holsteins and have continued by using Montbeliarde on the resulting heifers. We’re coming back on that generation with Holstein, but we’ve also recently used some Normande semen on the first crossbreds,” says Keith Birkett.

The Birketts – whose low-input system uses less than one tonne of cake a cow and produces a herd average of 7,500 litres – say they wanted to improve the strength and wearability of their dairy cows and believe the three-way cross would the best way to achieve the improvements needed. The herd’s butterfat average is 4.4% and protein 3.4%

“All these red and white breeds have their own individual traits and we’re trying to get the best from each of them. The Swedish Red is well-known for its fertility and health, and you can come back on the first-cross heifers with either of the ‘mountain’ breeds such as the Montbeliarde or Normande to give you strength and good constitution,” says Keith.

The herd is gradually moving away from pure-bred Holsteins – there are currently 80 left – and is now milking around 170 of the Swedish Red cross Holsteins. The first of the three-way-cross heifers have yet to calve.

“The Montbeliarde-sired heifers out of the Swedish Red cross Holsteins look very impressive. They are still very dairy-like, but have the extra strength we wanted and certainly more size than the first-cross.”

Keith and Mark agree that as well as producing stronger conformation traits, the crossbreeding has brought about a big improvement in the herd’s fertility.

“That’s really been the big one. Instead of having 50% of cows holding to first service, we’re now consistently getting 70-80%. And we get very little mastitis since we started milking the crossbreds, something that must have a lot to do with the importance placed on health traits among Swedish Red breeders in Sweden,” says Keith.

This spring, some of the crossbred cows are calving for the third time – and the way they look has convinced the Birketts that they made the right decision. “We’ve maintained the herd average since starting to switch to the crossbreds. The udders and legs and feet are exceptionally good – even in the third calvers.”

Some bull calves have been retained and finished and some sold. “They make tremendous dairy-bred bullocks and have more shape than a pure-bred black and white. In the markets, some red and white crossbred bullocks have been making up to £1,100 at 28 months old.”

Mark, who is a contributor to the web blog www.dairyxbred.com involving breeders in the USA, UK and New Zealand, says there is growing worldwide interest in the benefits that crossbred cows can bring to commercial milk production.

“As more dairy farmers do it and show what can be achieved, more will be encouraged to try it. With breeds such as the Normande and Fleckvieh now offering some really good bulls, it’s giving us more genetics to evaluate in the crossing programme.”