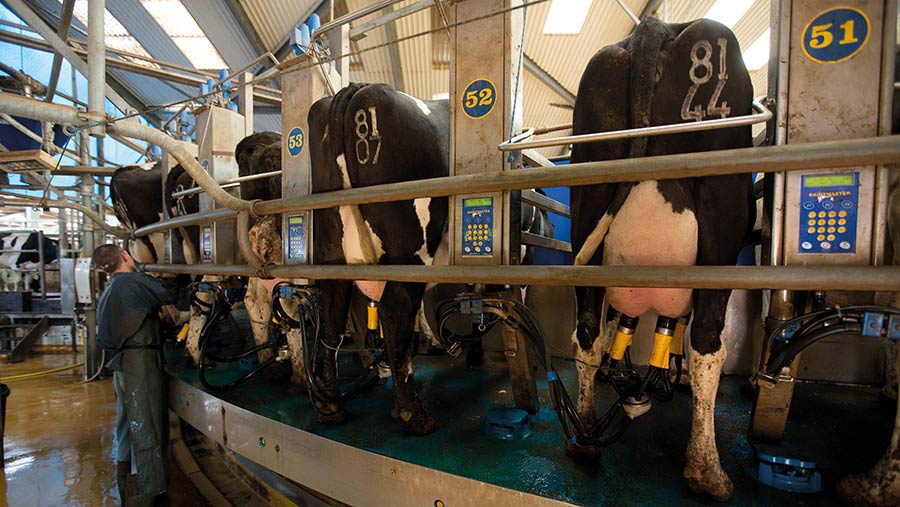 The UK dairy sector has endured huge milk price volatility but has continued to innovate and improve efficiencies.

Step onto any UK dairy farm in 1991 and it is very likely that it would have been calving its herd throughout the year, grazing cows in the summer, and housing for six months.

Fast forward 30 years and there is no typical herd management system; many different systems – including block calving and year-round housing – now distinguish one dairy farm from another.

This evolution of systems matches farms to local conditions and different milk contract requirements, while herd size and cow breed has been driven in part by pressure on dairy farms to become more efficient to offset a milk price that has failed to keep pace with input costs.

Economics have also driven milk producers to expand – in 1991 the average milking herd had 75 cows; now it is closer to 148.

See also: Milk quality issues: Causes and how to reduce the risk

As businesses have become more productive, so, too, have cow breeds.

The Holstein-Friesian has endured as the most common UK cow breed but that animal is very different from the one that populated dairy farms three decades ago.

“With all the data now available on fertility, cell counts, mastitis and other traits, farmers can target the type of cow they want for their system,” he says.

For grass-based systems, the emergence of the cross-bred allowed a transition to extensive grazing.

The introduction of UK genomic evaluations in 2012 marked another step forward in herd efficiency, and more dairy farmers now use genomics to achieve faster genetic progress.

For more than 30 years, the dairy sector operated within the framework of EU milk quotas, but they expired in April 2015.

A devastating milk price crash followed, when high domestic production combined with a ban on dairy imports by Russia and falling returns from global commodity markets.

Consequently, many UK milk processors reduced payments to farmers for milk, some to as low as 15p/litre. Some businesses have yet to recover financially, says Mr Dodd.

“It was a huge financial hit for dairy farmers. I still see the hangover in farm accounts from 12 to 18 months of very poor milk prices.”

Some left the industry but those who remained or joined as new entrants have increased production within the UK, producing 15.3bn litres of milk in 2020, the highest annual figure since 1990.

As with all farming sectors, milk production has benefited from the advent of new technology.

Collars and pedometers that detect heat and rumination are now commonplace, and robot milking is no longer a novelty.