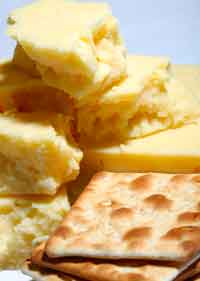 An attempt to launch a piece of farmhouse cheddar into space has ended in failure and a plea from the organisers to help them track down their lost cheese.

West Country Farmhouse Cheesemakers group had hoped to be the first to send a piece of cheese into space.

Their ill-fated attempt began at 4am on Tuesday 28 July when a 300g wedge of cheddar was loaded into a capsule suspended beneath a weather balloon.

The aim was to send the cheese 18.5 miles into the upper atmosphere where the balloon would explode and the cheese would float back to earth under a parachute.

But the GPS tracking system broke and now the cheesemakers have said the cheddar could be anywhere along a 200-mile corridor in southern England.

Cheesemaker Dom Lane told BBC Wiltshire: “We’ve been tracking the trajectory and the current prediction is that it could land anywhere from Wiltshire to Hemel Hempstead [Hertfordshire].”

The launch was made to mark the 40th anniversary of NASA‘s lunar landings.