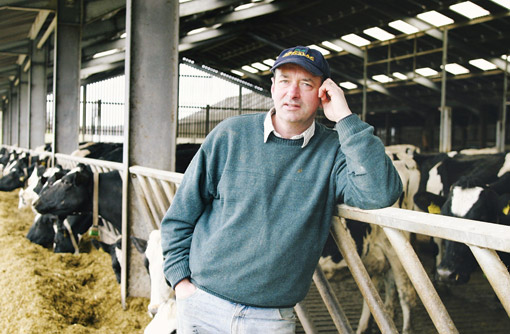 Buying groups often enable farmers to negotiate the best deal on feeds, but the concept could be stretched beyond the feed trough, as Debbie James reports.

A group of dairy farmers who share the same herd-breeding objectives are reaping the economic benefits of collaborative buying power.

The farmers, who are spread across the UK but have similar milk-production systems, purchase all their bull semen through their own buying group.

The group, known as KTR, has an annual semen requirement for 6,000 cows, so the order is an attractive one for any potential supplier.

One of the group’s founder members is Sussex dairy and arable farmer Tim Gue. Ironically, it was an overseas visit to the USA hosted by an AI company that brought the five core members together 12 years ago.

“We soon realised our businesses had a lot in common, so we agreed when we arrived back in the UK we would visit each other’s farms,” Mr Gue recalls.

“It was during those visits we discovered we were all using pretty much the same semen; we had the same breeding goals; the same sort of cows and systems; so we thought we could making savings by ordering jointly.”

The core members meet once a year, in May or June, to discuss the bulls on offer. Each is responsible for an AI company and at that meeting a shortlist is drawn up, the members discuss the group’s requirements with their AI companies and request prices.

In addition to the five core members, there are a further six associated members who place their orders through the group. “They are happy for us to buy the bulls. It is a win-win situation because it is more volume for the group and they trust us to come up with the right breeding selection. There is a bit of variety on the list but our requirements are still very much the same,” Mr Gue explains.

With most breeding companies having similar types of bulls available, price is usually the deciding factor.

“There are a lot of bulls out there and a lot are pretty similar. When this happens we don’t mind who we get the bulls from, it purely comes down to price,” says Mr Gue.

“We are not going to put the squeeze on, it is up to the AI companies to come up with the best price. They know what is at stake in terms of volume. If they come up with the right price, they will get a sizeable order.”

The group shares a good relationship with the AI companies it deals with because they value each other.

Semen is bought from two, sometimes three, companies every year. The discount is sizeable, but the price agreed remains completely confidential. “The deal is we don’t tell anyone else what the price is and we pay right on the due date. This gives us a decent discount,” Mr Gue says.

The farms in the group are all large enterprises and have similar systems with similar staffing. Mr Gue’s 400-cow herd produces an annual herd average of 10,500 litres. All the farms carry out their own artificial insemination.

Another member of the group is Tom King, who buys 1,000 straws of semen a year. His herd of 400 pedigree Holsteins is milked three times a day, yielding an average of 12,000 litres a year.

Mr King, who farms near Dorchester, Dorset, has seen big benefits in the collaborative approach to semen buying. “If you can approach a company with a big order, then it is inevitable you will get a bigger discount than you would if you were buying individually,” he says.

He believes it is essential for a buying group to have similar breeding objectives – he doesn’t believe the concept would work if there were a mix of systems.

“It helps us when we are considering the list of bulls we are buying, we are all trying to achieve the same things. You have to have the same aims and ideas,” says Mr King.

He aims to produce a high production, ‘no hassle’ cow with a focus on health traits while maintaining production. The rest of the group generally shares this list of requirements.

Mr King believes collaboration has benefits beyond the obvious money-saving aspect. “If you have five people sitting down to discuss breeding, it does help your own business, it helps with the other decisions we make here on the farm.”

There is some additional administration over and above that needed when purchasing individually, but the benefits far outweigh any negatives, he adds. “We have to round up the semen orders, to make sure that everything is sorted, and that takes time, but for the benefits it brings it really is a no-brainer.”

Some members of the group have large enough herds to attract their own discounts, but choose to be part of the group for all the other benefits it brings.

“There are very big players in the group who could get very good prices if they placed their own orders, but appreciate all the other advantages of being in a group of like-minded farmers,” says Mr Gue.

One of those advantages is listening to the opinions of others and questioning personal decisions based on those views.

“When we meet up it is an opportunity to hone our decisions. For instance, if I were swayed by a glossy ad for a particular bull even though if it didn’t fit our criteria, the others would shout me down. It keeps you in line and encourages you to make decisions based on true science and facts, not marketing hype.”

Trust is very important to the success of the collaboration. And there is a very clear rule regarding any disagreements. “There is one rule in the group and it is that if any one of us had a disagreement with another member, that disagreement has to be able to be resolved in the bar over a pint. Everything is largely done on trust so we have to be able to get on and trust each other,” says Mr Gue.

Although the concept works well for purchasing semen, he would be against extending it to the purchasing of other farm inputs.

“As an individual business we are very co-operative minded, we sell our grain through Open Field and purchase a lot of our inputs through a co-operative and that would be true of several of the other farmers in the group also.

“I don’t see what we would gain from buying, for example, electricity as a group because we couldn’t do it as well as the established organisations already out there.”