A contract farming agreement has given Kim Petty the freedom to concentrate on his agricultural supply business while remaining an active farmer.

Mr Petty farms Tyddyn-yr-Eglwys, near Llanfyrnach, a 263ha, spring grazing dairy in Pembrokeshire, but faced a dilemma when Kiwikit grew from a small business operating alongside his dairy farming enterprise to one employing 14 people.

His daughter, Bryony, had insufficient knowledge to take on the farm but neither of them wanted to stop farming. Their solution was to form a contract farming agreement.

“We didn’t want to get out of dairy farming because we have a very good farm business and enjoy it,’’ Mr Petty explains.

“Contract farming allows us to continue to be a viable business that will deliver for us going forward and reward others who are involved. If someone has a vested interest in the business they are more likely to run it at its optimum.’’ 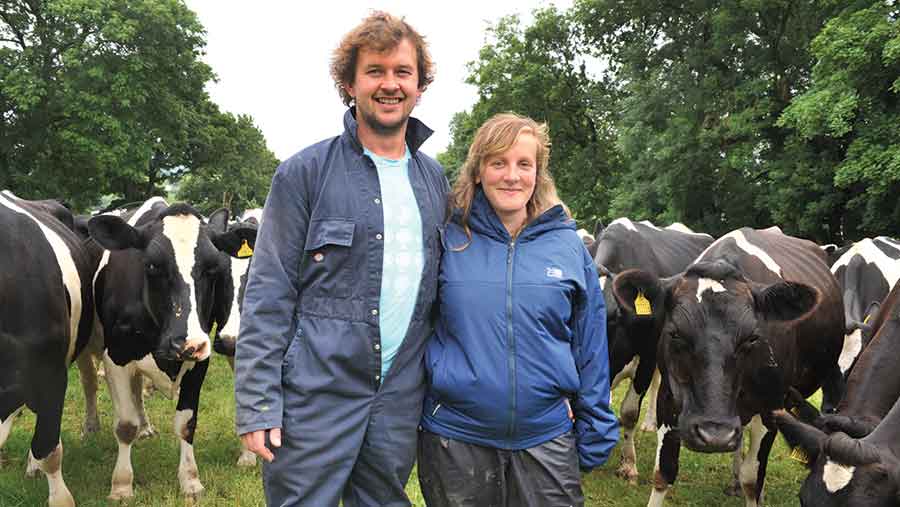 The opportunity was advertised and six young couples applied, each with a business plan. The successful applicants were Dylan Harries and Hannah Grieves.

“Dylan and Hannah were the best contenders; I have no regrets about selecting them,’’ says Mr Petty. “Before we finalised the agreement we ran the farm together for a year to ensure both parties were happy. We got on well.’’

Under the terms of the agreement, 27-year-old Dylan and Hannah, aged 26, provide the machinery and staff and all the costs associated with those. They employ one full-time and two part-time workers.

“It gives them a stake in the business but we each retain our individual identity as farm businesses in our own right,’’ adds Mr Petty.

“They bill me for their services. I receive an initial payment for providing land and we each receive a return on capital for money invested. If there is a certain level of surplus they get the majority share. If the business is farmed efficiently and economically it is to the benefit of both parties.

“This structure means that in the poorer years like we are experiencing now everybody gets something out of it. I get a steady income, but in the really good years the contractor gets the most income.’’

It was while working in New Zealand that Mr Harries saw first hand the benefits of contract farming. He had grown up on a smallholding but with no real background in farming he knew that the odds were stacked against him farming in his own right.

After leaving school at 16, he worked on dairy farms and spent a year in New Zealand where he worked on seven different farms ranging in size from 120 cows to 1,800.

“This is where I got the appetite to progress. You see other people doing it and doing it successfully and it gives you that ‘can do’ attitude,’’ he recalls.

The couple had sufficient savings from the years they had worked together and they didn’t need a loan to cover the machinery and labour costs – their working capital.

“If we had borrowed money and the farm didn’t deliver a return, we would have been unable to pay back any debt. We were fortunate to be in a position where we had money to put into the business but if in the future we need to borrow we probably will,’’ says Mr Harries. 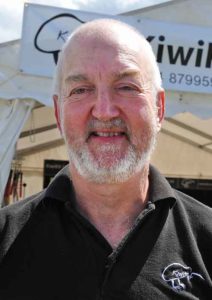 Without savings, it would have been a barrier because when they sought finance from a bank they were quoted a 12% interest charge.

“We had no equity and no track record and as such the bank was not at all supportive. They wanted 12% interest on a business that is only guaranteed to deliver a 10% return,’’ says Mr Harries, who adds.

The contract farming agreement is for five years but there are mechanisms in place if it isn’t successful.

For instance, if the couple don’t hit their financial goals for two consecutive years, the agreement can be ended.

Also, if Mr Petty decides to sell the farm before the five-year agreement period, the contract states he would have to pay Mr Harries and Miss Grieves a full year’s income in recompense.

Despite the financial challenges of dairy farming in the current climate, Mr Harries is determined that situation won’t arise. “I am my worst critic; I push myself quite hard so I am always going to go that step further to make it work”.

The farm is stocked with 390 cross-bred cows, producing an average annual milk yield of 5,500 litres – or 440kg of milk solids – from 600kg of feed. The business is also rearing a large number of youngstock because the plan is to increase cow numbers to 550.

Mr Harries has set a series of targets. One of these is to produce 5,000 litres from forage. Last year he achieved 4,800 litres, up from 3,600. He is also aiming to reduce the nine-week calving block to seven.

To help achieve this, Mr Petty is investing in a number of infrastructure improvements. The drinking water system and cow tracks have been upgraded and he is building an additional 240 cubicles, a self-feed silage pit large enough for 500 cows and a 1.4m gallon slurry lagoon.

However, the day-to-day running of the farm is the couple’s responsibility, with Mr Petty getting involved at weekends when he returns to the farm from the KiwiKit main office in Ludlow.

Every month all three get together for an informal meeting. The joint venture employs the services of Tony Evans, of Andersons, to provide clarity, focus and fairness.

Mr Petty is an advocate of encouraging young people to farm and this is one of the reasons why he sought a young couple for the contract farming agreement.

However, he said there are other benefits too. “I get a lot of pleasure from seeing young people develop. It would have been hypocritical of me, when I had the opportunity to provide an opportunity, to not follow that through.

“But from the point of view of my own interest and looking forward, this is providing me with a steady income and it is a way of getting a better return than ceasing farming and renting out.’’

It is not without risk though, he adds. “You still carry the worries of running the business; those don’t go away.

“But for me, this option allows me to continue to actively farm and to keep the farm as a long-term investment. It is a good business. It is only this year that it has come under pressure because of the milk price.’’

The business has just switched milk buyer, to the Newcastle Emlyn-based Dairy Partners, and now with the UK milk supply falling sharply, all parties are feeling positive going forward.

Although Mr Harries and Miss Grieves have come into the industry at a testing time, they have no regrets. “Of course it is not the perfect time to start a business and yes, if we had started two or three years earlier we would have built up more equity.

But perhaps the business and budgeting lessons we are learning will be the most important we will ever learn,’’ says Mr Harries.

They hope long-term being part of a large farming business could accelerate their own plans to one day own a farm.

“If we had started off on a small scale, perhaps running 30 cows on 50 acres, there would have been no cash surplus,’’ says Mr Harries. “When you go into a larger business you have instantly got that scale and ability to generate more cash.’’

How they make it work

For both parties, mutual respect is important to making the agreement work. “A willingness to compromise with the farm owner and to learn how they think about things is important,’’ says Mr Harries.

“In our case, I respect the fact that this is Kim’s business, he is the one who has progressed it from where it started to where it is today.’’

Mr Petty agrees the relationship between the people involved is important. “You have to get on well. As the business owner, if you have got someone good and technically proficient, you have got to step back and let them get on with running the farm.”

And a profitable business model is vital. “It has got to deliver for both parties,’’ says Mr Petty. “We have just had the results of our first financial year and there was a divisible surplus. So far it is working well and we are confident that there is a good future ahead for both parties.’’