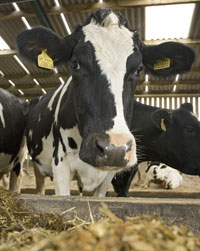 Imagine a feed that can be harvested easily despite the weather, removes the need for several contractors and is easily ensiled. A Wiltshire dairy farmer seems to have the answer.

The stress of being so dependent on the weather when harvesting maize for crimping, and having to rely on more than one contractor, finally became too much for dairy farmer Josh Stratton. He decided to take his agronomist’s advice to grow corn cob maize (CCM) or ground ear maize.

Milking 300 Holsteins at East Farm, Codford, Mr Stratton says the logistics of having to harvest maize on specific days and getting several contractors there on the same day just didn’t work.

“When you are relying on the weather to be dry and then contractors to be free, there is no room for manoeuvre. And after the past few wet summers we’ve had, I’m glad we made the move,” he says.

Mr Stratton, who up until 2005 was growing and feeding crimped maize, has for the past three years grown CCM. “The joy about harvesting CCM is you can do the operation all in one go. The whole cob is stripped from the maize plant by a special header on a normal forager, which then smashes the cob into pieces. It is then ensiled, all in one operation.”

The plant residue and leaves are left on the field and ploughed in. 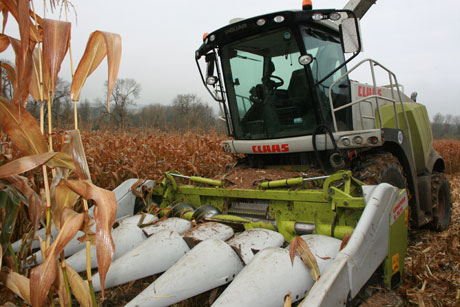 “There is no advantage in feeding CCM, the only benefit is in harvesting. The fact you can hire the harvester with the special adapter plate and cut it when you want, despite the weather, is great.

“This year we harvested on 31 October. We drilled early on 18 April and it’s been the best year yet, despite the poor weather,” says Mr Stratton.

And it is not only easier to harvest and ensile, but cheaper to produce, he says.

“Because you don’t have to hire extra machinery like a crimper and because the whole operation is quicker, we are saving considerable money. Instead of taking 10 hours to harvest the 60 acres, we can now do it in six hours.”

Mr Stratton admits that because the stover dilutes the feed value, CCM is not as nutritionally beneficial as feeding the same amount of crimped maize. But ensiling in one operation means there is less spoilage.

“CCM still provides a valuable source of energy for dairy cows while retaining a good level of fibre making it an ideal constituent to the diet throughout the year.

“Feed costs are also reduced because it displaces the need for bought in feed. CCM has a better starch content than wheat meaning that we can feed less soya, rape and sugar beet blends.

“If a producer is looking for a simple and easy operation and for a good value home-grown feed that can be ensiled easily, then CCM is it.”