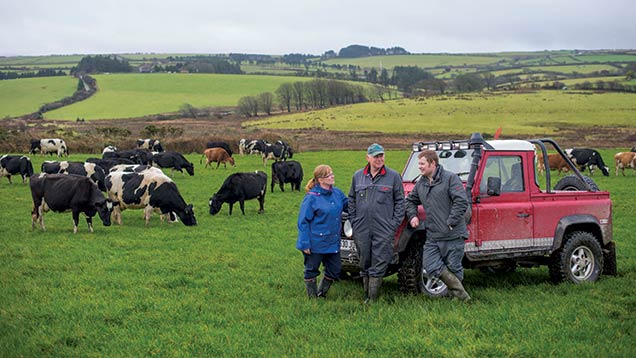 One farming family says switching focus from milk yields a cow to yields a hectare has saved their dairy business.

Four years ago, the dairy enterprise at Trelay Farm, Davidstow, was losing £113/ha. Since then the business transformation has been nothing short of remarkable.

By improving grassland management and grazing infrastructure the farm is now yielding £933/ha.

“Four years ago we were losing money. If we had carried on as we were I don’t think we would still be in dairying,” admits Tom Jones, who farms in partnership with his father Chris and mother Jackie.

Chris and Tom took the decision to stop pushing individual cow yields and move towards a lower-cost grazing system on the advice of independent grassland consultant Gareth Davies.

“Everyone talks about litres a cow, but at the end of the day, if you’re not making a profit it is soul-destroying and you can’t go on like it,” explains Chris.

Previously, cows calved year-round were grazed outside for six months during the spring and summer months, and were buffer-fed clamp silage, wholecrop and barley. But feed costs, which represented almost half of the milk cheque, were eating away at profits.

Instead, the family switched to a spring and autumn calving block and extended the grazing period to eight months by laying cow tracks.

While yields have fallen by 2,000 litres to 6,000 litres a cow, paddock grazing has improved grassland quantity and quality, enabling the herd size to be increased from 140 to 250 cows – so total milk output has actually increased.

Cows are milked twice a day through a 14/28 herringbone parlour, and after each milking they’re moved into a fresh paddock in a mob group of 200.

Despite the fact milk price dropped 5p/litre in the three months to December 2014, Tom says they’re still able to make a margin by producing milk cheaply and making sure it is good quality.

Butterfat and protein are currently 4.8% and 3.76% respectively, and somatic cell counts are 140,000cells/ml, which is equating to bonuses worth 6.8p/litre on top of their average milk price of 28.3p/litre.

The grazing platform of 24ha is split into 1.2ha paddocks. Cows go into paddocks measuring 2,800kg of dry matter (DM) and come out at about 1,600kg DM.

In a year when many farms have experienced low-quality forage, at Trelay the 2014 silage analysed at 11MJ/kg DM of metabolisable energy and 16.2% protein.

Chris puts this down to getting cows out early so that grass was excellent quality at cutting.

Mr Davies says set-up costs such as electric fencing, tracks and troughs can often deter farmers from investing in paddock grazing systems. While these investments are being made gradually at Trelay, it still hasn’t been used as an excuse to prevent them from grazing cows properly, he says.

“Troughs are definitely something we are short of and we’re buying one or two a month and doing it slowly,” says Tom. In the meantime, concrete tanks are moved between paddocks with a telehandler.

“We have got a lot of money invested in fencing stock, but you can’t do this without it. We are going to put permanent fencing stakes on the cow tracks next summer,” he adds.

The farm is fortunate in that it owns its own quarry, so cow tracks have been laid at relatively low cost. However, Chris says all investment in infrastructure has been recouped through the saving they’ve made on feed.

“Now the feed bill is about one-quarter of our milk cheque. That’s the bulk of our savings. Everything we used to buy in we just don’t buy in anymore,” he says.

In the winter, once cows are housed, they receive grass silage and are fed a 22% protein cake in the parlour year-round.

The autumn calvers receive 4kg of cake at each milking and the spring calvers receive 2kg until calving, when everything moves on to a flat rate of 4kg a head for ease of management.

They no longer buffer-feed cows out at grass, either. “You can’t teach cows to eat grass if they have silage in a trough. It makes them lazy,” adds Tom.

Improvements in herd health have also led to significant savings.

In the past three years the herd has only had one displaced abomasum (DA), compared with seven over the same period under the old system, says Tom.

Lameness has also improved, despite the fact cows have to walk a three-mile round-trip to the furthest field.

“I have a foot-trimmer in once a month. We find we have more problems with overgrown feet than lameness,” explains Tom.

“I can afford to have a foot-trimmer more often now, so that probably helps,” he adds.

“One of the first things I notice [when people move to grazing more extensively] is their vet bills seem to reduce significantly. But I have never been able to put my finger on what it is,” admits Mr Davies.

Tom believes the improvement has been born out of not pushing cows as hard.

“Since production a cow has dropped, cow fertility has improved. Anything that wasn’t in calf was a problem cow or an older cow,” he explains.

The herd is AI’d to Holstein-cross-Friesian bulls over a six-week breeding period, starting with the spring calvers on 1 May, followed by the autumn calvers on 1 October. On average, cows receive 1.5 straws a head and anything that has failed to conceive is run with a Holstein-cross-Friesian sweeper bull. Meanwhile, all heifers are mated naturally at 15 months of age to calve down at two years.

Tom says the beauty of having two blocks is that any cows falling outside the spring window can be moved in the autumn calving herd to give them one more chance of getting in calf.

The spring herd starts calving in February and is kept on deep, sand-bedded cubicles until a few days before they calve, when they are moved into straw pens.

In the autumn herd, dry cows are kept outside in long-standing grass, which is low in energy. They calve outdoors from September onwards and their calves are moved into hutches and put on to milk powder after 12 hours.

Problems with pneumonia have seen them switch to a more simplistic style of youngstock management in recent years.

“As soon as we can, once calves are two or three weeks old, they go out to the field where they receive two-and-a-half litres of milk twice a day and pellets,” explains Tom. He says this also helps promotes grazing from a younger age.

Mr Davies says the changes at Trelay are not drastic and can be emulated on most UK dairy farms. “Around 90% of the dairy industry could do what they’ve done,” he adds.

With milk price volatility here to stay, he believes farmers need to start thinking about how they can future-proof their businesses against periods of low income.

“What you need to do is insulate your business the best you can against volatility, and in my opinion improved grassland management and grass utilisation can help.

“Quality grazing grass is the lowest-cost feed you have available to you. But it has got to be quality. Poor grazing is costly. Where is the business logic in wasting the cheap feed and replacing it with an expensive one?” he questions.

Despite initial trepidation, the family says moving towards a lower-cost system has definitely been the right thing – and not just financially, as it has also improved quality of life.

“Yield a cow is down but that doesn’t matter if we are making a profit. Gareth has made us think outside the box.

“I think we have been brainwashed over the years to push yields. But cows are cows, they are not pigs,” says Chris.