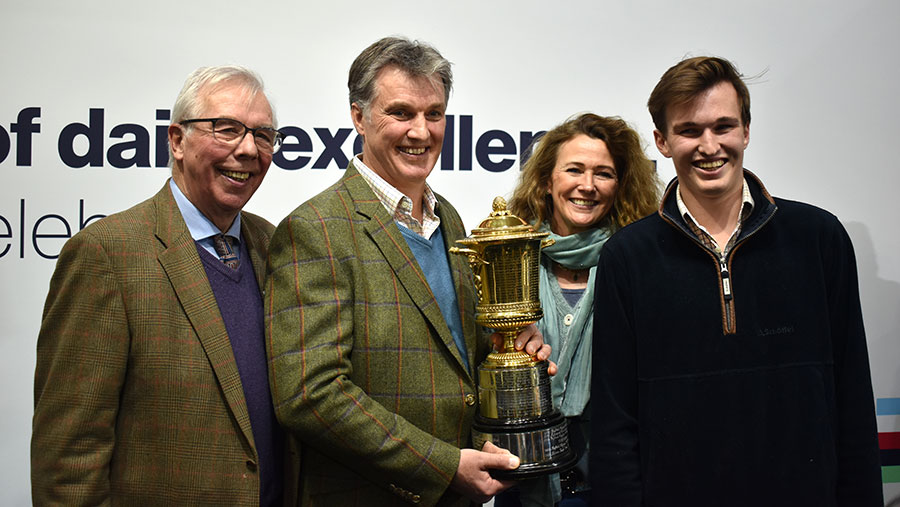 An Essex family has won the NMR RABDF 2020 Gold Cup, as the prestigious award celebrated its 100th anniversary.

Sponsored by the Royal Association of British Dairy Farmers (RABDF) and National Milk Records (NMR), the winner’s trophy was presented to John Torrance, his wife, Lucy, and his father, Robert, at Dairy-Tech, Stoneleigh Park, Warwickshire, on 7 April. The Covid-19 pandemic had delayed judging and presentation of the 2020 award.

Genetic merit is a key priority. So much so that the herd ranks in the top 12 in the UK for profitable lifetime index (PLI) – which averaged £218 in April 2020. John’s goal is to breed a cow that will produce 70,000 litres of milk during an average of five lactations.

The herd is housed year round, with a calving interval of 382 days, conception rate of 43% and a pregnancy rate of 29.8%.

The family also picked up the NMR Silver Salver award at the event, which is presented to the qualifying Holstein herd with the highest value of total solids produced (butterfat and protein). The Torrances’ herd averaged 960.53kg.

Congratulating them on the win, judge and former RABDF chairman Peter Alvis thanked the judges and the finalists for their help and patience in a challenging year. He added it had been “a really tight competition”.

To qualify for the Gold Cup, herds must have more than 100 animals with qualifying lactations in the milking herd, as well as an average somatic cell count of 200,000/ml or less – or 250,000 cells/ml for organic herds.