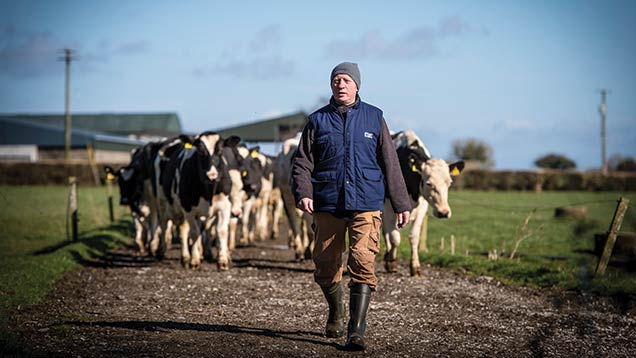 Improved calf health and better fertility are just some of the benefits being seen by one BVD-free dairy herd in Ireland.

About eight years ago, Mr O’Flaherty and his vet Frank O’Sullivan from Patrick Farrelly and Partners, decided to look into herd BVD status after witnessing a combination of small disease indicators across the herd.

“We were seeing some heifers that were not growing or thriving. They were about 18 months old and were beginning to stand out as further behind the bunch,” says Mr O’Flaherty, who milks 100 cows and rears his own replacements.

Fertility was also starting to slip and the farm was witnessing physical deformities in some calves and a high herd somatic cell count which, when added together, all pointed to potential BVD exposure.

As a result, Mr O’Sullivan decided to undertake a testing strategy to determine whether there were any persistently infected (PI) animals on farm and if the herd had been exposed to BVD.

A PI animal is born shedding the BVD virus and is produced when its dam is infected with BVD in the first 120 days of pregnancy or if the dam is a PI herself. PIs are one of the main routes of BVD transmission.

Some PIs will die soon after birth, but a significant proportion will live and may show themselves as ‘poor doers’, such as the heifers identified by Mr O’Flaherty. Consequently, Mr O’Sullivan decided to blood test these animals for BVD virus.

“One heifer came back positive and was culled for being a PI,” Mr O’Sullivan explains. “At the same time we also blood tested a sample of different age groups of stock for antibodies to see how widespread BVD was on farm.”

The tests came back antibody positive showing the animals tested had been exposed to BVD. A bulk milk sample was also tested for virus and came back negative, which showed there were no further PIs in the group of milking animals contributing to the tank.

The dam of the PI heifer was also screened and tested negative for virus.

However, following the identification of the PI heifer, the decision was made to immediately vaccinate all breeding stock for BVD to reduce infection risk.

Biosecurity risk was relatively low, with the farm predominately relying on AI to produce replacements. However, with a stock bull being bought in every three to four years, and cattle farms in the surrounding area, there was still a need to adopt an ongoing strategy.

Bulls are now tested and vaccinated for BVD at purchase and quarantined for 60 days. They are also bought from a known source.

In addition to vaccination, following the introduction of the voluntary stage of the Irish BVD eradication scheme in 2012, the farm started tag and testing calves for BVD virus to identify PIs. This uses a specialist tag to automatically take a tissue sample, which can be sent away for testing.

The national eradication scheme was made compulsory in 2013, so now all calves must now be tested for BVD.

Tag and testing has never identified a PI in Mr O’Flaherty’s herd. However, he is convinced of its benefits and says he would have tag and tested even if the eradication scheme hadn’t existed – as long as there was a framework in existence for farmers.

“For relatively little cost it will clear your mind. A disease like BVD won’t go away on its own. It’s far simpler to deal with the odd PI as a calf and get it out of your system and the cost is cheaper than leaving it festering in the herd,” he says.

Having vaccinated and tested clear for three years, Mr O’Flaherty’s herd is now classified BVD-free. However, the farm will continue to vaccinate as any potential exposure to BVD could have catastrophic effects on such a naive herd.

Mr O’Flaherty says getting on top of BVD has resulted in marked improvements in herd health.

“In general we no longer have issues with heifers not thriving. We see fewer calf deformities and we’re seeing improved herd health and fewer forced culls, particularly for fertility. It’s my belief the BVD control strategy has helped lead us to this,” he says.

He also believes the fact animals are no longer immunosuppressed has helped lower somatic cell counts and mastitis rates.

BVD is the most common viral disease affecting cattle. Despite vaccines being around for 50 years, the disease is still thriving. A new vaccine launched by Boehringer promises to be easier to use and, with a one-shot primary course and protection against BVD virus type 1 and 2, has many unique features that will prove helpful.