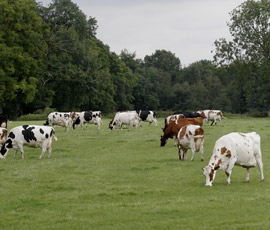 Speaking at a recent DairyCo discussion group in Gloucestershire, he said adopting this approach would allow the grass to recover and reduce problems later in the season.

“If you’ve had heavy rain and the paddock looks poached up, don’t panic. In reality if the grass root is still in the ground and there is plenty of moisture the grass should come back pretty well. Give it a week, see how things are and maybe then think about doing something later in the season,” he added.

“And if you find yourself with a hole in your grazing wedge because land had been taken out for silage earlier in the season, it is important to remember that the three-leaf rule is crucial and not to get tempted to enter paddocks too early.”

In fact, he said by putting cows out to graze on pastures at the two-leaf stage, potential pasture grown could be reduced by 15-20%, as 50% of the pasture is grown at the third leaf stage.

“A longer rotation means more grass by default. You are allowing the grass time to grow that valuable third leaf. Walk the pasture, pull out a few plants and check leaf emergence. Use it as another piece of information about your grazing,” he added.

He recommended the following methods for grazing fields with reduced poaching: