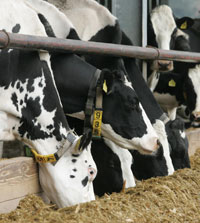 Dairy farmers who have already formulated winter diets using the crude protein figures of compound feeds need to re-think their rations based on metabolisable protein – it could lift yields by up to two litres a cow a day.

Metabolisable protein (MPE) has been identified as the protein most efficiently utilised by dairy cows, according to north-west feed compounders Massey Feeds who are now “breaking longstanding feed industry methodology” in a new approach to dairy cow rationing which moves away from formulating rations based on crude protein levels.

According to David Wilde, the company’s ruminant nutritionist, dairy farmers must start to change the way they look at the protein needs of their cows and not continue to follow the crude protein route.

“Moving away from basing rationing on crude protein is finally taking the guesswork out of what cows really need. Basing rationing on crude protein levels is wasteful as well as being detrimental to cow health. That may come as a surprise to farmers after all these years, but things must change if we want to feed cows correctly for optimum yield, keep them healthy and achieve the highest levels of profitability.

“Farmers need to adopt a new mind-set and get away from the idea that crude protein levels are an important part of the diet. This is not what the cow is actually using. The declaration of crude protein is an irrelevance; it does not have any bearing on the cow’s dietary requirements provided the metabolisable protein and metabolisable energy levels are calculated correctly,” Mr Wilde told a press briefing at Massey Feeds mill at Holmes Chapel, Cheshire.

The company’s new FiMLAC range of dairy feeds has been formulated to deliver correct levels of metabolisable protein (MPE) and not to overload the diet with rumen degradable protein (MPN), which the cow cannot use.

“The crude protein approach to rationing can cause gross excesses of rumen degradable protein leading to health problems if not removed. The process of removal placed great strain on the liver of the cow and takes up valuable energy which means it reduces the efficiently of the diet.”

Comparing FiMLAC 115 – one of the new range of feeds – with a typical 18% crude protein ration, Mr Wilde said crude protein levels were driven by the rumen degradable protein component (MPN) and not the metabolisable protein (MPE)

“The FiMLAC 115 contains 115g/kg of the more usable metabolisable protein (MPE) and 125g/kg of rumen degradable protein (MPN) while the comparative product has only 103g/kg MPE and still has 125g/kg MPN.

“If 8kg per cow per day is fed, FiMLAC is delivering 96g per day more of the usable MPE which equates to an extra two litres of milk a cow a day at the same feeding rate.”

Mr Wilde said that in addition to the extra production there was another issue caused by an excess of MPN.

“If grass silage is being fed (which can contribute 140g/day of excess MPN alongside the same feeding rate of 8kg/cow per day) the FiMLAC protein balance results in an excess MPN figure that is below the target maximum of 250a day. That compares with the typical 18% crude protein ration which contributes well over 316g/day.”

The excess MPN creates a problem for cows because they have to waste energy removing it and there is a further risk of the MPN placing a potentially harmful burden on the liver and impacting on fertility.

The new FiMLAC feed range will also be the first rations to be offered to milk producers that replaces inorganic trace elements with those derived from organic sources. The decision to make the switch has been based on extensive research showing the benefits of using organic zinc, manganese and selenium.

Patrick Charlton of Alltech, which is supplying the organic trace elements for the new range of dairy feeds, said milk producers had much to gain from a more strategic approach to the use of minerals.

“Dairy farmers should look at the complete diet of their cows to make an accurate assessment of trace element needs. And dry cow management in particular is something that needs to be looked at very closely in terms of the mineral requirement. There still isn’t enough being done to meet the precise trace element needs of the dry cow,” said Mr Charlton.

He added that selenium had traditionally been supplied in the form of inorganic sodium selenite, but this had restricted potential to meet cows’ needs due to its inherent toxicity and poor assimilation qualities.