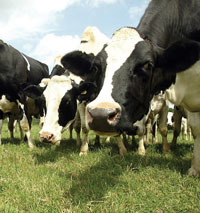 The debate between which dairy system was more sustainable financially and environmentally was almost irrelevant; it was which system suits the individual farm and operator that mattered, delegates to the British Cattle Breeders Conference heard.

Richard Rhone, herd manager of the Drax family’s 400-cow high input system near Wareham, Dorset, told delegates that while grass systems were usually cheaper, high-input systems were needed to satisfy demand. As a Waitrose supplier he was aware of the need to put that message across to the consumer. “Milk sales per unit of input are higher and in future we could improve our position further by reducing the carbon footprint by generating electricity from slurry.”

Cows produce 9000 litres of saleable milk a head generating, excluding SFP monies, a margin of 3.77p/litre before rent and finance.

With 900 cows in two herds block calved to maximise use of spring grass, infrastructure of tracks was essential to exploit the grazing potential.

Use of Jersey and Holstein stock would see management focus on crossbreeding to improve the herd’s hardiness.

With average yields of 4500 litres a cow the system generated a margin (excluding SFP monies and ex-rent/finance) of about 6p/litre.