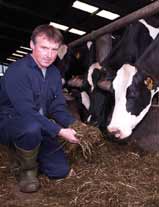 Fine-tuning the diet of an autumn-calving herd to achieve maximum dry matter intake during the dry period is generating daily milk yields of 40 litres within 10 days of calving at a Carmarthenshire farm.

Simon Davies, who calves 70% of his high-yielding herd in the autumn, says the diet of the dry cow is critical to herd health and milk output post-calving, with cows averaging 10,300 litres.

The 180-cow Castellhyfryd pedigree Holstein herd is housed for most of the year, but when cows are dried off seven weeks before calving they are put on to rough grazing for the first four weeks.

Their grass diet is supplemented only with minerals and for the remaining three weeks the cows are housed on straw yards where they get a ration of 20kg silage, 3kg straw, 2kg Trafford Gold and 1kg transition cake. Dry cow minerals are fed ad lib and cows have access to mineral buckets.

“This builds up their energy requirements to get them to the right stage of energy to calve properly and to prepare the rumen to start milking from day one,” says Mr Davies.

“When a milking cow is prepared properly she can produce up to 40 litres within 10 days of calving. When this happens you know she is on the right diet.”

Mr Davies says indoor feeding allows cows to be pushed to the limit. “By calving in August and September I know the cows will be in day and night for the next six months and will have a consistent diet throughout.”

The post-calving ration consists of 40kg silage, 2kg big bale haylage, 1kg straw, 5kg blend, 5kg Trafford Gold, 150g minerals and rumen protected fat. This diet gives maintenance plus 31 litres of milk. Cows producing above this volume are fed cake in the parlour to a maximum of 9kg for an animal producing 50 litres. Maize forms part of the diet from October to May.

The level of parlour-fed concentrates builds up over a three-week period and is automatically calculated by being programmed into the fully computersied 20/40 parlour. “It doesn’t matter if a cow hits 50 litres, she won’t get the maximum until 21 days because it would be too much for her. If she is hungry she will eat more of the outside ration,” Mr Davies explains.

The cows are on straw yards for about five days after calving, but it can be up to 10 days for the older cows. “It all depends on how the cow has calved. I tend to judge on their appetite. If she has a strong appetite and comes into a good volume of milk within a couple of days I know she has recovered well.”

As well as the fibre content of the diet and the quality of the raw materials, Mr Davies says silage quality is essential if the cow is to perform well. The analysis of his first cut silage showed a DM of 29%, ME of 11.4mj/kg DM, crude protein of 16.3% and a pH of 4.1. This young crop was balanced with sufficient straw and haylage.

“We have definitely been hitting higher peaks since we started milking three times a day. It’s noticeable from mid to late lactation, milk volume doesn’t tend to fall off.We rarely get cows dripping milk and this has resulted in fewer health problems.”

He also believes longevity is enhanced by three times a day milking, with seventh, eighth and ninth calvers in the herd. One cow, in her eighth lactation, is NMR’s highest daily lifetime yielder in Wales.

Mr Davies believes the dry period is an opportunity to get the herd in tip-top shape for calving and milk production and favours a period of between six and eight weeks. “If the cows are dry for longer it is more difficult to get them back into gear, seven weeks seems to be the ideal,” he says.