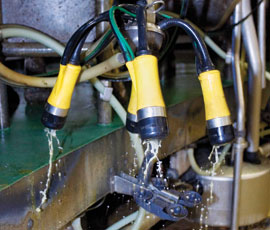 European MPs have agreed rules to give dairy farmers more power to negotiate fairer prices for their milk.

The European Dairy Package, which still needs to be confirmed by the European Parliament before it is introduced, aims to balance the power between producers, processors and retailers.

Under the package, which was agreed by MEP and European Council members in Brussels on Tuesday (6 December), EU governments will be able to enforce compulsory contracts for farmers.

In a bid to help farmers in EU countries where milk contracts are not routinely agreed, the contracts will include a written offer for raw milk, including a guarantee that the price will be paid for a minimum of six months.

If the farmer decides not to accept the offer, the contract can be negotiated, MEPs said.

The rules will also see more power given to producer organisations to allow them to negotiate raw milk prices for their members and given them more power in the dairy supply chain.

Producer group members will also be able to increase production by up to 33% of their country’s national production, or 3.5% of the total EU production.

Head of the Agriculture Committee negotiating team and Northern Ireland MEP, James Nicholson, said the measures, which were proposed in 2009 to help dairy farmers cope with the abolition of milk quotas in 2015, would allow producers to better organise themselves.

“Dairy farmers often feel they are fighting a David versus Goliath battle with many of the companies they supply to,” he said.

“These plans will re-tip the balance to ensure farmers get a fair price for the milk they produce, as determined by the market rather than by processors.”

The package, which is expected to be formally adopted by the European Parliament in February, would give national governments the ability to introduce tougher measures to ensure the supply chain operates transparently, Mr Nicholson added.

But the NFU said the EU had missed a golden opportunity to strengthen dairy contracts and create a more sustainable future for the EU’s dairy sector.

“The agreement does little more than maintain the status quo for our farmers,” said NFU chief dairy adviser Rob Newbery.

“Disappointingly it seems farmers will not be protected by common contract rules across the European single market. This is a real missed opportunity by the European institutions to help increase the bargaining power of farmers.”

But Mr Newbery said the package did not close the door on member states legislating for minimum contract terms – something farm minister Jim Paice had said he would consult on.

“Meanwhile, we must re-double our efforts as a dairy industry by working with the dairy processors and DEFRA to draw up a voluntary code of practice that will give farmers better bargaining power and greater revenue from milk sales,” he added.

“Should this process fail to offer farmers the fairness and transparency in contracts they deserve, we will be pressing DEFRA to legislate.”