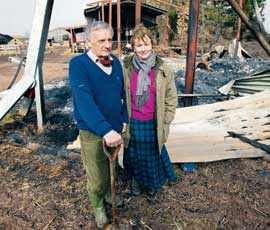 A dairy farmer has suffered a string of attacks against his business, which began after he publicly backed the pilot badger culls.

Stewart Thomas and his family are devastated after two suspected arson attacks caused around £60,000 worth of damage to their dairy farm, in Old Cleeve, Somerset.

Mr Thomas, whose herd tested positive for bovine tuberculosis for the first time last month, gave an interview in his local newspaper in support of the pilot badger culls in his county.

Since then two fires have devastated his dairy farm, and milk is believed to have been contaminated.

The first blaze broke out around 3am on 1 February in a shed where 50 calves were being kept.

Mr Thomas and his wife Marie were jolted from their sleep by the smell of burning.

The couple dialled 999 and were able to get all the calves out of the shed unharmed before trying to extinguish the fire with buckets of water.

“It was very frightening. Glass was shattering and the roof was falling in while we were getting the calves out,” Mrs Thomas said.

Firefighters extinguished the flames but 1t of powdered milk, costing £1,400 was destroyed and serious damage has been caused to the roof.

A week later, on 8 February, a sample taken at the dairy detected that the milk had been contaminated. Tests are ongoing to determine the source of the contamination.

“At first we thought the fire had been an accident, but I am concerned that this may be part of an organised attack,” Mr Thomas said.

The milk tanker had been on its last collection and contained 20,000 litres of milk, which has since been destroyed at the family’s expense.

The family will also have to pay £6,000 in costs to refund producers.

The second fire broke out on Monday, 20 February around 4.45am. It destroyed a shed and everything stored inside.

A spokesman for Devon and Somerset fire and rescue service said: “We have completed our investigation and we believe it was started deliberately.”

Mr and Mrs Thomas are suffering sleepless nights because of the mental anxiety brought on by the attacks.

“I can’t sleep at night because I’m so worried. The biggest concern is that it will happen again,” Mrs Thomas said.

Security measures have been stepped up on farm, but the couple admit they are concerned for their own safety.

Mr Thomas believes he is being targeted by animal rights activists.

“We’ve been here nearly eight years and have had no trouble and then there’s that piece in the paper and this all happens,” Mr Thomas said.

Avon and Somerset Police is urging anyone with information about these attacks to contact them.

Inspector Lisa Simpson, from Minehead Police Station, said: “Arson is an extremely serious offence. Not only, as in this case, does it cause thousands of pounds worth of damage to people’s homes and businesses – it also puts people’s lives at risk.”