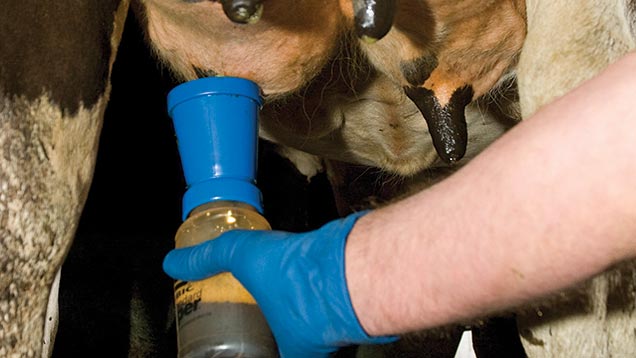 A quick on-farm test could help dairy farmers significantly cut their antibiotics use for clinical mastitis.

Trials are running in the UK on the Vetorapid system, which lets farmers identify which type of bacteria is behind a mastitis case.

The test can tell farmers in 24 hours whether the cow would benefit from antibiotic treatment.

E coli and coliform mastitis have a 90% self-cure rate, while streptococci and staphylococci have low self-cure rates and need antibiotic treatment.

Currently most farmers treat every case as the bacteria type is unknown and sending samples to the lab can take too long.

Vetorapid has only been available in the UK since January and on-farm culture is not yet widespread in the UK.

But a large study in the USA using a test kit saw farms cut antibiotics use by 50% without a major impact on milk quality or mastitis outcomes.

Early stages of a trial at Hill Dairy, part of the Coombe Farm group near Crewkerne, Somerset, are showing positive results.

Herd manager Andrew Dowding, who runs the 390-cow organic unit, told a Soil Association farm walk that the test fitted in well with the daily routine.

He said the test could be done overnight, which was far quicker than sending them off to the lab.

Vet Rachel Hayton from Synergy Farm Health, running the trial, said the number of treated cases had dropped off in the first four months of the trial.

“It is a very effective way of reducing antibiotics use,” she said. “It is has massively reduced our treatment rate so far.

“For mild cases of mastitis, the gram negative organisms often cure if you are treating them with the antibiotics – but they would have done anyway.”

The system works by taking a milk sample and dabbing some into each part of a three-sided agar plate.

A day later, farmers can see which section of the plate has seen growth and decide whether or not to treat with antibiotics.

The Duchy Future Farming Programme, delivered by the Soil Association in partnership with Waitrose and the Organic Research Centre, is about to start its own field labs with the system.

So far eight farms have registered for the field labs, which started in February. Full results are expected over the summer.