The Mycoplasma bovis bacterium, found on dairy farms throughout the UK, is a major contributor to calf pneumonia. It is also associated with mastitis, arthritis, meningitis, eye and ear infections, abortion and infertility.

However, while thousands of cattle have been culled in New Zealand since the detection of the disease in July, in the UK the threat of M bovis is less widely acknowledged.

Dairy farmer Duncan Maughan, who farms at Cumrew, near Carlisle, is well aware of the threat it poses. It was less than 12 months into dairying at Gateshaw Mill Farm in 2011 that he first noticed signs of M bovis.

Eventually, the disease cost him an estimated £1m and led to the culling of the entire 275-head herd he ran with his father, John.

He first spoke to Farmers Weekly of his plight in 2014. We caught up with him to find out how his business has recovered and why he thinks it’s essential to raise awareness of this devastating disease.

The cost of M bovis

In total, Mr Maughan reckons the disease has cost him about £1m, which includes the loss of earnings and stock as well as huge feed and vet bills.

He believes M bovis is more severe than foot-and-mouth and bovine TB. And with no protocols in place for dealing with the disease, Mr Maughan had to do much of the research himself.

“For two years we dealt with sick and crippled cows suffering from severe arthritis, low yields, inflamed udders with open sores, abscesses, swollen hocks and feet and poor fertility – as well as unexplained deaths,” he says.

At one point, he was feeding a 48-litre ration to get just 16 litres. “Their feed intake just went up, but milk yields dropped off from 26 litres to 16 litres,” he explains.

It was only when Mr Maughan spoke to someone in the USA with knowledge of the disease that he was advised to cull animals.

“If we had known back then what we know now, we would have culled straight away” Duncan Maughan

While farmers can get an autogenous vaccine made for M bovis, there’s no vaccine for other strains of the disease. Also, many widely used antibiotics do not work, because the bacteria have no cell walls and they are very good at evading the cow’s immune system by changing their surface proteins.

“If we had known back then what we know now, we would have culled straight away,” Mr Maughan says.

Mycoplasma can live in the soil, slurry, silage and general environment and survive by living off wet mucosal surfaces, so after the herd was culled in October 2014, the farm was left to rest for 11 months. 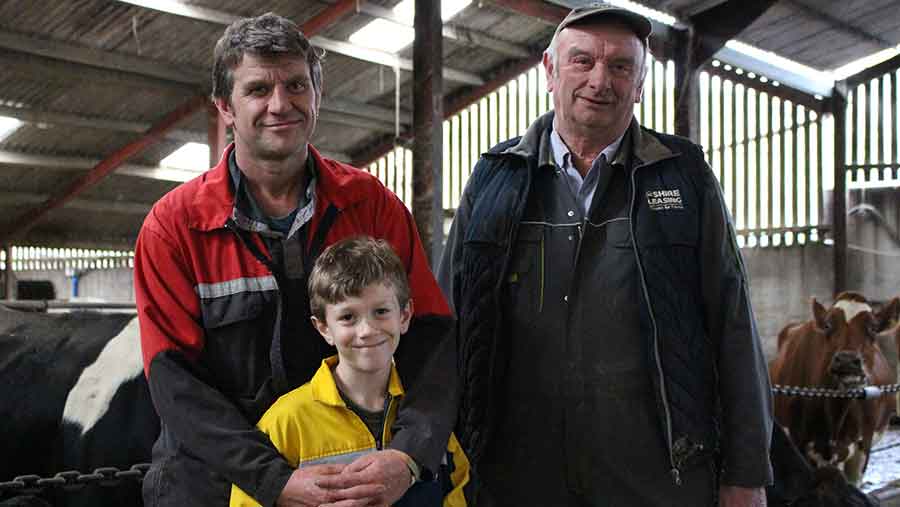 When it came to restocking at the end of 2015, Mr Maughan was very cautious. “I don’t look at animals in the same way anymore and I can spot stock straight away that are infected. I look for telltale signs like swollen joints and dairy cows with three quarters.

“There’s more of it about than you might think. I have had many farmers contact me about this disease and I believe a lot of farms may have it, but they don’t know what the signs are. It’s when you get multiple-strain infections that you run into serious problems,” he adds.

Mr Maughan restocked with a batch of cows from a single source. He also tested for M bovis and other infectious diseases such as Johne’s by using bulk milk tests. “We could have blood-tested every animal to see whether they were carrying the other strains, but that would have been too expensive.”

By breeding his own replacements, Mr Maughan plans on increasing his herd as quickly as possible from the 178 cows currently milked.

He will also buy in animals from farms of a known health status, and he likes to see the entire herd he is buying from to identify any signs of the disease.

He has also started using a homeopathic treatment to protect stock.

While there is no scientific evidence to support the success of this type of treatment, Mr Maughan says he has seen an improvement in herd health.

“I had a friend that was using homeopathy, so I started reading up about it. It is a broad-spectrum cover that is added to the water,” he says.

Since restocking in 2015, hardly any antibiotics have been used in the herd. He adds: “In the past two years we have had the vet out only four times and that has been to deal with difficult calvings.

“We don’t vaccinate for anything and our milking routine of pre-wiping, stripping cows, attaching the unit and spraying is the same.

“My milk buyer monitors antibiotics use. We use udder mint if we have any cases of mastitis, although it really hasn’t been a problem. Our cells counts are down at 172,000 and we have treated only three cases of mastitis since 2015.”

The cross-bred herd of Ayrshires, Holsteins, Brown Swiss, Dairy Shorthorn and Swedish Reds are yielding 8,000 litres a cow at 4.2% butterfat and 3.5% protein.

Mr Maughan says the calves – which will normally show signs of M bovis first – have shown the biggest improvement. “They are so much more vigorous; they are fantastic.”

In New Zealand, where mycoplasma has been identified on more than 20 farms, the government is taking swift action to slaughter the animals. Farmers affected can apply for compensation.

“They are treating the disease like we would treat foot-and-mouth,” says Mr Maughan. “Although we will never get compensation for this disease, we need to be realistic about getting to grips with it and controlling it.

“I would hope, in 10 years, it will be treated in the same way as BVD and Johne’s. My advice to farmers who think they have the disease is to blood-test cows to see what strains are present. If they are found to have multiple strains, then culling is the best option.”