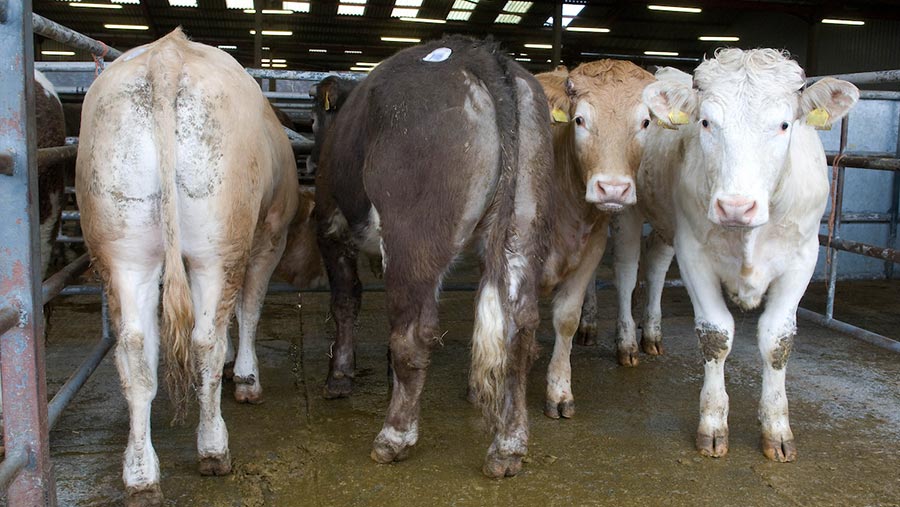 Mycoplasma bovis (or M bovis) is a bacterial disease found in dairy and beef cattle. It can lead to serious illness in cattle affecting health and production.

There is currently no treatment for the disease once contracted, although a vaccine is now available in the UK and some of the conditions it causes can be treated.

The best way to control the disease is by avoiding transmission in the first place. To do that it is important to recognise the symptoms quickly. The has recent developments with vaccination could also be a gamechanger in disease prevention.

Mycoplasmas are very small bacteria that belong to the class Mollicutes (meaning soft skin). More than 12 different mycoplasmas and related species occur in cattle, but few result in disease.

Mycoplasmas are totally dependent on the animals they infect to provide the nutrients they require.

Mycoplasma bovis causes the most concern to UK farmers because it can be difficult to treat. The organism has a number of defence mechanisms, which include:

Vet Graeme Fowlie from Meadows Vets explains that M bovis works a bit like bovine viral diarrhea in that it depresses an animal’s immune system. Months can go by without any symptoms, but then flare-ups can occur.

What diseases does M bovis cause?

Mycoplasma causes immunosuppression, predisposing animals to other diseases and infections.

How is it transmitted?

By close and repeated contact over short distances through aerosol transmission; untreated infected milk can also be a source of infection to calves.

Transmission of M bovis “within cow” is thought to be possible both from the udder to other organs and vice versa.

In situations when herds have concurrent problems (other diseases such as salmonellosis or BVD) or very poor nutrition/environments, mycoplasma species outbreaks can be severe both in terms of numbers of cows affected and severity of clinical signs.

Some herds may not know they have it, as it can be carried by animals without any symptoms. However, when animals are stressed it can cause shedding of the bacteria and symptoms to appear.

How can you diagnose it?

Diagnosis used to rely on selective culture media and prolonged incubation. Growth usually becomes apparent in a few days but in some cases it can take up to 21 days.

Techniques based on polymerase chain reaction are also available, but most commercial kits are designed to detect only M bovis.

Specialist laboratories use the PCR/DGGE method, which can detect and identify mycoplasma species, including mixed mycoplasma infections, in one test.

Bulk tank culture and PCR have been advocated as ways of monitoring and screening herds for the presence of M bovis mastitis. However, successful bulk tank culture relies on a clean milking routine.

Serology is an established method of detecting disease in a herd and can provide evidence of infection.

The largest risk is considered to be from the purchase of cows or heifers clinically or sub-clinically infected with M bovis.

Make sure you get a detailed history, purchase from low somatic cell count herds and screen the herd from which animals have been purchased or from individuals quarantined before joining the main herd.

Maintaining a strictly closed-herd policy is the best method to minimise the risk.

Feeding of waste milk to calves is not recommended where Mycoplasma bovis has been diagnosed.

Is there a treatment?

Prevention has been the only way to deal with the disease but now a Mycoplasma bovis vaccine developed in the US has been granted access for use in the UK under the special import certificate (SIC) scheme. The vaccine has been in use for less than a year.

How can vaccination help?

While these results await verification, further work on how the vaccine achieved these effects is required.

When should you vaccinate?

Dairy cows should be vaccinated at drying-off, and beef herds six to eight weeks before calving. It takes five weeks for antibodies to be produced and then a further week for them to present in colostrum.

What is the cost?

The cost is similar to other bacterial pneumonia vaccines.

What should I do if I think I have M bovis in my herd?

Investigate the problem by taking post-mortems from dead calves and conduct PCR analysis.

Access to the vaccine is via the SIC scheme – your vet must apply to the Veterinary Medicines Directorate for each herd.

This article was updated in August 2020