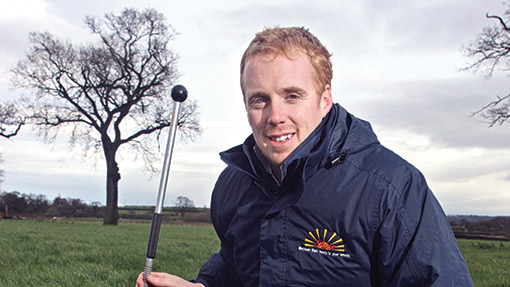 Spring turnout is a distant dream in mid-February for most dairy farmers. But by that time this year, Cheshire milk producer Mat Venables had half his herd of 480 cows calved and taking their first bite of spring grass.

While this winter’s extremely wet conditions delayed turnout on the farm by about a week, grass measurements show there was even more grass on the farm’s paddocks – having an average farm cover of 2,500kg DM/ha compared with 2,300kg DM/ha in a normal year. The first paddocks were “shut up” last October.

See also: Grazing strategy to help cows make most of grass in wet

It’s eight years since Mr Venables really began to get his teeth into developing a system of milk production based on the maximum use of grass.

Adopting the ethos of the New Zealand system of paddock grazing and operating a management programme underpinned by reacting to precise grass measurements, has enabled a successful and profitable dairy business to be established at Pigeon House Farm, Handley near Chester.

The 132ha farm carries a spring-calving herd of 480 head – all based on New Zealand genetics – that Mr Venables runs with his wife Nikki on a contract farming arrangement with Randle Cooke.

Although land away from the main farm provides all the forage and fodder beet, as well as grazing for youngstock, the Pigeon House unit is the “grazing platform”, devoted solely to providing grazing grass for the milking herd.

Weekly grass measurements are taken using a plate meter to provide a complete picture of the entire farm’s grass production – and to highlight potential surpluses and shortages in the weeks ahead. The aim is to graze paddocks down to 1,500kg DM/ha.

“In an ideal spring we’d expect to have cows out by 1 February – and we did manage to get 120 milkers out for one night in early February this year. The highest amount of grass on the paddocks was 3,500kg/ha – that’s more than we’d usually have at this time of year.

“We aim to have about 170 cows out by the end of the first week in February, but this is a system that relies on flexibility to get the best out of it,” says Mr Venables.

The farm’s annual grazing plan has a target of 30% of the grass at Pigeon House Farm to be grazed in February, 70% during March and then cows move on to a 30-day grazing round in April.

If ground conditions are favourable in the autumn, there will be 60% of the grazing platform in use in October, reducing to 25% by November and to 15% by December. By the end of the year more cows are being dried off in readiness for a six-week break in production before calving resumes again in early February.

And key to making the most of this system for this winner of the 2013 British Grassland Farmer of the Year award – aiming for a comparative farm profit of £2,000/ha on the grazing platform – is being able to “react and adapt”.

“You’ve got to keep focused on how you make the best use of the grass on this system, and there has to be a lot of flexibility built into how you operate.

“There can be times when we can have cows out grazing for just three hours and then bring them in. But by doing that we know we’ve made the best use of the grass we’ve got at that time. Other occasions may see us use a back-fence so that we can turn cows out again after milking to clean up if we think it’s needed.

“We need to leave 1,500kg DM on the paddock when the cows have gone. If there’s more we’ll not hesitate about putting cows back in there for another couple of hours to achieve that. Again, it’s all about flexibility.”

Although a grass-based system may appear to be less complicated compared with the way more intensively managed herds are run, Mr Venables is keen to point out that it actually demands more in terms of ongoing management decisions.

Taking weekly grass measurements across the entire farm underpins this system, but it’s the need to respond to what grazing is available that’s crucial.

Cows are fed 18kg DM/day, of which 2kg DM is fed as a blend in the parlour as a flat rate feed. “But if at any stage in the season we are aware that the paddocks are not providing the 16kg DM the cows need each day, we will buffer feed with silage to achieve it.

“But equally, if we have more grass building up on the grazing platform, we know we can safely take a field out of the rotational system and reseed it.

“We use the results of the previous season’s performance to assess what paddocks need reseeding so there’s no guess work,” says Mr Venables, who direct drills after spraying off to achieve the fastest route to getting paddocks back into production.

The first nitrogen is applied in February at 40kg/ha, with a further dressing of 30kg/ha in March. After each paddock has been grazed it is given a 20kg/ha nitrogen application until September when the final dressing is applied at 40kg/ha.

Mr Venables has no hesitation when asked about how he makes the most efficient use of grass: “To get the best use of the grass you have available there is nothing to beat a rotational grazing system.

“It enables you to make the most profitable use of the grass and to ensure cows are receiving what they need in dry matter terms while protecting the land.”

He acknowledges the challenge of grazing 480 cows as one herd – and is actively looking for another farm to enable the business to expand – but it’s a system that’s working well and is profitable.

“We are looking to increase milk yield/ha but this is still a very young herd. More milk will also come from genetics – both how we apply them to the cows and the grass.

“The New Zealand genetics we’re using are producing the right cows for the system. But this is a business that’s not about individual cow yields but how much milk is being produced a hectare. Yield a cow has no correlation whatsoever to profit,” says Mr Venables.