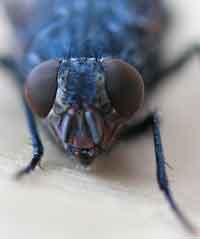 Flies are the bane of many farmers’ lives. Not only do they create an undesirable working environment, but they also have huge implications in terms of animal health and welfare.

“About 2% of heifers have blind quarters at first calving as a result of fly transmitted mastitis,” says James Allcock of Lambert, Leonard and May.

“The trouble is, flies are inherently difficult to control. Many farmers have invested in various methods of fly control and seen little effect.”

This was something recognised by forward thinking dairy farmer Rob Williams of Stryt-yr-hwch, Sontley, Wrexham, who was becoming increasingly frustrated with poor results from cow pour-ons.

“The problem with pour-ons is they only repel adult flies, rather than tackling the root of the problem,” he says.

With this is mind, Mr Allcock, decided to try fly parasites. “Fly parasites destroy the fly larvae before they hatch, rather than attacking the adult fly,” he says

Fly parasites seek out pest fly pupae and lay their eggs inside as part of their natural reproductive cycle. The parasite then hatches and consumes the pest fly’s larva. The adult parasite larva that emerges then repeats the cycle.

“In the UK, about 5% of fly larvae are naturally parasitised anyway,” he says. “The trouble is, when fly populations are at their height, the parasites cannot keep up and, consequently, fly populations explode.

“By introducing extra fly parasites you are artificially boosting the natural population.”

Fly larvae containing the parasites are imported from Texas and within five days begin to hatch.

One parasitic fly (pictured below) is about the size of a gnat and will lay 50 eggs in a number of pest fly larvae, says Mr Allcock. “We recommend that parasites are applied at a rate of 50,000 per 100 cows every two weeks.

“Where the parasites are spread is critical. For maximum efficiency, they must be scattered in prime locations for fly breeding.”

Flies still remain a problem right until the end of September, but, ideally, parasites should be introduced at the start of April to get on top of numbers.

The parasites are incredibly easy to use, says Mr Williams. “We simple scatter the larvae on key areas around the farm as if we are sowing seeds.”

“Every fortnight we spread a couple of bags of parasites in and around the slurry pit, round the calf pens and on yard muck and cow tracks.”

As a result, fly populations have reduced significantly. “The parasites have not eradicated the problem, but there is a marked decrease in flies. This has significantly improved our working environment and made cows more relaxed at milking.”

Mr Williams has also seen marked improvements in the calf buildings. “In the past, the roof of the calf building has been almost black with flies, but since introducing the parasites, there has been a significant decrease in numbers.”

The farm has now been using fly parasites for three seasons and has subsequently stopped using fly pour-ons.

At the same time, Mr Williams has also provided mineral blocks containing garlic to dry cows and young stock and used fly sprays in some of the yard areas. 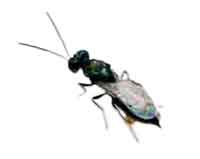 “Fly parasites are another tool in the box for controlling fly populations,” says Mr Williams.

With one bag of 50,000 parasites costing about £45, it is not a cheap exercise, but is definitely worth the investment, he says. “I would recommend others to give it a go.”

But you will not see results overnight. “It takes about two months to break the cycle of fly production and see the results,” stresses Mr Williams.

You will still need to control adult flies, says Mr Allcock. “Using residual chemicals can be effective in the short-term, but flies build up resistance incredibly quickly.

“The added bonus of using biological control methods, such as insect parasites, is you haven’t got the issue of chemical resistance.”

Natural fly control should be viewed as an effective method by conventional and organic farmers alike, he says. “Using fly parasites, enables us to shift the balance of nature in favour of the farmer and cows.”