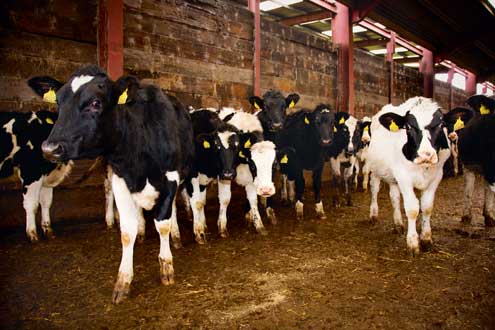 Dairy farmers should avoid getting caught up by cull rate and instead look at replacement costs, according to Greg Bethard of US firm G & R Dairy Consulting.

The goal should be to replace a herd as effectively as possible, he said. “Cull rate doesn’t mean much at all. It’s replacement cost that matters. This is the cost of maintaining herd size and structure.”

The full replacement cost could be simply calculated by subtracting the value of sold cows from the cost of replacements, divided by litres of milk sold.

“You may be proud of a 24% cull rate, but if the animals you sell are beaten up cull cows, they’re not worth much and your replacement costs are high.

“But if you’ve got a fat cow that could have got pregnant, she’s worth more. She’s leaving as beef as a value added product.”

Dr Bethard explained how this trade in value – the difference between the value of the cull cow and the cost of a replacement heifer – defined the cull decision.

“We need to keep our production assets, but trade them in at the right time. If we hold on to them too long, replacement costs will increase.”

However, he said there was the potential for cull rate to be too high. For example, when the proportion of heifers was too high in the herd, this could hit milk production and, consequently, profits.

“The aim should be to cull ineffective production assets out of your line and replace with an efficient model. It doesn’t make sense to fix a cow,” he said.

He explained that financial success was hinged on cow flow. But in order to maintain cow flow it was important to have enough heifers lined up to come into the herd.

“You want a total heifer inventory of 105% of the milking herd. This is a “hedge” risk avoidance strategy, as it allows you to select for your optimum cull rate.

“Most herds in the USA are doing this without sexed semen. It’s about good calf management. Every herd should be able to meet this heifer replacement rate.”

Although he said there was no one-size-fits-all approach, it was important for producers to start thinking this way. “I’m going to herds and telling them to cull more, not less,” he said.

Dr Bethard stressed that producers should set goals and track performance and spoke out against benchmarking. “Benchmarking is a bad idea,” he said. “It is inappropriate, as benchmarking across dairy frequently compares apples and pears.”

Nick Tyler from Kingsplay Farming Company, Calne, admitted when the herd underwent expansion from 200 to 600 cows in 2006, data recording was a “nightmare”.

“When we built the new dairy we were also losing 70-100 cows a year to TB. We were trying to double the herd size by buying in cows and replacing those lost to TB.”

This created data issues and consequently he decided to take control himself. It took time to get the data set accurate, but doing so allowed vet James Breen to analyse and act on accurate data. This in turn allowed greater understanding of patterns in mastitis infection.

Mr Breen explained when he started working on the farm its mastitis rate was rolling at 80-90 cases per 100 cows.

“We know from the DairyCo Mastitis Control Plan that this is not unusual,” he said. “But you need to know more than this headline rate. Where do these cases come from? “

The data highlighted the importance of the dry period in driving new clinical cases in the next lactation. “Mr Tyler was seeing high new case rates of four to five cases in the first 30 days after calving for every 12 cows,” explained Mr Breen.

SCC were also an issue, however Mr Breen again stressed the importance of not just looking at bulk tank figures, describing them as “a nonsense for monitoring”.

Instead producers should look at new infection rates. These figures at Kingsplay showed 20-25% of low cell count cows or maiden heifers were calving back round with high cell counts, which again pointed to the dry period.

As a result, Mr Tyler addressed dry cow management, starting at drying off. Now cow’s teats are brushed with peracetic acid, wiped with cotton wool soaked in surgical spirit, an antibiotic and teat sealant used and then post-dipped.

They also moved to a two-group system in the dry cow shed to reduce stocking rates, and mats in the early dry cow group were replaced with deep-filled wood chip beds.

“The data showed a lot of heifers were getting broken in the first 30 days of milk, so we have also split heifers off.”

New case rates are now at one or less than one in 12 in the first month. Consequently, mastitis cases have dropped significantly. However, since making improvements, infections during lactation were highlighted as an issue. However, accurate data recording and constant monitoring meant these issues were picked up early and could consequently be addressed.