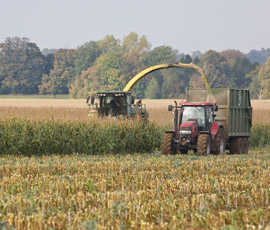 Maize crops that have been exposed to frost may need to be chopped this week, believes Neil Groom, technical director for Grainseed.

“If it’s only the top couple of leaves don’t worry because the plant will continue to move the sugar in the lower leaves into starch in the grain. But if all the green leaf has gone then chop the crop before a lot of yeast and mould grows on the dead leaf.

“Walk into the crop and have a good look. Often the first 10 rows around the field are affected because of cold winds, but the bulk of the crop is OK. Remember the plant is an annual so it will do everything it can to produce mature grains.”

Having been all over the UK in the last week, I have found many crops have a good level of milky starch in the cob and ideally we need another couple of weeks without the frost to allow the crop to get to full maturity, he said.

“I expected a higher dry matter in last week’s sample since my grain is almost fully fit, but with the amount of rain we keep having down here the plant is remaining very green.”
Bill Blake

A growing crop of maize will keep the soil open and draining well, but remember to be organised for wheat drilling or field cultivations after harvest so that the field doesn’t get saturated after the maize has been cut.

Bill Blake, sampling for Farmers Weekly near Crediton in Devon, is pleased with his crop. “I expected a higher dry matter in last week’s sample since my grain is almost fully fit, but with the amount of rain we keep having down here the plant is remaining very green,” he said.

“We are looking to chop at the start of next week if we get a weather window, which will allow us to bring the trailers out along the lanes without too much mud.”

Mr Groom agreed: “It’s going to be a year for contractors to use sweepers on the roads to keep them clean. It’s always best to have the brush there from the start of the day rather than trying to scrape off a layer with the bucket later on.”

Get the latest on the maize harvest at www.fwi.co.uk/maizewatch