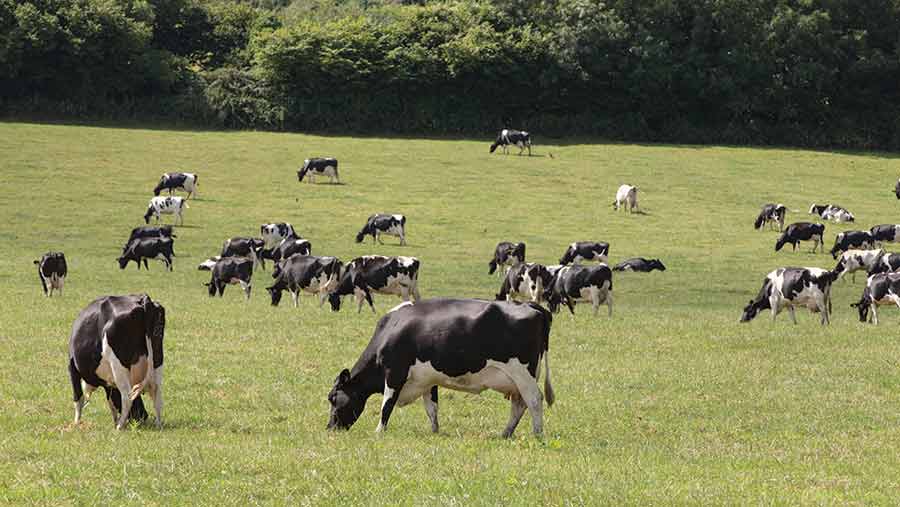 Dairy herds are at high risk of grass staggers this spring as farmers seek to counter low milk prices by reducing the amount of purchased feed in cow diets.

Grass staggers, also known as hypomagnesaemia, is a metabolic disorder of sheep and cattle caused by low levels of magnesium in the blood.

High rainfall is resulting in grass with low levels of magnesium and dry matter. Herds are further exposed to the risk of staggers because farmers are cutting back on supplementary feed intakes, warns Carmarthenshire vet David Staak.

“Cows don’t store magnesium in their bodies but rely on a constant supply of it in their diet,” says Mr Staak of the Market Hall Veterinary Practice, St Clears.

“Lush grass is very low in magnesium and if farmers reduce the amount of cake and minerals they feed milking cows, it is possible that the animals will rapidly become deficient in magnesium when grazing spring grass,’’ he says.

“The very wet conditions we have been experiencing may result in difficult grazing conditions with low levels of dry matter and magnesium intake from the grass.

“If farmers further reduce the amount of minerals or concentrate fed to lactating cows this could result in disastrous consequences.’’

High rates of nitrogen and potassium fertiliser applied to grass will also increase the risk of staggers, he says.

“Although farmers might be cutting back on nitrogen fertiliser, they will be using more slurry, which is high in potassium,’’ Mr Staak explains.

Mr Staak says it is useful to take five to eight blood samples from grazing cows to assess the level of magnesium in their system. But because the element can’t be stored, they will rapidly become deficient if dietary intake is limited.

He advises that if concentrate feeds are being removed from the diet in early lactation, an alternative method of mineral supplementation should be used.

Magnesium must be given to cows on a daily basis and he recommends feeding around 30g of magnesium oxide per cow per day.

“Milking cows should be fed magnesium oxide, which can be included in their concentrate, but it can also be added or mixed with silage if cows are being buffer fed,’’ says Mr Staak.

Magnesium chloride flakes can also be added to drinking water at a rate of 40g a cow a day.

“This is an inexpensive way of supplementing magnesium but the water trough needs to be large enough to ensure that all cattle are able to drink from the trough,’’ says Mr Staak.

But he warns that if the concentration of magnesium chloride is too high, water intakes will be depressed.

Boluses, which last for around 28 days, can be given to cows to help prevent the condition but they will not always provide enough magnesium to meet the cow’s requirements, he adds.

“It’s also a hassle to give a large herd of cows boluses and 28 days may not cover the entire period of risk,’’ Mr Staak suggests.

What is grass staggers and how can you treat it?

Grass staggers – or grass tetany – is more common in freshly calved cows because magnesium is secreted in milk. The older the cow the greater the threat, and higher yielding cows are at greatest risk.

National disease incidence in dairy herds is estimated to be 0.5%; many herds experience no problems, whereas others may see 10% of the herd affected.

Due to the rapid progression of the condition, many affected cattle are found as a case of “sudden death”. Early clinical signs include depression, loss of appetite and drop in yields, dullness and muscle stiffness, progressing to hyper-excitability, muscle tremors, twitching, chewing and hypersalivation, followed by collapse with tetanic spasms, coma and death.

“Sedation may be required to help control seizures in severely affected animals, while a slow intravenous infusion of calcium borogluconate and magnesium is administered. This is usually followed by administration of 25% magnesium sulphate subcutaneously.”