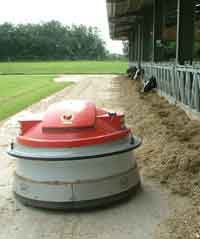 The unit, which replaces a defunct 180-cow enterprise, has been four years in the planning and beaten all the odds to become a reality, says Scott Kirby, HAUC farm manager.

“Since planning started in 2005 milk prices have fallen and most others, including steel, concrete, cows and feed costs, have risen,” he says.

Designed in-house and put out to contract, the greenfield development has been kept within budget by shelving plans including rubberising flooring for extra cow comfort.

“These are things we can do as and when the economics allow; we have to reflect the commercial realities facing dairy farms,” says Mr Kirby.

“The key thing was to get the infrastructure right. We have accommodation for 400 cows, but all the bits in the ground to take numbers to 600 should the opportunity arise.” 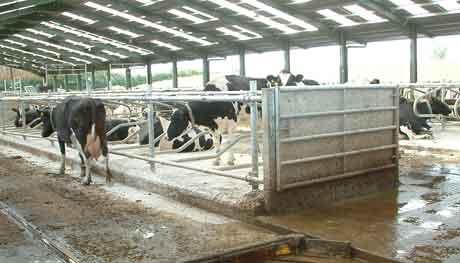 On site, cows are housed in wide, single-span cubicle sheds where a robotic drone pushes up feed throughout the day increasing appetites.

Automatic ventilation screens on some exterior walls react to wind speed helping protect sensitive computerised feeders. “As with the old unit we have designed a layout allowing scientific trials to be conducted in a commercial operation,” says Mr Kirby.

A 40-point rotary parlour was chosen over a rapid exit design for improved handling. Once milked, cows can be separated automatically on exit into holding areas for day-to-day or veterinary health checks.

Borehole and recycled water is used to flush the holding yard automatically – a technique used abroad – reducing the need for a tractor and scraper.

For herd manager James Todd new technology means two staff can manage twice-daily milking and cleaning without much trouble. Plans are afoot to increase milking to three times daily to boost output, which is expected to be 3.7-3.8m litres a year.

The College is hosting an Open Day on 2 September, allowing visitors to see this example of the latest in dairy design. Entry is free if you book a place by calling 0845 4900 142 or visiting www.farm-smart.co.uk otherwise it’s £5 on the day.