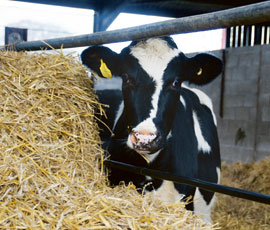 Feeding maize gluten to heifers can reduce bedding costs and create a cost-effective diet, according to one Gloucestershire heifer rearer.

Because the dung is firmer, when heifers are reared on maize gluten in covered, loose yards, they need less straw for bedding compared to a forage feeding system. And in livestock areas where straw is more expensive, this saving can offset the higher cost of maize gluten when compared to moist homegrown forage.

Typical straw use on a maize gluten system is about 1% liveweight a day. For a yearling this could equate to 2kg a day. In livestock areas where straw averages £80/tonne, bedding would cost 16p/head/day. For stock on a good quality silage diet, straw use can double to 32p/head/day.

Rob Dickenson, who rears 240 heifers on contract at Catswood Farm, in Bisley, Gloucestershire, feeds 5kg of maize gluten and homegrown barley straw from the age of five months and describes maize gluten as the perfect balance for straw.

He started contract heifer rearing after giving up milk production, converting the land to arable. “It made sense to capitalise on the straw we had available by feeding it to the heifers,” says Mr Dickenson, who grows 101ha (250acres) of spring barley and buys a further 121ha (300 acres).

The heifers have to achieve target weights of 600kg to calve at 24 months and maize gluten and straw enables him to achieve that goal.

“When we first started using maize gluten in 1996 it was as cheap as anything we could feed to get a 20% protein diet,” says Mr Dickenson.

Although the cost has more than doubled since then, from £80/tonne to £181/tonne, the figures still stack up because the diet achieves daily liveweight gains of between 0.75kg and 0.85kg. If the heifers were on a silage diet this would cost about £130/t/DM. However Mr Dickenson makes his main savings on bedding costs.

He also sees the value in not having to invest capital in slurry storage. “We store the manure in a pit and use it as we need it – it’s valuable stuff,” he says.

The simplicity of the diet means he doesn’t need to go to the expense of a mixer wagon either. “We put straight maize gluten into troughs and they get straw ad lib in a separate yard, we don’t need to mix anything,” he says.

Paul Broom, commercial manager at KW Alternative Feeds, says maize gluten and straw represent a cost effective diet. “In principle, it would have been more cost effective to feed this winter than wheat and other bought-in commodities.

“Even for a farm with unlimited forage it is perhaps more sensible to feed better quality forage to the dairy cows and maize gluten and straw to growing heifers. It won’t necessarily give the growth rates that cereals would, but do heifers really need that?”

Maize gluten is a by-product of moist maize milling and incorporates maize fibres, oils and proteins. Because it can be produced from genetically modified material, its availability has been sporadic due to import regulations. Mr Broom says these rules have now been modified and maize gluten should be more widely available.

At an ME of 12.8MJ/kg DM, maize gluten has a good energy content. Both protein and starch content is 22%.

Crucial to the success of a maize gluten and straw diet is the quality of the straw. Dave Collett, nutritionist at KW Alternative Feeds, says the straw must be good quality or the heifers won’t eat it.

He recommends feeding 2-3kg to younger heifers and 4-6kg to older animals. “They have got to have access to as much straw as they can eat and plenty of fresh water must be available.”

At Catswood Farm, Mr Dickenson says the only issue he has had with feeding maize gluten is that it doesn’t appeal to younger calves. “When the heifers first arrive on farm at 12 weeks old they aren’t keen on it so until they are five months old we feed them a combination of soya hulls and wheat distillers and a bit of rolled barley.”

He stresses the importance of feeding barley straw. “The heifers eat it all up but when we have used wheat straw they leave half of it behind. I believe barley straw is more nutritious too.”