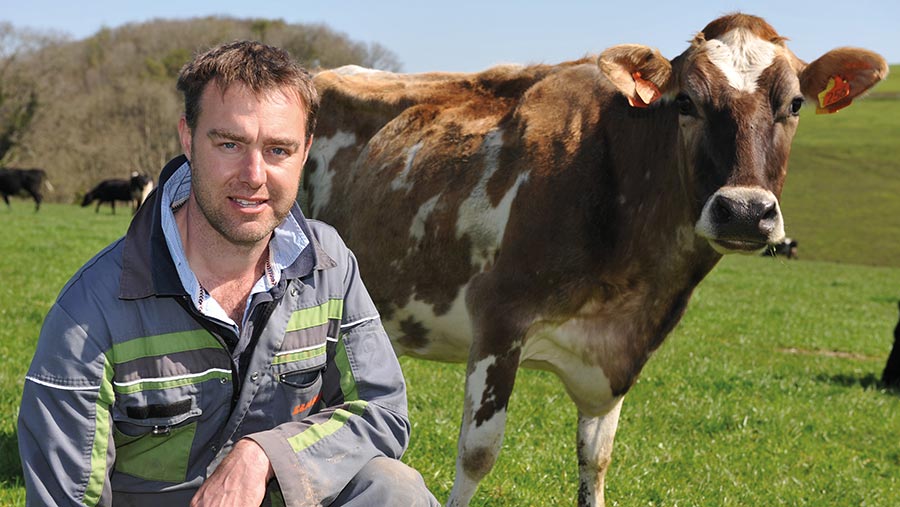 Chalky soils and robust, small cow breeds make it possible for Tom Foot and Neil Grigg to graze 600 dairy cows for most of the year.

They winter their spring-calving cross-bred herd on 100ha (247 acres) of stubble turnips and silage or hay bales, taking advantage of their dry land and mild climate.

Cows are only housed for up to four weeks before their calving due date, on a deep litter of straw in a former beef cattle shed capable of accommodating 400 cows.

This low-cost alternative to cubicle housing was initially the result of economic necessity, but the model continues to work for the business partners 10 years on.

The friends formed a partnership in 2009, taking on the tenancy of Longlands Farm, Little Bredy.

The agreement is a secured, rolling tenancy, but as there is no compensation for any investment made in buildings, it is a risk spending capital on infrastructure.

Therefore, the partners took a different approach, unpicking the traditional model for dairy farming and creating a system devoid of cubicle housing, with cows milked in mobile parlours in the fields.

“The circumstances we found ourselves in drove us down this route, but it is pleasing that what we are doing is working for the cows, as well as for us,” says Mr Foot. 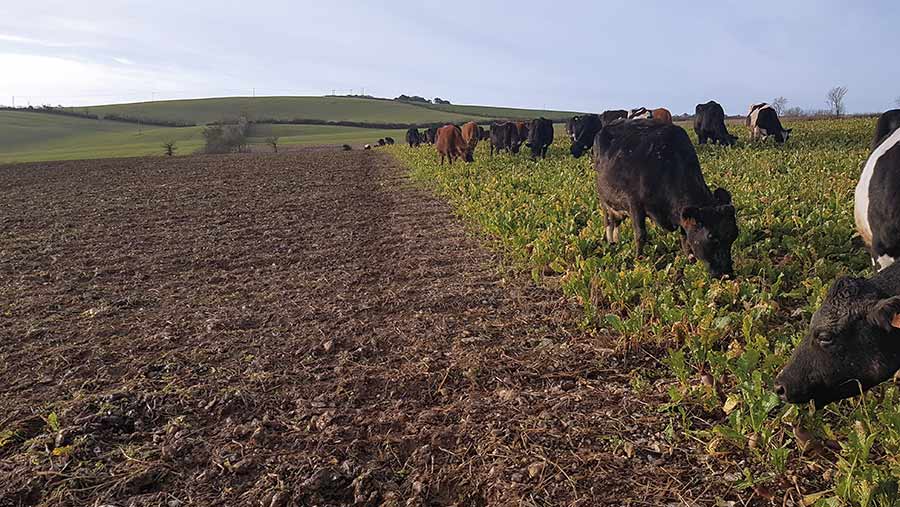 The winter system revolves around a three-month dry period and a large acreage of stubble turnips grown on arable land 10 miles from Longlands Farm.

Turnips are the crop chosen by the arable farmer the land is rented from, as it acts as a break crop for spring-sown cereals.

The cows perform well on it. “You can’t get a better feed than turnips,’’ says Mr Foot.

But the re-emergence of the flea beetle since the ban on neonicotinoid seed treatments in rapeseed crops has made it a more challenging crop to grow in recent years.

“We do get failures, but the landowner sows the crop – we only pay for what grows,’’ explains Mr Foot.

The high-energy crop is balanced with baled silage or hay as a fibre source – the more turnips available, the fewer bales needed.

In terms of dry matter intake, cows weighing 550kg need an equivalent of 2.5% of their bodyweight.

One-third of the diet needs to be in the form of roughage such as silage. Cows are strip-grazed in groups according to calving due date.

A tractor and a trailer with the capacity to transport 24 animals are used to move the cows to the crop as they are dried off from mid-December.

This spring, the turnips will all be grazed by 1 March, at which point the cows will return to Longlands Farm. 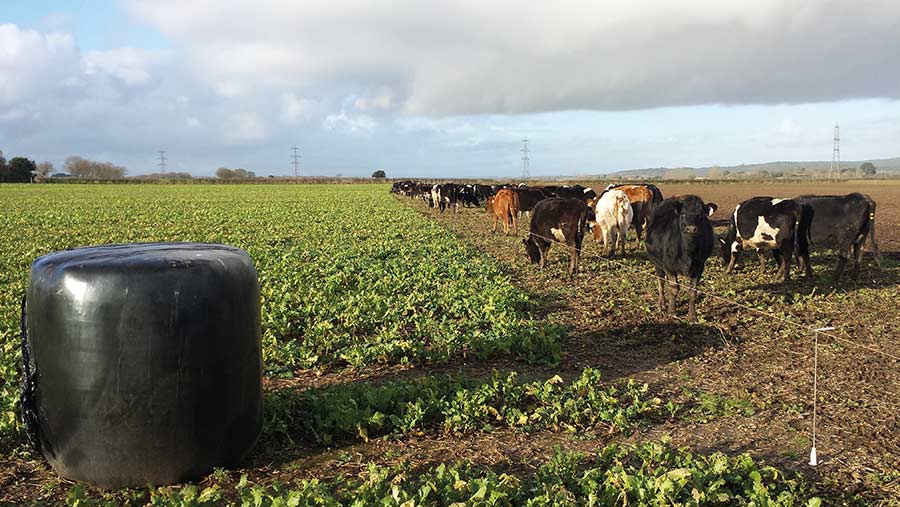 Up to 400 of the earlier-calvers are housed on silage or hay with liquid minerals.

The shed can hold up to 400 animals on straw with a linseed base – the linseed lifts the straw off the ground and provides good drainage.

Calving takes place over nine weeks and is split into three blocks to manage housing. Some 90% of the herd calves in the first three weeks from 1 March.

Once they have finished, the second group calves in the next three weeks, and the later-calving group more than six weeks after that.

Cows mainly calve indoors and are then turned out to grass. With about 30-40 calving every day, room becomes available for the cows calving later to be housed.

About 100 cows that calve in May at the tail-end of the calving period calve outdoors on deferred grazing and bales.

Benefits and drawbacks of outwintering

The system works because the soil the cows are wintered on is chalky and the cows are robust, 450kg animals, predominately Jersey and Friesian cross-breds, says Mr Foot.

“Our cows are light on their feet. There is mud and there is a little bit of sweat from moving the wires daily, but while it can be tough on people being outside all the time, it is great for our cows.

“We have an animal that is designed to live outside in the wind and rain and, indeed, the sunshine.’’

The cows don’t lose body condition on the winter-feeding system because they are fed well – higher feed demands are met during periods of adverse weather, Mr Foot adds.

“We give them a bit more feed in wet weather – you have to look at the conditions. I probably watch the weather forecast four times a day in the winter and we have skilled staff that can adapt to different conditions.”

The herd was originally milked in mobile bails, but the system has since been upgraded to two 20:40 swing-over parlours, which Mr Foot built himself.

Although open-air dairying is uncommon in the UK, Mr Foot says after 10 years he sees it as normal.

Capital, he suggests, can be the biggest challenge in dairy farming, but adds: “By looking at other ways of doing it, it can be your smallest challenge.’’