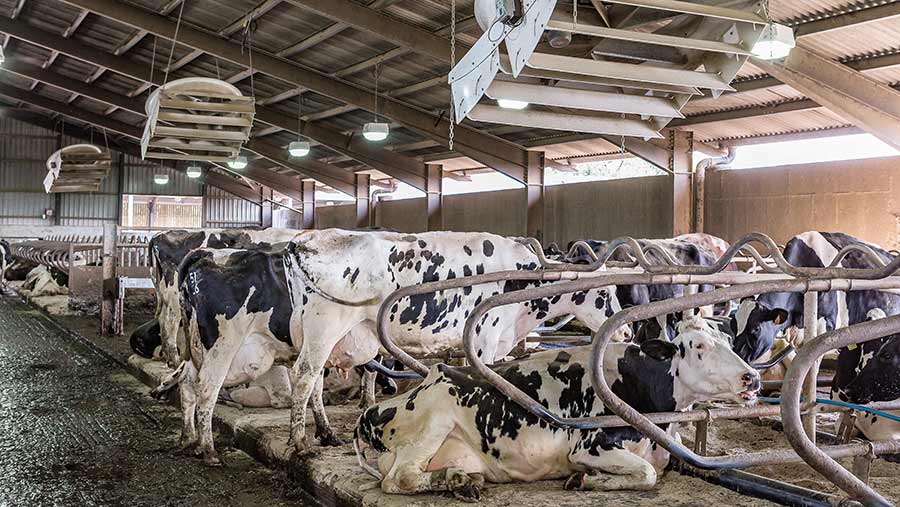 Pre-calving cows don’t have adequate room in cubicle housing and one in five is lame (score two or above).

These were just two of the concerning findings from a recent PhD study into transition cow management by Harper Adams student Emma Redfern.

Mrs Redfern carried out 56 interviews with farmers, vets, and nutritionists in the Midlands last year to establish the main challenges that occurred during late pregnancy and early lactation.

She also carried out 22 farm audits on year-round calving herds that were housed, focusing on transition cow accommodation, lameness, body condition, and had rations analysed to assess nutrients and mineral content.

Mrs Redfern says calcium, magnesium, and potassium are all interlinked and can create huge issues with milk fever if not fed at the correct rates.

“Calcium and potassium exceeded recommendations, but I could see that coming because a lot of forages are high in those. But from a milk fever point of view, it’s a total disaster,” explains Mrs Redfern.

She adds: “You don’t want to provide a lot of calcium pre-calving because you want to stimulate the cow to produce calcium on her own, from her bones.

“Potassium carries a positive charge. The higher the potassium in forage, the higher the dietary cation-anion difference [decab] value is going to be.

“[Potassium is] a nightmare for cows in two ways: it stops magnesium from being absorbed and, [because magnesium] is responsible for producing an enzyme in the kidneys to help cows mobilise calcium, if there isn’t enough magnesium in the ration, cows will struggle to regulate calcium.”

Twelve out of 22 farms did not meet the recommend pre-calver dietary magnesium concentration.

Another fundamental trace mineral that was undersupplied was selenium, which is important for calf development and immunity during pregnancy when cows are immunosuppressed.

One farmer was “triple-dosing” minerals – he would feed the same level regardless of the transition group size, says Mrs Redfern. At £1,000/t, she suggests it is something most farmers can ill afford to do.

“It’s not all down to the farmers though. One farmer’s feed rep had told him to feed a pre-calver roll and top dress with a mineral. There are many reasons these things are happening,” she adds.

Milk fever and mastitis were recognised as issues much more than metabolic diseases, such as ketosis and metritis, by the farmers interviewed.

This, Mrs Redfern suggests, is because farmers have to treat these problems and mastitis incurs milk contract penalties, unlike metabolic disease, which can be “invisible” to the eye unless post-calving checks are being carried out.

“By virtue of being able to treat these things themselves without vet intervention, there is a level of acceptance,” she adds.

Most farmers interviewed weren’t carrying out fresh cow checks, but those that did were more engaged with their vet and had milk fever under control, explains Mrs Redfern.

Many of these more engaged farmers were on aligned contracts, she adds.

Factors that must change to improve transition cow management