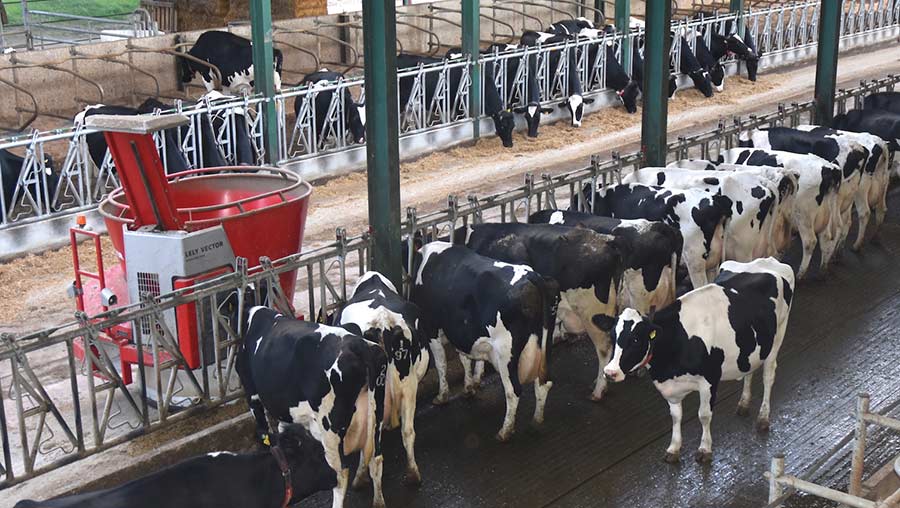 When robotic milker George Lester scaled back concentrate feed for his late lactating milkers from 5-6kg to 1kg a cow a day to reduce milk production two weeks before drying them off, he made a surprising finding.

For more than half the cows, production stopped straight away, as expected. But the others carried on producing the same amount of milk.

From this, Mr Lester realised that cows must vary in the way they use food in the same way humans do. “Some of us can eat tons and never put on any weight, while others only need to look at a burger and they pile on the pounds,” he says. “Cows are just like humans.”

See also: How to make the most of technical data from robots

Using data generated from his milking robots to support herd management decisions, he was able to halve the tonnage of nuts fed in the robots on his 180-cow dairy unit. Feed rate/litre has gone from 0.42kg/litre to 0.32kg/litre fed – a saving of £30,000.

“I was concerned that there would be a huge drop in milk [production],” says Mr Lester. “We didn’t experience that, but we did see a reduction in parlour nut use.”

Rather than setting a feed rate for the average cow in each group within the herd, he sets parameters in the concentrate optimiser software, and then every cow is treated as an individual, with her feed rate monitored and adjusted daily to achieve the most efficient milk production.

“We’re not trying to reduce the amount of energy the cows get,” he says. “We have a Vector system, too, so there is always fresh food in front of the cows.

“We’re trying to encourage them to take more forage and less concentrate for the same amount of milk. We’re aiming for the most efficient milk production, rather than the most milk production. We may not be producing quite as much milk, but it’s a much healthier way to run the herd.”

The concept comes from the Netherlands, says Mr Lester. There, regulations on phosphate levels prevent dairy farmers from increasing cow numbers to increase milk production on a given area of land, and land prices are two-and-a-half times those in the UK.

Instead, farmers are looking to technological advances to help improve their profit margins.

Before using the concentrate optimiser, Mr Lester calculated feed levels based on average performance. This created inefficiencies, which he first noticed in overweight cows at drying-off time.

Now, as well as improving margins, he is avoiding potential longer-term problems associated with dry, fat cows such as calving difficulties and a higher risk of metabolic disease and reduced dry matter intake after calving in future lactations.

Mr Lester explained his finding, and the savings that resulted, at a Dairy-Tech Online webinar (4 February).