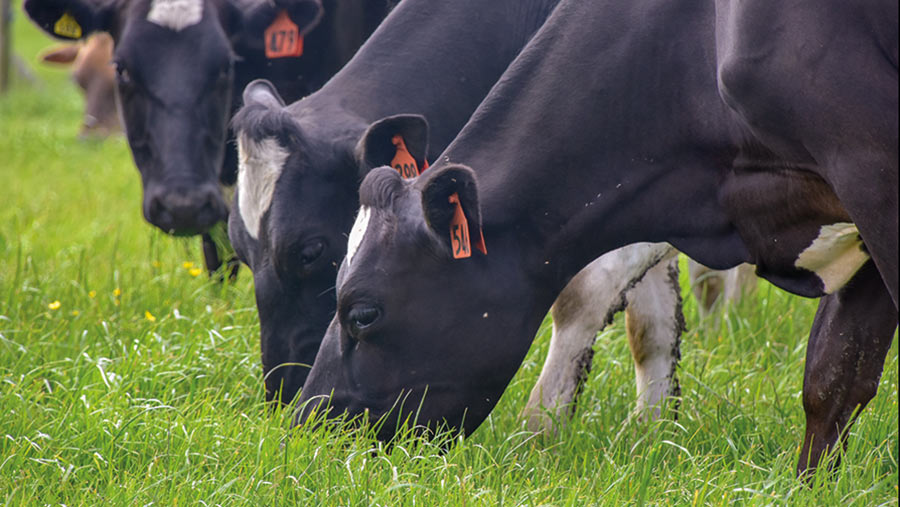 When he travelled to the UK in 2017-18, he hadn’t planned to work on an intensive dairy unit, but after his harvesting placement came to an end, one of his friends at the local rugby club got him the job “over a beer”.

He spent the next five months working on the three-times-a-day unit at Green Farm, Longnor, Shropshire.

“I had no idea what I was getting myself into or what the system was like. I thought the majority of UK systems were inside in the winter and outside in the spring and summer. I didn’t know there were zero-grazed herds,” he explains.

Now in his third season back on the family-owned, mixed farm in Palmerston North, Manawatu, where he manages a 700-cow dairy, Mr Tennant reflects it was a worthwhile punt, even though the two systems are “worlds apart”.

Not only did it focus his attention on making better-quality forage, he says he has really sharpened up his cow management and the business has reaped rewards in the process.

Cases of milk fever have fallen from 10% to 3.5% and milk solids have increased 40kg a cow.

Arguably one of the biggest learning curves has been around forage quality.

While he wouldn’t be keen, or need, to adopt Green Farm’s multi-cut ethos, he now aims to make 11ME plus silage from the one cut they take in late spring.

“I was impressed with the silage quality. This year we have tried to increase our quality by cutting grass a bit earlier when it’s still leafy rather than allowing it to change to a reproductive state,” adds Mr Tennant.

“We sell our beef as yearlings, so that creates surplus for silage when we clear them out in the spring. In New Zealand the most profitable way to harvest grass is with a grazing animal, so we only need enough silage to supplement pasture growth deficits, not to prop up high stocking rates.

“In the North Island, where we farm, you only really get one opportunity at making silage and so when we do, we need to make sure it’s good quality.”

Surplus bales are made from the grazing platform, but they don’t have designated silage ground, which he says is pretty normal with New Zealand farmers looking to maximise each bite of grass they can.

Transition cows have always received buffer feed, but nutrition has been improved further by moving to a dietary cation-anion difference (DCAD) diet in the past year.

As they get closer to calving (at least two weeks before their due date), cows are moved into “springer mobs” of 200, where they are offered less grass (5kg DM) and buffer feed increases to 60% of the total diet. This comprises maize, palm kernel and hay, as well as minerals such as anionic salts.

Grass is tested for potassium/DCAD to identify which paddocks are safe for the springers.

“It’s not a traditional Kiwi transition strategy. Traditionally you would feed grass and a little bit of hay to meet 80% of the cow’s requirements, but with our production goals we were ending up with too much ketosis and milk fever.” 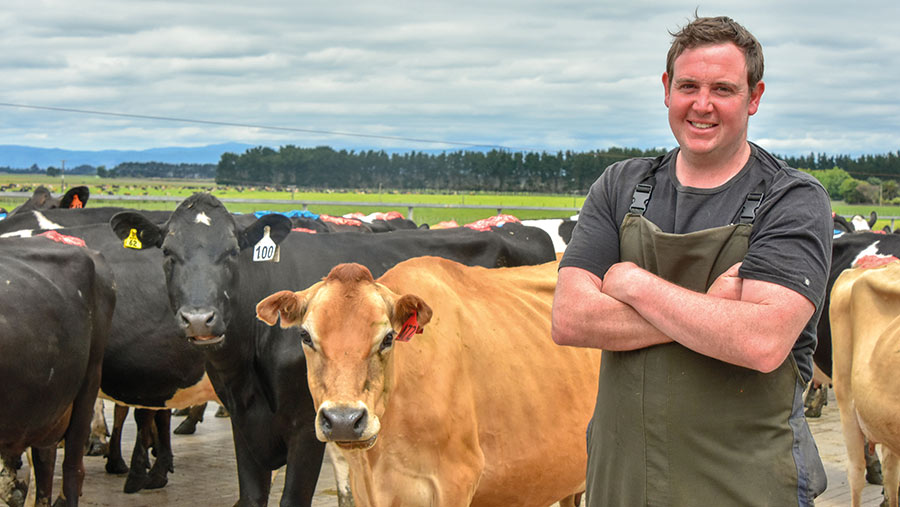 Although Mr Tennant concedes feed costs are higher at around NZ$1.50 (77p) a cow/day in the transition mob, he can see an improvement in production, cow health and body condition, which have more than covered the cost.

“If your long-term goal is to produce 480-500kg of milk solids (MS)/season on dry land clay soils, you won’t get to it the old school way. You will end up with poorly conditioned cows that won’t get in calf.

“We want to increase our six-week in-calf rate to 80%, and to achieve that cows must be in top condition going into calving. We must ensure we minimise condition loss in the month post calving.”

For the past two seasons he has taken bloods from fresh calvers to test for ketosis – something he saw being done at Green Farm. Results have improved to average 0.8 millimoles (mmol)/litre (the target is below 1.2).

“We are also hitting peak milk production early. After two weeks they are humming along.”

Fresh calvers go into a colostrum mob for five days and are milked once a day. Mr Tennant believes this has also helped reduce milk fever. After this they join the herd and are milked twice daily, peaking at 2.3-2.4kg of MS/day, and will move back to once a day as soon as yields drop to 1.4-1.6kg of MS/day in late summer.

When he first returned home Mr Tennant was able to quickly detect an outbreak of E coli mastitis, having spent some time treating cases on the farm in the UK.

“I wasn’t really aware of E coli mastitis before I went to England because it’s not that common over here, but we had a few toxic cases and I was right on to it and then we were able to figure out the cause and fix it.

“We isolated the problem to our feed pad and underpass areas, so we starting scraping these more often.”

Perhaps most surprisingly, it has changed his approach to labour costs.

“Matthew Thomas [from Green Farm] seemed to have a lot of people on the books he could call on anytime and I thought that was pretty good when you needed to get jobs done. In New Zealand the attitude has been to keep labour inputs low, but I think you can miss out on opportunities by taking that approach.”

Mr Tennant took on another full-time member of staff when he got home, which he says enables him to “work on the business not just in it”.

Two other areas where he thinks New Zealand farms can learn from the UK is managing cows on an individual basis and using technology to achieve this.

“You guys manage cows as individuals whereas we manage herds. You have the technology of milk monitoring and I think we are a little bit behind the times with that. We only milk record four times a year and it’s hard to make decisions at an individual cow level based on that data.”

Mr Tennant reckons more farmers should step outside their comfort zone and learn about different systems.

“I was lucky I ended up on a farm doing something different – it was a huge eye opener. You just have to come home and look at what can work and what wouldn’t. I think there’s always something you can learn from other systems.”