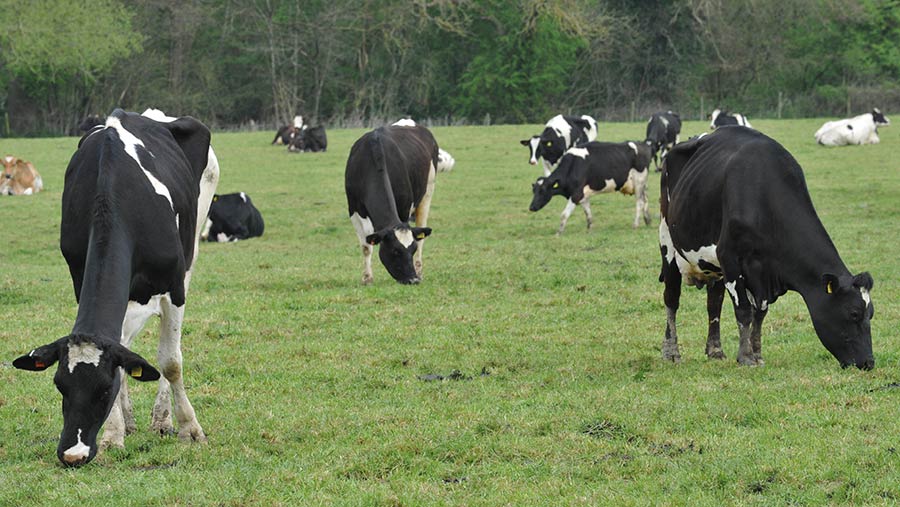 Transitioning a year-round calving housed herd to an autumn block-calving grazed herd has halved concentrate inputs at a college farm to 1.7t a cow a year and increased milk produced from forage fivefold, without loss of milk yield.

The changes at North Shropshire College’s farm at Walford were introduced in 2019, when Tom Moore took over as farm manager.

The business was making a huge loss – its comparable farm profit figures from 2018 show a loss of £442,452. Cost of production was 63p/litre, with feed and bedding accounting for 30p/litre.

See also: How one dairy farm moved to a regenerative grazing system

“Something drastic had to happen,” says Mr Moore. “The principal asked for my ideas, and I told him that there was grass out there and that we needed to graze it. He said: ‘Do it’.”

With a herd of 130 Holstein cows, the farm was also understocked, at 1.6 livestock units/ha.

With support from Sean Chubb at dairy company LIC, Mr Moore put a plan in place to make a series of changes.

A 15-week calving block was the target for the first year of the transition, to catch as many cows as possible.

To get a defined block, the expectation was to lose 30% of the herd in the first 18 months due to cow type, and because fertility had historically been poor.

But fertility-monitoring technology was introduced to detect silent heats and only 15% of cows exited the herd.

In autumn 2021 breeding was tightened to a 12-week block.

In the first year of the transition, LIC sires that scored highly for small stature, milk solids and fertility were used to produce a better grazing cow. Short-gestation bulls were used at the back end of the breeding period.

There was an emphasis on Jersey genetics in 2020 to reduce stature further and to boost butterfat and protein.

Size currently averages 650kg, and the aim is to achieve a 550-600kg cow that is big enough to produce good quantities of milk at housing, but small enough not to poach the land when grazing.

“The cross-bred is the perfect cow for this system,” says Mr Moore. “I want a cow that can graze, but can still do the job inside.” 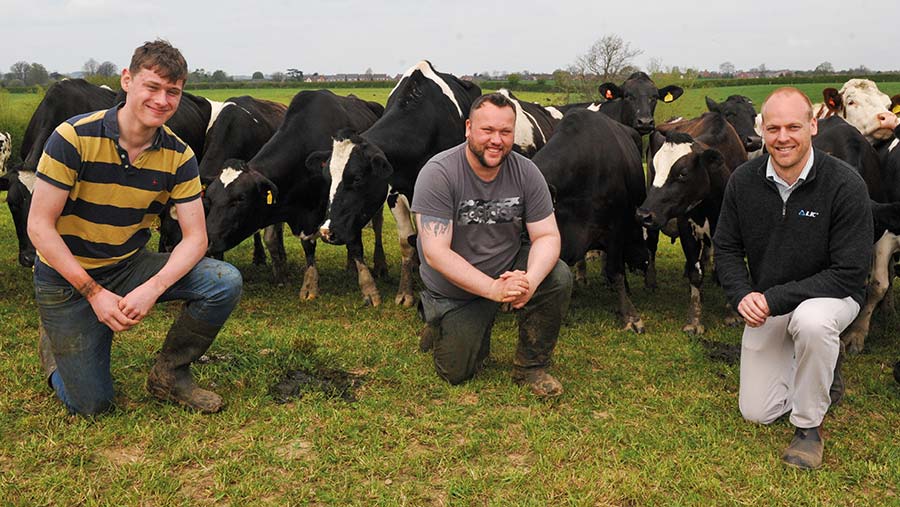 “Cow mentality has changed – they now want to go outside. They see themselves as grazing cows,” says Mr Moore.

“We turned them out on 14 January this year because we had so much grass, and they didn’t need persuading.”

If 50% of the farm can be grazed by the end of February, it puts it in a strong position to grow good amounts of grass over the year, he says.

An investment of £1,000 a cow was made in grazing infrastructure, including tracks topped with sand, fencing, water systems, a wintering pad and an upgrade of the slurry storage system.

Cows are now at grass for eight months of the year.

Under the previous housed system, 50% of the grazing platform was used to grow maize. That area has been restored to grass with a standard grazing mix of tetraploids and diploids, and 5kg/ha of clover.

In 2021, the farm grew an average of 12t DM/ha, with some of the reseeds producing 17t DM/ha. The highest covers recorded on the farm averaged 3,600kg DM/ha.

Cows are now producing an average of 5,000 litres of milk from forage, up from just 985 litres in 2018, and Mr Moore expects that to increase again this year. “They are showing no signs of slowing down,” he says.

“A 24-hour break suits our cows better than 12-hour paddocks,” says Mr Moore. “We get more milk from them because they are not restricted – but the trick is to know when to turn them back in and when not to.”

For that reason, the first grazing is always at night, as they occasionally need to be moved to a fresh break sooner.

Consistent grazing residuals of 1,500kg DM/ha are being achieved. A higher stocking rate has increased grass use to 80%.

Producing good-quality winter forage is important, too. Three cuts of silage are taken, and maize acreage has been halved to 20ha (49 acres). The 2021 crop analysed at 11.7% metabolisable energy, 35% starch and 35% DM.

By grazing and producing high-quality forage, concentrate feed has halved from 3.5t a cow a year to 1.7t. This has had a big effect on feed costs.

The herd is managed as one at grass, but in-parlour feeders have been installed to allow cows to be fed individually in the parlour.

This investment has been returned in the first 12 months by targeted feeding that has reduced the annual feed bill by £40,000.

The multiple changes have been achieved without loss of production – cows are still averaging 8,000 litres.

This has enabled the business to secure a new milk contract with cheesemaker Healers. It will make the switch from Muller, which is supplied on a liquid contract, on 1 August.

Mr Moore says without the system overhaul the dairy herd would have been sold by now.

He now sees a very positive future for the business. The farm is budgeted to make a profit of £32,797 this year.

“We have put ourselves in control, not the cows. If we give them decent grass, we know they will graze it.”

Under the year-round calving system, the conception rate was 24% – and as low as 16% in some years – and the number of services for each conception averaged 3.45.

In the 2021-22 breeding season, conception rate had increased to 55% and services for each conception reduced by more than half to 1.4.

Synchronised breeding with sexed semen is used on the heifers, and 87% are due to calve in the first six weeks.