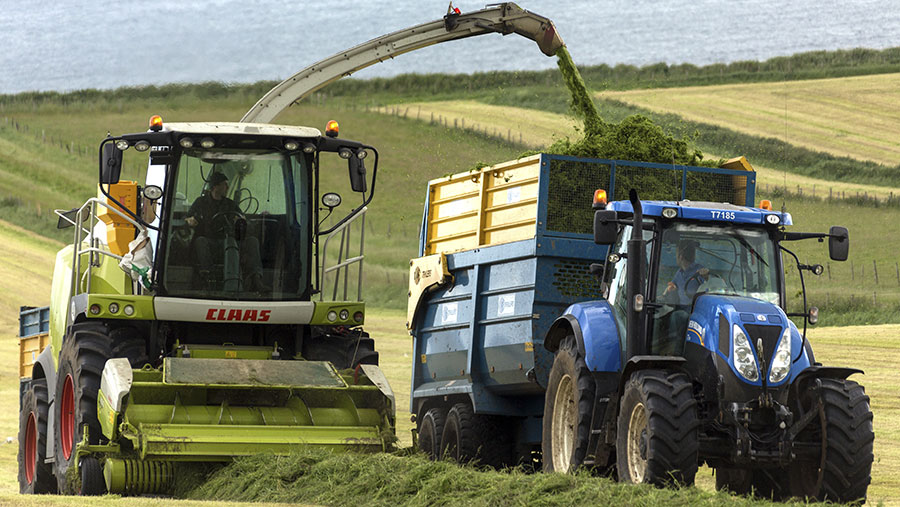 Farmers that cut early in April and early May generally managed to get a high-energy, but low-protein crop.

However, she stresses that farmers must be aware of the different amino acid profile and lower bypass protein levels of rape.

“Typically, for a 30-litre diet, I would feed 3kg of rape along with energy sources and 2.25kg of soya to achieve a similar result.

“The soya does have increased energy and higher digestible undegradable protein [DUP], but the rape is a more locally sourced, sustainable option to take, so the key is to balance protein sources to get the right DUP and amino acid level.”

She says farms that want to maintain milk solids for contract purposes and increase NDF levels in the diet could turn to soya hulls (30.5% NDF) or sugar beet (18% NDF) and present silages well to maintain dry matter intakes.

“To ensure good intakes, rations should be pushed up four to six times a day. Ration presentation and access is also key for palatability and will drive forward cost-effective feeding, production, and cow health.”

“Silage with the correct chop length of 3-4cm will also improve mixing and will help maximise the results from your silage,” says Ms Alvis.

Steve Chapman, director of SC Nutrition, Cornwall, says a protected urea source would suit some systems looking to get protein into the rations and support a functioning rumen with rumen-degradable protein.

He adds: “Even with protected urea being used, there could be a chance to include some feed-grade urea as well, particularly where there is a lot of starch and sugar in the diet to help reduce protein costs even further.”

SC Nutrition’s Emma Tristram says some farms that gambled on waiting until May to take a later first cut had been delayed by wet weather and had very fibrous silages.

Comparing a very early crop and a very late crop analysis, she said a 13% difference in NDF (36.6% v 49.6%) means some later first cuts would be hard for cows to digest.

“That 13% difference is an extra 1.8kg of NDF on a cow getting through 14kg of forage dry matter,” explains Ms Tristram. “That is going to slow the cow up, and if you really want to get 15-16kg of forage into a high-yielding cow, you may struggle.”