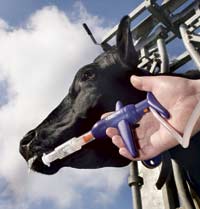 Farmers importing livestock into the UK have been warned to take extra care to protect their animals against bluetongue.

Renewing its call for livestock farmers to vaccinate against the disease, the NFU said an increase in cattle imports meant the threat of the bluetongue still existed.

It said farmers should continue to vaccinate cattle and sheep against the disease and warned them to be vigilant to prevent its spread.

John Mercer, NFU chief livestock adviser, said vaccination was the only way to properly protect stock from the virus.

“We are concerned about increasing numbers of imported animals entering the UK,” he said.

“Ultimately it’s a producer’s business decision whether they import stock or not.

“However we would ask that producers think long and hard about the risks.

“They could bring bluetongue into the country and with it potential impact on their neighbours and industry as a whole.”

Mr Mercer said farmers importing stock needed to be certain the animals had been correctly vaccinated or had been tested to make sure they were not carrying the virus.

“We have had no recent outbreaks of bluetongue due to the positive vaccination campaign that British farmers have undertaken,” he added.

“It would be absolutely disastrous if this good work was undone and farmers themselves were to import the virus which could then circulate.

“Any signs of bluetongue in animals or any signs of illness in cattle should be reported to a local Animal Health office immediately.”