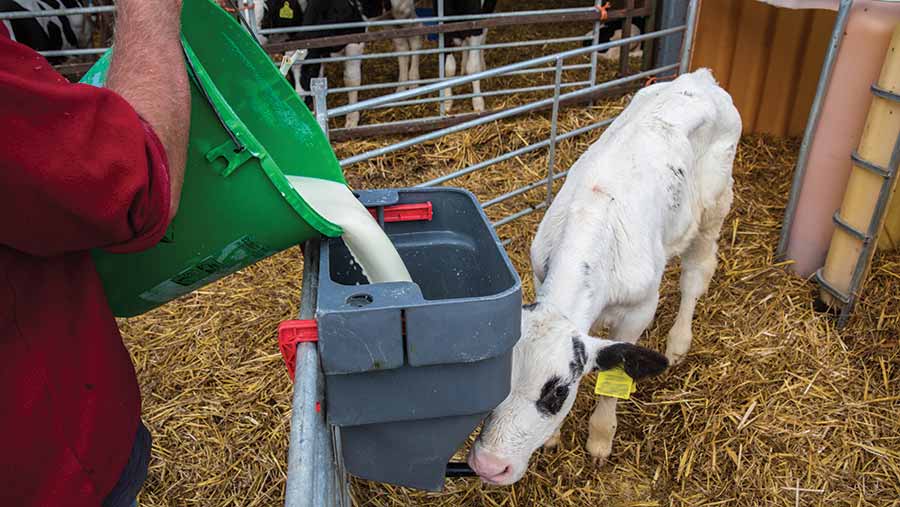 Separating dairy calves from their mothers within six hours of birth is helping one dairy farmer tackle Johne’s disease as well as improving calf growth rates.

West Sussex farmer David Hamilton-Fox, Cowdray Estate, started trialling the early removal of calves in autumn 2014 as part of the plan to tackle what he calls the “niggling irritation” of Johne’s in the herd.

Previously he couldn’t separate calves from their mother until 72 hours due to organic requirements. However, since switching to conventional farming there is no minimum requirement.

Johne’s is a chronic disease spread in faeces, which causes inflammation of the gut and prevents nutrient intake. Calves are most susceptible to the disease because they have poor immunity – just 0.5g of dung is enough to cause infection.

The bacterium has an incubation period of three to five years, which essentially means a cow might be infected, but not be infectious or affected. This makes it difficult to test for it in younger cattle, because antibodies are often not present

Johne’s has been picked up in some of the 850 milking cows on the Cowdray Estate, which are spread across three units.

The farm’s vet, Maarten Boers from the Livestock Partnership, says while they didn’t perceive Johne’s as a problem, he saw it as a ticking time bomb. “That’s why we are acting now to prevent an outbreak.”

However, it will be three to four years before improvements will be seen in the level of Johne’s infection.

The screening programme involves quarterly whole-herd milk testing and, most importantly, the cows that test positive are managed differently to minimise the risk of infection from these animals or their dung to negative cows and calves.

Vet Sarah Holmes, who works alongside Mr Boers, believes calf immunity has already improved since removing the calves early as they are receiving colostrum of a known status.

Calves on the increased milk powder regime are growing at more than 0.8kg/day. Prior to the change they received 600g/day and were averaging 0.5-0.6kg/day from birth to weaning.

As calves are most efficient at converting feed to growth, money spent at this age on good-quality powder and an increased feed amount brings the biggest benefit to the farm, explains Ms Holmes.

Calves are fed outside their pen, with fresh calf nuts available at the gate at all times from birth. Key to improving calf nut intake has been positioning fresh food at the gate where they spend time waiting for their milk feed.

Weaning age has also decreased by about two weeks as a result of these changes, saving time and money in terms of labour.

If the positive results from these changes continue, Ms Holmes believes calves will be at the correct weight for service by 12-15 months and will calve before two years of age.

Ms Holmes says results have revealed calves with lower protein levels correspond to calves that received bagged colostrum outside the recommended time interval, for example, those born at night.

“Those calves born early in the block when there was a poor store of good-quality colostrum also appeared to have a lower passive transfer,” she adds.

Now the vets send a weekly email of immunity results to the herdsman, which has helped focus their attention on giving the calves the right amount of colostrum as soon as possible.

But the benefits of removing calves early have not been limited to youngstock. The transition into the milking routine for cows has been smoother and has reduced stress. There is also little hindrance to milk let-down, says Mr Boers.

This has a positive effect on mastitis levels, as overmilking is less likely to occur, reducing teat-end lesions.

Milk yields are up to 7,200 litres a cow a year, from 6,400 litres two years ago. And while Mr Hamilton-Fox says it is too early to say if peak yields will be reached quicker, he hopes the change in protocol and smooth transition to the parlour routine will boost milk production.

He says cows are also much easier to manage in the milking herd as the herdsmen don’t have a separate group of cows with calves at foot in a calving field.

“There are no cows bellowing and they are straight off to the food trough,” says Mr Hamilton-Fox.

While the organic regime resulted in good, strong calves and cows fit to rejoin the milking herd, there was a huge amount of stress at separation.

“Leaving the cows and calves together results in bonding. Removing them straight away gives no opportunity for bonding and far less stress, increasing cow feed intakes.”