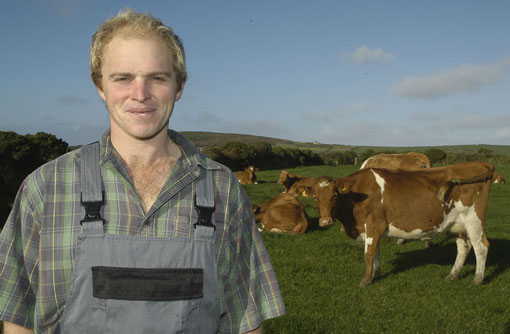 A long run of not seeing the vet came to an abrupt end on Saturday evening when we had a heifer with a twisted uterus that resulted in a Caesarean, only the second one I can remember.

Until then things were going reasonably well except for a little bit of lameness of late which is probably a result of cows standing in the collecting yard for too long each day and regrettably not foot bathing so early in the winter as we have in the past. Fortunately none of it has been too serious other than the one that decided to kick me in the face while I trimmed her feet.

Cows seem to be eating the whole crop peas and barley OK although I’m not so sure it’s making any difference to the milk cheque, but it does seem that the crop left plenty of nitrogen for the following crop of cabbage which is growing well with plenty of colour. We started cutting on 2 January with pleasing yields and quality.

In between jobs we have built a small lean-to which didn’t take too long to fill up as soon as the roof was on, and also started repairing the 35 which is having a complete overhaul while in the workshop. Hopefully it will be finished by June as we are excited that Sam is expecting in the middle of June so I may not have a lot of time to fiddle with nuts and bolts.