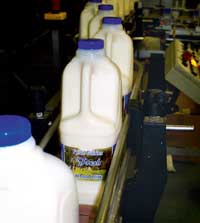 Adding a premium to quality liquid milk is the main aim of a new Lancashire dairy business. Jeremy Hunt looks at its success so far

Howey Hegarty had a dream when he set up Fylde Dairies in Lancashire. He wanted the company to become one of the most successful dairy businesses in the UK.

He was also determined that the milk producers supplying the business would share in that success. Judging by the strides it has made since it was set-up up in January 2007, the dream is on course to becoming a reality.

Mr Hegarty used his experience in the food service sector to develop the concept, which relies on the fact that the Fylde region is one of the most fertile grassland growing areas of the UK, producing milk that he believes has hitherto been seriously under­valued. He put the concept to Fylde dairy farmers John Sanderson from Kirkham and Philip Critchley from Wrea Green. Both were well known for the quality of their milk and grasped the opportunity to get involved.

With no funding beyond a modest overdraft facility, Mr Hegarty sourced his first supplies – barely 10,000 litres in the first week – from the two foundation farms. He had his first customers lined up, had the milk processed and bottled on contract, and the business was launched. In that same year Fylde Dairies won NatWest’s award for the best new start-up business.

Mr Sanderson, who milks 220 cows, says: “We were sick of being held over a barrel by the big companies. The opportunity to get involved in Fylde Dairies came at the right time. On price we’re about two-thirds up the ladder. We’re not getting the highest price, but we’re producing high-quality milk and selling on that image. It’s the only way to compete.”


Messrs Hegarty, Sanderson and Critchley remain the three sole shareholders of the company, which is run from a depot at Bamber Bridge near Preston and also from new premises at Roman Way, Preston. The day-to-day management, which can include making milk deliveries, is undertaken by Mr Hegarty.

“Fylde Dairies will become a premier dairy business because we’ve already proved that we’re producing milk of outstanding quality from the best grassland in the UK and have a deep commitment from our farmers,” he says.

“I want those supplying us to be the highest-paid producers in the UK. I want the workforce that makes all this happen to be proud to be associated with a product that’s head and shoulders above its rivals. In the next two years, I believe Fylde Dairies will have increased the amount of milk it handles by at least four times.”

The European Food Safety and Inspection Service does all the farm assurance for Fylde’s suppliers, Mr Hegarty explains. “The EFSIS auditor, in September 2007, told us that we’d got the best farm assurance results in the UK and were in the top 1% for milk quality. And NML [National Milk Laboratories] has recently told us that one of our farmers is producing milk with the lowest somatic cell count they have ever recorded.

“Selling is easy if you’ve got the right product, and we have had that from the outset. But in the early days, I over-sold and we very quickly needed more milk. But it was at a time when milk producers were getting nervous about changing contracts and from the 15 farmers we needed to come on board, we signed up seven.

The company now takes milk from nine Fylde farms, producing 240,000 litres a week. “But if another 10 Fylde dairy farmers came to me with milk of the right quality I’d be happy to take them on.”

Mr Hegarty has a simple answer tothose dairy farmers who question why they should supply Fylde Dairies. “I want to earn them the highest price possible for their milk. Farmers are supplying a market that has proved it will give a commitment to buying milk from a traceable source and milk that’s of the highest possible hygiene standard. If they are producing the highest quality milk in the UK from the best grassland in the UK they deserve a premium price.”

Last year, producers received up to 28p/litre and, despite the downward pressure this year, prices for April are still up to 25p/litre, depending on bonuses. “We have a strong brand, but we have to stay competitive,” Mr Hegarty says.

Fylde Dairies supplies the retail and food service trade nationwide, including sizeable contracts with Asda and Cooltrader, and is about to start supplying Sainsbury’s. Milk goes into poly-bottles, which carry distinct labels designed by Mr Hegarty. The labels carry a wealth of information, including photos of the producers, a map of the Fylde, nutritional information and the traceability “ethos” that underpins the company.

“We were the only dairy company to hold STS, BRC (British Retail Consortium) and Efsis certification standards at the same time,” says Mr Hegarty.

As well as the full range of liquid milk, Fylde Dairies produces cream and a large range of cheeses made by leading Lancashire cheese maker Sandhams. A Fylde Dairies-branded butter will be launched this year with another respected cheese and butter manufacturer. A high street outlet – Fylde Dairies Retail Ð has been opened in Chorley, marketing the products. Three more outlets are planned for this summer in a well-known department store chain. From April 2009, 4.25m litres a year are earmarked for cheese making.

Farmers who supply Fylde Dairies must sign up to a 12-month contract and there is a three-month get-out clause. Milk must meet strict hygiene standards. Somatic cell counts must be below 200,000. “We aren’t here to tell our producers how to farm, but we under­take a farm visit of every supplier before taking any milk.”

Milk is collected daily – using nine vehicles – and after being processed locally it is on supermarket shelves within 24 hours. Some Asda stores have been selling milk less than six hours from the time it left the farm.

Fylde farmer Stephen Raby milks 120 cows at Fern Hill Farm, Preesall, and is on course to expand the herd. “We were frustrated with Dairy Farmers of Britain and felt we deserved a better price. Our expansion will involve opening a new farm shop, so to market milk from a company we supply seemed a great marketing opportunity.”

With an average cell count of 160,000 and bactoscan at 20-25, his milk meets Fylde Dairies’ quality criteria. “We feel secure supplying Fylde Dairies. We’re producing a product that’s finally being recognised – both locally and further afield Ð for its quality. I feel confident about the future now that we’re producing milk that can be marketed on its image and identity.”

Fylde farmer Stephen Raby milks 120 cows at Fern Hill Farm, Preesall, and is on course to expand the herd. “We were frustrated with Dairy Farmers of Britain and felt we deserved a better price. Our expansion will involve opening a new farm shop, so to market milk from a company we supply seemed a great marketing opportunity.”

With an average cell count of 160,000 and bactoscan at 20-25, his milk meets Fylde Dairies’ quality criteria. “We feel secure supplying Fylde Dairies. We’re producing a product that’s finally being recognised – both locally and further afield – for its quality. I feel confident about the future now that we’re producing milk that can be marketed on its image and identity.”

Fylde Dairies supplies local food to wholesaler Allfresh – and there can be no stronger supporter of the company’s ethos than Allfresh managing director John Garner.

“We’ve been customers from the start and are fully behind what Fylde Dairies is trying to do. We’re based on the Fylde, so it’s a great opportunity for us to support the area’s farmers and to know that we’re not only providing our customers with milk from local farms, but also that it’s some of the highest quality milk produced in the UK,” says Mr Garner.